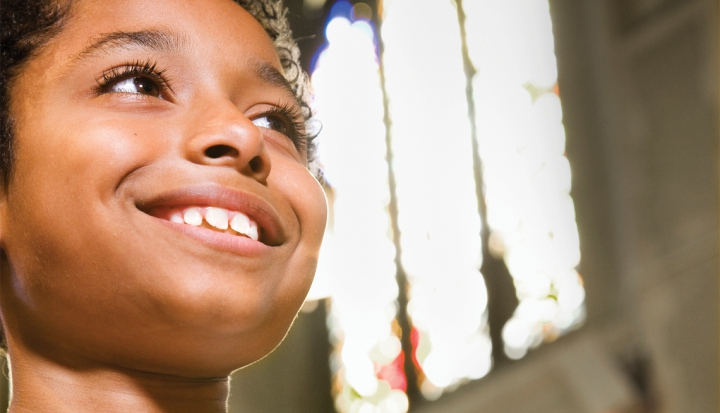 When our son Liam, now 20, was in second grade, I have a clear memory of his focus on Catholicism. It was the year of his first communion, and in his Catholic school discussions of the faith, sacraments, and the connection to his life permeated every activity.

Interestingly little Liam often used “Catholic” the way many people use the word “Christian,” as a way to describe a person acting with compassion. The first time I noticed it was when he and I were walking to his Little League game. About a half block from the field, we encountered a little girl who was crying because she couldn’t find her mom. I asked the girl a few questions and then helped her locate her mother, who had just run to the car to grab her sunglasses. When we were out of earshot of the girl, Liam turned to me.

“Wow, Mom, that was really Catholic of you,” he said. “That girl stopped crying when she saw her mom. You helped her to stop crying.”

I thanked Liam and wondered if I should address the fact that what I did wasn’t specifically Catholic or even Christian. It was just the right thing to do—the thing that any good adult, regardless of their faith, or lack of faith, would do in a similar circumstance.

But I didn’t say anything. While helping the girl wasn’t specifically a Catholic action, it was in its own small way in keeping with Catholic values. I decided I had plenty of opportunity to correct Liam for the many other things he said that really were wrong (most to his little sisters or older brother) and I should let this one go.

But in the next few weeks, I noticed “Catholic: The Adjective” cropping up quite a bit in Liam’s day-to-day speech.

“Jamie, thanks for sharing your chips with me. That’s very Catholic of you.”

“That cartoon has people fighting. It doesn’t seem very Catholic.”

“Mrs. Doerr smiles all the time. She is really Catholic.”

Every time I heard Liam saying something like this, it was jarring. On one hand, I felt that Liam was exactly right. TV shows with violence aren’t in keeping with Catholic values, but sharing and smiling are. I knew that if Liam could grow up associating being a Catholic with how people should be acting in their day-to-day life, Catholicism would have done its job.

Without understanding what he was saying, Liam was right to assert that to be Catholic should be synonymous with being very good. Being a good Catholic is so much bigger than just noting the rules that make Catholicism different than other Christian religions. Too often when I hear someone described as “very Catholic” or “a good Catholic” it relates to only one thing—the many children in the family. If we truly look at the teachings of the Catholic Church, however—teachings on poverty and social justice along with Humane Vitae—we find that being “very Catholic” can look a lot of different ways, but all of them will somehow involve reaching out to others.

The thing I didn’t want for 7-year-old Liam, though, was for him to grow up thinking that Catholics have cornered the market on the truth. As a second grader, due to his Catholic school and extended family, he had limited experience with non-Catholics, and we had to work on broadening his horizons. I went to a funeral of a friend’s grandmother that year and left the order of worship on the table.

“Christ Episcopal Church,” he read, sounding out Episcopal syllable by syllable. He paused. “Do people who are Episcopal believe in God?”

I laughed, thinking of the service, where the only thing different than the Catholic Mass seemed to be that we knelt to receive communion. It was a good opportunity to teach Liam about the many Christian faiths. This led to a discussion about the many Orthodox Jews in our neighborhood and how, while they do not believe Jesus is the messiah, they share the same belief in God with us.

That night, when I was tucking Liam in bed, we said prayers together. He had a long list—the school secretary who had cancer, his great uncles, his sister Teenasia who was going through a hard time, and his dad, who was finishing his eighth grade report cards that night. After Liam finished and I kissed him goodnight, he smiled at me in the darkness.

I closed the door, feeling that Liam put into words my own belief about Catholicism. There’s a piece of the truth here. And saying there is truth here does not diminish the truth that can be found in other religions. But this is what I have. And like Liam, this is what I love.