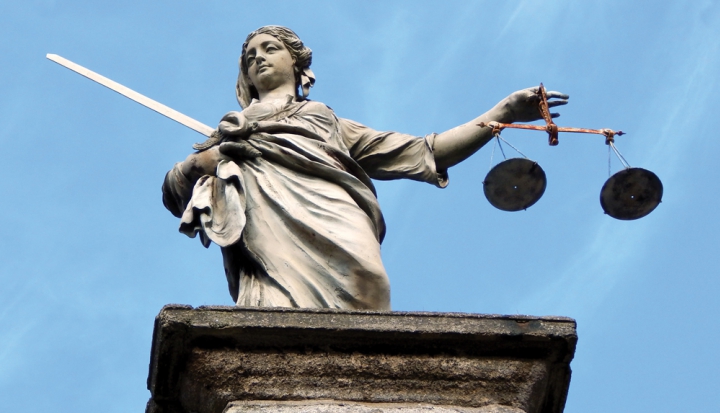 Abiding by the law is a preeminent American value, yet a fixation with the letter of the law is often used to perpetuate injustice. Scripture says that law is important but also warns against a narrow focus on law at the expense of dignity or mercy. In one of his more scandalous moments, Jesus breaks religious law when he heals the sick on the Sabbath. According to Deuteronomy, the legal punishment for a woman caught in adultery was death. But Jesus intervenes on behalf of the woman caught in adultery. “She broke the law” was not all that mattered.

A just law is one that upholds human dignity and is directed at the common good. For St. Augustine and Thomas Aquinas, laws that fail to do so are unjust and improper. An unjust law is not binding upon Christian consciences. Movements for justice often invoke this basic Christian tradition challenging unjust laws and structures. During the violent and repressive military dictatorship in El Salvador, Oscar Romero urged members of the police and military to disobey unjust orders and stop the repression. Preaching days before his assassination, Romero reminded the faithful, “The law has to be at the service of human dignity and not focused on legal details that so often can trample people’s honor.” Any law that dehumanizes or violates human dignity is unjust.

In contrast, American culture often reduces law and justice so that colloquially legal and just are used interchangeably. This is perhaps most evident and dangerous with regard to immigration and racial justice. After a parish panel on immigration I sat on last year, an older man charged toward the table furious. “How dare you malign Martin Luther King Jr. and suggest he advocated breaking the law! He would never have broken the law,” he insisted.

Conflating law and justice requires ignoring history. Slavery and segregation were legal but they were never just. In his “Letter from a Birmingham Jail” King reminded his critics that “everything Hitler did in Germany was legal” and it was illegal to “aid and comfort” a Jewish person in Hitler’s Germany. King broke unjust laws and organized others to do so as well. Civil disobedience as practiced by King exemplifies a deep respect for rule of law while refusing to idolize a particular legal system. Laws matter, but they must be just in both form and application.

King noticed the greatest opposition to dismantling unjust laws often comes from those “more devoted to order than to justice” and those who have a “shallow understanding” of the situation. Family histories of immigration are one example of how a shallow understanding by people of good will impedes justice and prioritizes the status quo over justice. Today’s immigrants are pitted against earlier “good immigrants” who came the “right way” and followed the law.

In 1848 my ancestors Timothy and Margaret Clarke, newlyweds from Ireland, boarded a boat for the United States, fleeing poverty and famine. They are the quintessential example of “the right way” invoked in today’s public debate. However, if my ancestors were subject to today’s immigration laws, they would have died in Ireland or migrated illegally. Of the millions of Irish immigrants who arrived in the United States during the 19th century, 95 percent would be denied legal entry based upon today’s laws.

Today individuals wait years, sometimes decades, in the legal process to join family members. For those fleeing violence, persecution, and poverty, there are no good options. Everyone agrees the current system is broken, yet political will to create a just system continues to elude the nation. As Christians, we are called to distinguish between what is legal and what is just, to challenge unjust laws, and to prioritize dignity over order.