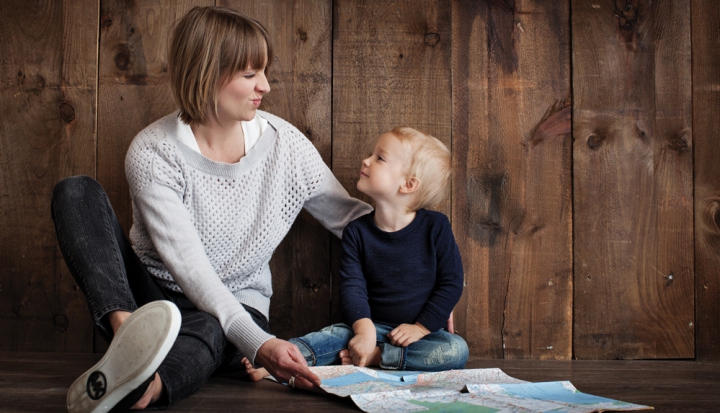 When Katie and Kevin’s son Matthew was 2, Katie was concerned that he was getting lost in between his older brother Bennett and his baby sister Annabelle. “He was a huge challenge. I couldn’t seem to connect with him the way I did with Bennett. He was so impulsive and emotional,” Katie says. She feared that Matthew’s difficulty could lead to a relationship fraught with issues. She decided that the way to steer him to a more attached and positive relationship was through time set aside just for him. “He craved control, and so for a year, when Annabelle would nap in the morning, I would set aside my phone, the dishes, anything I wanted or needed to do and just play everything he wanted. I gave him undivided attention and control over what we did,” she says.

Now Matthew is 4, and Katie says the time she put in between ages 2 and 3 has paid off. “Our relationship has definitely benefited. He is a great listener and is sweet and kind. He seems more stable, emotionally.”

From toddlerhood through the teen and young adult years, parents can often spot a behavior or habit in a child that, left unchecked, could develop into a more significant issue. Sometimes a concerning behavior can be a phase that a child will grow out of without help. Other times steering a child in a more positive direction requires strategy. Katie’s move to bring her son closer and to be more intentional about spending time with him is a strategy that can work well for children of every age group.

Children in families that eat a meal together five or more days per week have higher grades and fewer emotional or mental health issues than their peers who eat separately from their parents. Eating together without the TV or devices allows families to reconnect. Research shows meals together have a protective effect, and teens in families with regular meals together have lower rates of drug and alcohol abuse and teen pregnancy. “Even when our son has a late sports practice and misses the regular family dinner, I sit down with him and keep him company while he eats,” says Denise, mother of three.

“I’ve seen a correlation between my daughter’s angry outbursts and times when the family schedule is too hectic and we are eating too much fast food,” says Dave, father of two. “My wife and I are doing our best to hold onto the family dinner. We also think prayer time before dinner is key. We notice that when we’re not all around the table together, we don’t pray before the meal. Grace before the meal is a daily reset of what is important.”

Check on the sleep

Bedtime can be a struggle, and the proclivity of screens around the house make it more difficult to get kids to bed. Research shows that children who don’t get enough sleep are at risk for higher blood pressure, depression, and mood swings. If a child is sleep deprived, he or she will rebuff parents’ efforts to connect. “When our 11-year-old’s mood changed from being agreeable to downright mean, we discovered he was on his phone until late into the night,” says Jo, mother of three. “When we started putting the phone to ‘bed’ at 8 p.m., he actually went to sleep at his 9 o’clock bedtime, and we had our son back again.”

When Anne Marie and Larry adopted two boys from Ethiopia, they understood some of the challenges their boys would have and tried to be proactive. “I would give Lincoln foot rubs when he was about 10 or 11,” Anne Marie says. “This wasn’t something I would normally do with our biological children, but I knew it brought about some connection and attachment that he needed.”

When Maddie, 7, was struggling with reading in first grade, her mom, Beth, was concerned her daughter was going to see reading practice as a punishment. “I took the reading away from the dining room table,” Beth says. “Instead, each evening after dinner, Maddie and I would snuggle in my bed and read her book there. It turned our practice time into a warm, loving experience.”

When Molly’s daughter, Hannah, was young, she was fearful of any new situation. “I had to make a conscious effort to nudge her to do almost everything, as she preferred to stay on my hip. Sometimes she wouldn’t even be with her dad.” Molly had to take a different parenting strategy with her youngest daughter than she had with her two older and more outgoing children. “She could usually manage situations if I helped her make a plan. Progress was slow but we nudged her to do things she absolutely did not want to do because we could see that once she got over that initial fear, she was fine,” she says.

Eventually, as Hannah got older, Molly was able to set expectations for trying a new activity. As Hannah experienced success, her timidity faded. “She’s now a college freshman, and while she is still quiet, she has a confidence I would have never thought possible.”

Jake, a father of two, did not take the same course as Molly and regrets it. “Our son was fearful of new things when he was young, and we didn’t push him to do anything he didn’t want to. He preferred video games to interacting with people, and we allowed it. By high school we tried to encourage him to join school clubs and activities, but it felt like we missed our window of opportunity. Now he struggles with depression. If I could give advice to my younger self, it would be to assist my son to become comfortable with his discomfort and try new things.”

A smart parent knows when he or she might be out of his or her league in terms of helping a child. While many challenges can be managed through healthy family time, conversations, and positive interaction, some difficulties are best approached with the help of a trained professional. “We had to put our daughter in rehab when we realized that her problem with alcohol went beyond teenage experimentation,” says Shannon. “Some of our friends thought we were overreacting, but they did not know the full story of the lengths our daughter was going to drink.”

Shannon’s daughter went through the program and now, five years later, Shannon believes her daughter would not be alive had she and her husband not sought help. “We now see that even as a child, our daughter probably struggled with some mental health challenges,” Shannon says. “We know we cannot prevent every problem, but we are committed to accompanying her on her journey and helping as we can.”