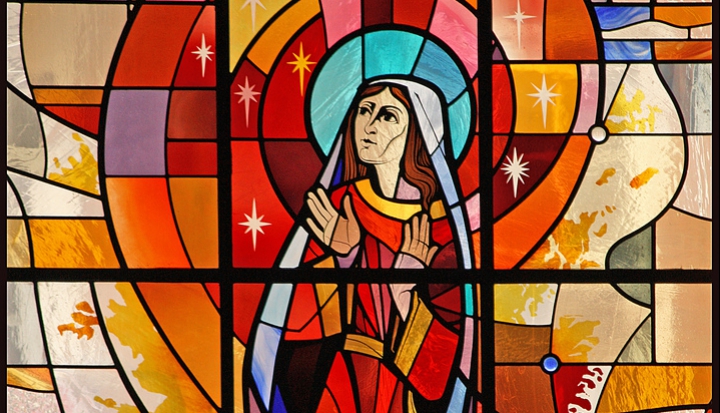 Scholars of early Christianity are in agreement that interest in the mother of Jesus was mostly initiated by the need to clarify the church’s teachings about the nature of Christ, his relationship with God, and the salvation Christ accomplished. Through Mary the fullness of Christ’s genuine humanity was guaranteed, in opposition to those who argued that Jesus only appeared to be human.

As christology continued to develop, new insights were drawn from St. Paul’s understanding of Christ as the New Adam who completes and perfects creation (1 Cor. 15). A natural correlation was seen between Jesus and Mary, with the latter being understood as the New Eve by second-century theologians like St. Justin Martyr and St. Irenaeus of Lyons. While some early teachers understood Mary as less than perfect, even arguing that she could be ambitious and doubtful, others argued for her sanctification or consecration to God even prior to her birth. Similar ideas abounded for St. John the Baptist, whose conception was celebrated as a feast even before that of Mary.

Doctrinal development in the West, supported by pious fervor, eventually led to Mary’s conception being promulgated as “immaculate” by Pope Pius IX in 1854. The intention was to signify that she had been preserved from all stain of sin (the Latin word for stain being macula) by a unique and singular act of God, based upon the redemptive merits of Christ’s future. In the Roman Catholic Church, the liturgical feast of Mary’s conception, celebrated on December 8th, became the celebration of her “immaculate conception.” Mary is considered sinless in the Orthodox Church as well, though her conception is not described as immaculate because of Eastern hesitancy concerning Western ideas about original sin.

The belief in Mary’s assumption into heaven probably evolved from the tendency in early Christianity to describe her life in ways similar to that of her son. By the fifth century the end of her life was celebrated in various places in a feast of her dormition, or “falling asleep.” In an interesting parallel to Jesus, Thomas the apostle doubts her passing until seeing her empty tomb, from which she has been assumed into glory. Eastern Christans tend to think of her assumption as occurring after her passing, while Western Christians usually understand her passing and assumption as a unified reality.

In 1950 the dogma of the Assumption was declared by Pope Pius XII as a singular gift to Mary and as an anticipation of the general resurrection of believers. Perhaps it is best understood as a dogma of hope extended to all Christians who strive to be faithful to Christ and who embrace his resurrection as their own. The final chapter of Lumen Gentium describes Mary as the most faithful disciple of Jesus. By extension, her fate represents our own longing for life without end.