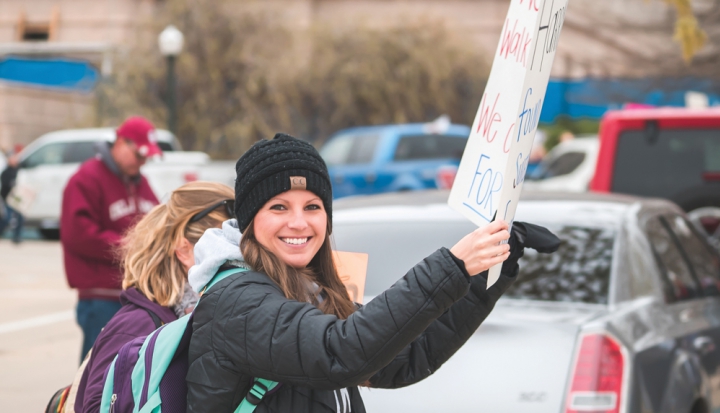 In walkouts on April 2 that shut down scores of schools, teachers in Oklahoma and Kentucky protested for better pay and increased school funding, adding to a do-it-yourself labor revival sweeping across the South like “wildfire,” as one teacher told the New York Times. West Virginia teachers provided the spark to that fire with a nine-day wildcat strike in February that ended with a 5 percent pay hike and restored health benefits.

Since then the foot soldiers in this teachers’ crusade have only grown more ambitious. Now teachers are seeking as much as a 20 percent spike in wages, fed up with annual earnings that have defined the bottom of the national salary scale for years.

Organized spontaneously by the teachers themselves over social media, the teachers’ movement has caught both statehouses and union leaders off guard. The uprising is making some union chiefs uneasy. They don’t know how to respond to the sudden aspirational spike among their membership and fear a devastating retaliation from legislators and governors. Despite those concerns the teachers’ revolt has been an invigorating spectacle for what has become a timid U.S. labor movement. It is surely inspiring for the teachers of the South themselves, long resigned to poor salaries, benefits, and working conditions; beaten down by anti-labor state legislators and poorly served by enfeebled unions.

Red state educators have been notoriously underpaid for years, and conditions in many southern and western states have only gotten worse since the Great Recession in 2008. In Arizona, another state facing a significant teacher uprising in April, state spending on K-12 education has declined 37 percent since 2008, according to analysis by the Center on Budget and Policy Priorities. Oklahoma teachers have not had a raise in a decade, and tax cuts there have resulted in a 28 percent reduction in state general funding for education.

Jumbling multiple jobs to make ends meet at home while digging into their own pockets for school supplies to do the same in the classroom, many teachers have come to the conclusion that they have little to lose by joining the wildcat actions. But will better salaries for teachers mean better educations for schoolchildren in the South?

Teacher quality is the most important determinant of students’ future success, so recruiting and retaining high-quality teachers are essential to student achievement. Beyond attaining just and living wages, the teachers’ demonstrations bring a focus on the low priority for public education in many red states. That could mean more overall state funding for local schools.

Catholic schools are most often depicted not as potential assets to public education but as adversaries competing for resources with struggling public schools. That zero-sum paradigm is a detriment to both sides of the school choice debate.

State constitutional and bureaucratic barriers to public funding for Catholic schools are significant, but adding Catholic schools to the mix of strategies that might right listing public school systems opens up a number of creative options for education reform. That will be especially important in districts where falling property values and incomes restrict new revenue flows into public education.

Catholic schools have to get their houses in order first. According to the Bureau of Labor Statistics, in 2017 at about $45,200 a year average, Oklahoma public school teachers were the third lowest paid in the nation—significantly below the $59,000 national average. They still earned about $4,000 more than Oklahoma’s other private school teachers. Catholic schools may be facing their own walkouts before this teachers’ crusade ends.