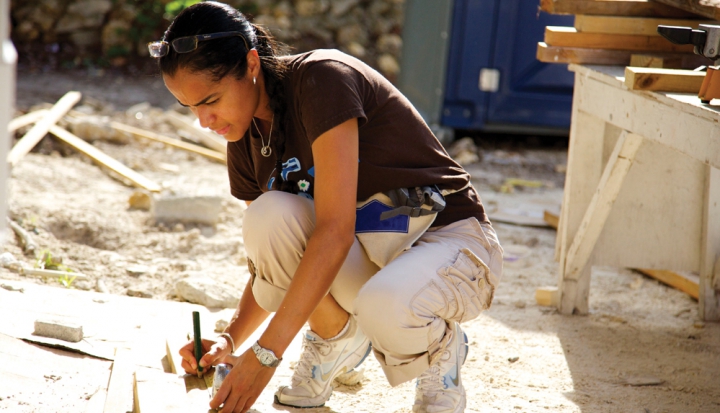 The official tagline of the Jesuit Volunteer Corps is “Dare to Change.” The unofficial motto, used by those who have completed a year or two of service with the organization is “Ruined for Life.”

The Jesuit Volunteer Corps (JVC) is the largest lay Catholic full-time volunteer program in the world and has been a pioneer in the service landscape for about 60 years. More than 10,000 men and women—mostly new college graduates—have served within hundreds of communities worldwide. Jesuit Volunteers work full-time in both Catholic and secular organizations focused on social justice and service to the poor and vulnerable. They live in a community with other young adults, exploring their faith through a framework of Catholic, Ignatian values. JVC provides housing, insurance, food, a small stipend, and regular retreats.

Our oldest son, Jacob, chose JVC after graduating from college last May. He lives in Atlanta with his community of five other Jesuit Volunteers and works as a case manager with the International Rescue Committee, a global nonprofit assisting refugees in navigating U.S. social service systems.

Because I spent a year in service after college with an organization similar to JVC, I understand what former JVs mean when they say they’ve been “ruined for life.” Spending a year not only working with the poor but also living with others committed to examining social problems through the lens of the gospel changed me as a young adult. The immersion experience of that year of service tilted my heart and mind toward those at the margins. It affected the way Bill and I have approached our marriage; it informed our decisions regarding fostering and adopting children; it eventually led to my career in corporate social responsibility. The other adults I know—now in their 40s—who gave a year of service after college have similar trajectories. My friend Andrea, who was part of the Catholic National Evangelization Team (NET), is a social worker focused on serving children in foster care. Lisa Marie, also a NET veteran, works as a hospice social worker. Lisa Marie’s husband, Dan, an attorney who did two years of JVC, now leads the nonprofit Disability Rights Wisconsin. Amy, who served with me at Chicago’s Amate House, is a partner in a law firm where she brings in more pro-bono work than all the other attorneys combined.

Christina, a volunteer in my son’s community, articulates well the changes that take place within a volunteer. She teaches English as a second language with Catholic Charities and has found that JVC has propelled her to recognize both her own privilege and the lack of diversity she encountered in her day-to-day life before becoming a Jesuit Volunteer.

“I attended private high school and college, went on family vacations every summer, and continue to have my cell phone bill and insurance paid for by my parents,” she says. “Along with these privileges, my life experience has been overwhelmingly white. As crazy as this sounds, I can confidently say that in the past six months I’ve spent in Atlanta, I have had more interactions with people of color than I have had throughout my 24 years.”

Christina’s experience is causing her to reframe some of her thoughts on race and socioeconomic status.

“Until I lived in Atlanta, I had never known what it felt like to be the only white person in a room, a feeling the black students in my high school probably felt every day,” she says. “Before my year with JVC, I also had never truly budgeted my spending—and even the limited budget my housemates and I are provided with is more than what people who live at or under the poverty level have. You could be an extremely educated person with endless knowledge about institutionalized racism and poverty, but until you live among people who actually experience these things daily, that knowledge means very little.”

Volunteers are “ruined for life” in that at the moment when they are just learning how to be adults, they are presented with the responsibility that comes with being a Christian. And being a Christian, if you do it right, isn’t comfortable.

For us, going to work meant living out the 25th chapter of Matthew—we went to our places of employment, and often our job was to make sure people were fed, clothed, welcomed as strangers, and visited while ill or in prison. As we defined ourselves as adults, we were given the instruction to find a “mission worthy of our lives.” We felt no pressure to find a job of high status, to secure a career that would allow us a big house, designer clothes, and expensive cars. Instead, we had the opposite pressure. What would we do to bring about the kingdom of God? We were told to be careful not to let the temptation of money and status get in the way of the preferential option for the poor. We were instructed to wade into the muck of life where nothing is clear and the real work needs to be done. “Come on in, the muck is fine,” says one of our leaders, who worked with youth in the Chicago housing projects.

And now Jacob is in the middle of his year of service. He’s in the muck. One of his recent clients was a man who was one of the 40,000 orphaned during the second Sudanese civil war in the late ’90s. A lost boy of Sudan, he is now a lost man, struggling with disease and poverty. Jacob called us shortly after meeting with him, having found for him a few resources, a bit of food, and some bus tickets, but knowing he was unable to lift the man to any measurable degree. I listened to Jacob’s story, unable to find words to give Jacob hope that maybe the man would indeed be just fine. Part of working in service is entering into Mother Teresa’s wisdom: “God does not require that we be successful, only that we be faithful.” As a mom, I wanted Jacob to feel that his work and faith could change even the most dire situations. As a fellow Christian, I knew Jacob had to learn that a part of service was simply the act of walking into the muck to be with another person.

I am so thankful.