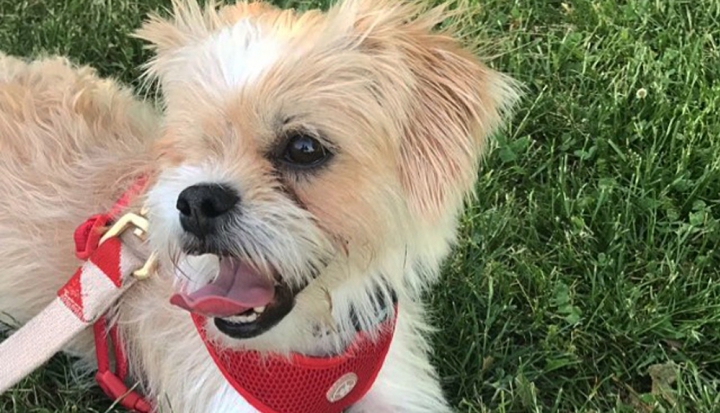 Once a week I take out the trash. It’s a bit of a journey, carrying the overstuffed bag down two flights of stairs, out a door, through a gate, and around the corner to the dumpsters lined along the side of my apartment complex. When I return to my unit approximately three to five minutes later, I am greeted by my dog. He is a tiny thing, just 12 pounds, all fluff and missing his right eye. And he is so excited to see me.

You would think I had been gone all day the way he runs around from the bed to the armchair in the corner, jumping up to lick my hand—quite a feat for such a small dog! His tail wags in a steady circle, his ears are pinned back in excitement, and as soon as I see him I can’t help but smile.

It’s like this every day, whether I’ve been gone for 10 hours at work or two minutes to the mailbox—Jack has the excitement of a child on Christmas when I walk through that door. And the thing is, he treats everything like that. We walk the same routes morning, evening, and night, and it’s all new to him. The dog that lives next door and sticks her nose out from under the fence is just as fresh and interesting as she was the day before. The old woman who lives in the large house a block over is just as fun to sniff and play with. (It helps that she’s as overjoyed to see him as he is to see her.) No matter the routine, every day is a fresh start for Jack.

Wouldn’t it be wonderful if we could all live our lives this way? If we could wake up and forget about the troubles from the day before—or even just simply let them go and learn from our mistakes? (Much in the way my dog recognizes Sadie, the large mastiff who stepped on him accidentally. He wags his tail and gives her a sniff but remembers to keep a distance in the event such an accident happens again.)

Some might argue with this logic. Of course we can’t do that. Dogs are not human. They don’t have the same problems and never face the hardships we do. They get to lie around and sleep all day. But dogs do experience significant challenges in their little doggy days, and many dogs encounter atrocities that most of us will never face.

Take Jack, for example. My tiny mutt was found wandering the streets of Chicago’s South Side, one eye so heavily injured (I will save you the gory details) the vets at the shelter had no choice but to remove it. It’s unclear how long the poor pup was alone out there, but when I first laid eyes on him at the shelter, his fur was long and matted, a telltale sign of neglect or of many weeks on the streets.

Before I got Jack I was suffering from post-grad anxiety and depression and struggling to adjust to living alone for the first time. Most of my friends from college had moved on and away, and I was lost without them. There would be days I would lay in my bed and just cry, completely overcome with fear for the future and an inability to face my present and let go of my past.

A therapist recommended getting a dog. A lifelong animal lover, I followed her advice and a few weeks later had found Jack and completely fallen in love with him.

Sometimes when I’m watching him sleep next to me or run around the apartment, I wonder where I would be without him. Would I be as happy as I am now? Would I have gotten my life (relatively) together?

To be honest, I doubt it. In the last six months of having Jack in my life I have learned so much more about the simple spirituality of letting go than I ever have before. It takes a strong individual to be able to recognize that the wheel of life keeps spinning and that we must continue to spin with it, letting go of what has ailed us in order to look forward to the coming tomorrow. And that is exactly what I see my tiny dog do every single day.

Because of his one eye, Jack sometimes misses the bed when he jumps on it, judging the distance poorly due to wonky depth perception. When this happens he simply backs up and tries again. The same happens when he loses track of a toy I’ve thrown for him; he relentlessly searches for it until he finds it, unembarrassed by his error.

It is in these moments that I learn from the little guy. I’ve messed up at work before, as most people have. I have forgotten deadlines or lost track of papers. Once or twice I have dropped the ball in a major way, losing track of a task the same way Jack loses track of a toy. Unlike my dog, though, I have agonized over my missteps, stayed awake all night recounting the things I have done wrong and the ways I could have made it right.

Instead of torturing myself, I really should have taken a cue from Jack and simply let go, trusting that God would have my back and help me right my wrongs the next day.

In a way, the ability to let go and accept and try again is a meditation. It’s cyclical. Our entire lives we will make mistakes and have tragedies occur; we will encounter road blocks and obstacles that require us to try again. There is no point to the process of life if we relentlessly hold on to the things that will undoubtedly hold us back.

In a society plagued by anxiety, I think we can all learn a little something from a dog in our lives. Pay attention to their joy over the small things, recognize their triumphant acceptance of each day and moment as its own new beginning and take note. Wake up excited to simply be alive, rejoice in each meal you sit down to eat, allow yourself to be overwhelmed by the joy of seeing a loved one—even if you saw them only yesterday. With the grace of the spirit of God, we should be compelled to start each day anew in the way Jack does, with fresh eyes and hearts full of love.