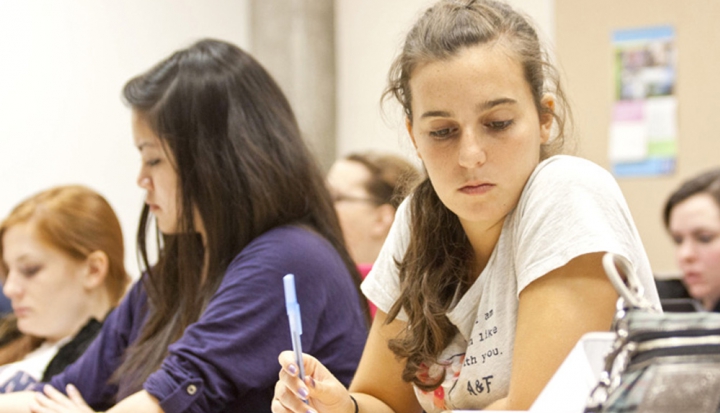 A few weeks ago I was standing in the back of a college classroom at the Catholic university where I teach while my students chatted with a guest speaker via Skype. The guest speaker was a deacon on his way to the priesthood and a graduate of the University of Saint Francis, where I teach. In the shadowy back aisle where I stood, I listened while Deacon Jay explained that he was not Catholic during his first three years at Saint Francis, but felt pulled toward the faith after a chance invite from a couple of girls to join them at Mass.

As a professor I am always thinking about my students’ experiences inside the classroom, but less about their day-to-day life outside of it. As Deacon Jay continued to tell the story of his unexpected calling to the priesthood, I started to think about his first moment of introduction and wondered how many of those invitations are offered on campus. Am I, for example, part of that invitation? Am I allowed to be that invitation?

I understand how that might sound like a ridiculous question. Of course I can be fully Catholic at the University of Saint Francis. And yet often in the classroom I lean hard into an ecumenical stance so as not to disenfranchise students who do not come from a Catholic tradition.

But here was Deacon Jay talking about how he came to the school as a non-Catholic student and, because of an invite from fellow students, the course of his life was dramatically altered. In the muted light of the classroom I asked our speaker and the students in the room what their experience of Catholicism was on our campus. When at first no one answered, I prompted them by asking, “Is it too Catholic? Not Catholic enough?”

It took a while for the question to stir inside them, but judging from the continued references to it, it is clear the question is still stirring. First some students responded, “Yes, it’s Catholic enough,” referring to daily Mass on campus and the campus ministry that does a good job of offering Catholic events to engage students’ faith lives.

My non-Catholic students responded hesitantly. “It’s too Catholic here,” one said. “The professors assume we know what they’re talking about and we don’t,” another said, specifically in reference to a course on the rosary. Despite this, most of my students passively accepted how the university’s Catholic tradition trickled into their studies. “I knew it was Catholic when I came here, so I’m fine with the things we have to do that are part of the school’s Catholic identity,” another student said.

One student, however, said she didn’t know the university was Catholic when she applied and wrote in a recent response paper that she is “sick of having Catholicism shoved down my throat.”

The “shoved down my throat” phrasing didn’t sit well with me because of my overzealous tendency to accommodate diverse faith backgrounds in the classroom. I’m certainly not shoving anything down anyone’s throat. But after talking with Deacon Jay, I started to wonder what opportunities for dialogue I was throwing away.

It comes down to an unspoken default position of the college professor, one my mother and I have been debating for the past 20 years. She firmly believes universities are liberal hotbeds where progressive professors push their agendas. As someone who has been studying and teaching in the university system for more than 20 years, I take an opposite view. For starters, if professors were as influential as she believes us to be, we’d be more successful at getting students to read assigned material.

But more to the point, with a few exceptions there are only a handful of teachers whose personal beliefs I could identify after years of being their student. It is largely the default position for professors to withhold personal convictions to encourage open discourse in the classroom. I’ve generally accepted that default position.

From the back of that classroom, I listened to Deacon Jay and wondered if I was using my professorial energies in a way that encourages anything remotely similar to the sort of transformation that began in him after a simple invite to Mass. And, if not, what exactly is it I’m doing? I might bore students who find religious dialogue in the classroom tedious and disengaging, but I might also be doing exactly what an educator is called to do—opening up ideas that enrich students’ lives.

Catholicism fosters dialogue really well. It is graceful in its approach to the big questions. And it has enough room for every kind of person from every walk of life. Instead of withholding my faith, I serve my students better by leading with it and inviting the dialogue that comes from that openness, especially the “shoved down my throat” dialogue. If I’m not doing that, if I’m not actively serving as an invitation into the biggest world my students can encounter, I might as well step out of the classroom altogether.

TagsEducation In and of the World