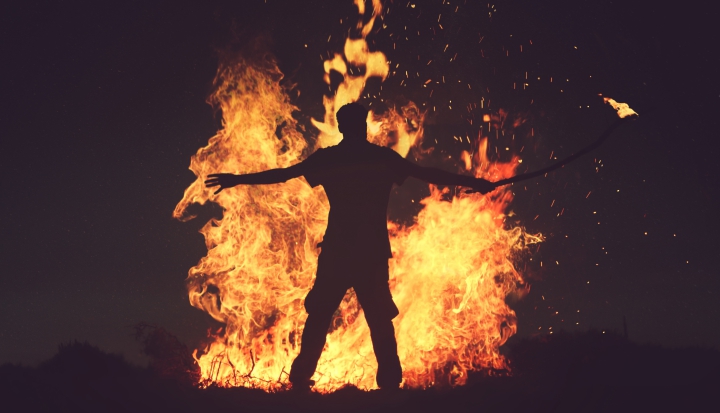 It’s one of those Bible stories that, from my childhood, has captivated me: three men, true believers, refuse to worship a golden idol and are thrown into a furnace by an evil king. But God saves them. The flames are so intense that the king’s henchmen are burned up, but Shadrach, Meshach, and Abednego don’t even break into a sweat.

And then, of course, there are the songs that make it richer still.

One is from the story itself, as presented in the Book of Daniel. It’s the psalm of praise that the three men sing in the midst of the flames. There is a dignity to the son, a solemnity, a balance, so at odds with the horrific setting. These men are being burned alive—at least, that’s what the king expects. Instead, they’re singing:

That’s how their song begins in a recent translation by the International Commission on English in the Liturgy. As it goes on, the three men call on the rainstorm and dew to praise God, frost and sleet, birds of the air, rivers, and seas—even fire and heat.

The song is a panorama of creation. Each element of existence, each aspect of life, is called forth to raise its voice in praise of God. And then humanity itself:

Those are the real names of Shadrach, Meshach, and Abednego, the names the three men had back in Israel before they and their people were marched away into captivity by the Babylonian King Nebuchadnezzar and given new identities as slaves. It is not insignificant that their song ends with them honoring the Lord in their real names—from their heart of hearts.

This is a fine point—especially for a child hearing about Shadrach, Meshach, and Abednego for the first time, And I have to admit that it was another song that made the story come alive for me back when I was young.

In beat, tone, and language, it was completely different from the paean in the Bible. Where the canticle of the furnace was unrushed and deeply earnest, this other song—“Shadrach,” written in 1931 by Robert MacGimsey and rooted in the tradition of African American spirituals—was playful and rollicking. Yet both used a repeated phrase to create a call-and-response rhythm, and both were filled with wonder at the power and love of God. IN its own way, “Shadrach” was every bit as earnest as the song in Daniel:

Part of the fun of MacGimsey’s song is that it’s built around three such unlikely words: Shadrach, Meshach, and Abednego. (Another song from that era, also seemingly written on a dare, had the refrain of “Atchison, Topeka, and the Santa Fe.”) Even more, the delight rises out of the song’s childlike joy. The Lord protected Shadrach, Meshach, and Abednego, pure and simple. It’s a fact beyond questioning, a fact to celebrate, to revel in.

Both songs are humns of joy. Both are rooted in a simplicity of belief—in deep trust, the trust a toddler shows when she falls asleep on her father’s shoulder. That’s what makes the story of Shadrach, Meshach, and Abednego so alluring to children.

Yet there is something about that unalloyed faith that’s unsettling to me as an adult. Can it be so simple?

Sure, God took care of Shadrach, Meshach, and Abednego, protecting them from the flames and even sending to them, in the heart of the furnace, “a coolness such as wind and dew will bring.” But that isn’t how it works in real life.

Real life isn’t painless. It’s filled with friction and sweat and tears. This is how we learn, how we grow. Think of all the work a baby must do, all the trying and falling, the stumbling and stuttering, all the nicks and bruises that come with learning to walk, talk, and be with other people. Really, that struggle never stops, even as an adult—especially as an adult. Unless you crawl into a shell, you’re constantly wrestling with life. God calls us to live life with all its complexities and ambiguities, its mix of triumph, tedium, and tragedy.

In fact, its real message is the exact opposite.

“True peace,” the Rev. Martin Luther King Jr. said, “is not merely the absence of tension, but it is the presence of justice.”

King made the comment during an address at a convention of the National Association for the Advancement of Colored People (NAACP) in Atlanta in 1962, at a time when racial tensions were high in the United States, in large part because of the efforts of King and his allies.

There were tensions, too, within the civil rights movement itself, as evidenced by the decision of the NAACP leadership to relegate King’s speech to an off night at the convention. For years, the NAACP had been working quietly—and with modest success—to win recognition for American blacks as full citizens before the law. But, suddenly in the mid-1950s, King had emerged as the leader of an entirely new and less patient thrust for racial justice. Rather than work to coax concessions from the courts by clever use of the law, King and his followers went out of their way to break discriminatory laws and face the legal consequences in order to publicize their patent injustices—hoping that, powerless themselves, they could cause those laws to be changed through the might of moral suasion.

King addressed these tensions early in his remarks, warning his allies not to denigrate the NAACP’s legal efforts but also arguing, “Only when the people themselves begin to act are rights on paper given lifeblood.” The solution, he said, was to use nonviolent protest to win over that vast majority of people who wanted to do the right thing if only they could see the way.

“This is the beauty of nonviolence,” he said. “It says you can struggle without hating. You can fight war without violence. This is where we find the essence of love, standing at the center of this movement.”

The essence of love—what could that be? Well, it involves self-respect, to begin with. A respect for yourself so deep that you can’t help but respect your enemy. In fact, the term enemy ceases to have meaning. You see those who are lined up against you, who hem you in and keep you down and chain you up, not as demons, but as human beings like yourself, as capable as you are of making right choices—if only given a moral nudge, by your example.

This is dangerous talk for anyone at any time in history, and particularly for U.S. black citizens in the early 1960s. No one could be sure then how strong moral suasion would be, how many hearts it could change. And how many hearts it wouldn’t touch. Less than six years after speaking that night in Atlanta, King himself was gunned down on a Memphis motel balcony.

But the danger and struggle and tension—the risks—were at the heart of the peace that King was proclaiming.

“I submit to you,” King said, “that any individual who decides to break a law that conscience tells him is unjust and willingly accepts the penalty for it is at that moment expressing the very highest respect for the law.

“There is nothing new about this. Go back with me if you will to the Old Testament. See Shadrach, Meshach, and Abednego as they stand before King Nebuchadnezzar. They made it clear: ‘We cannot bow.’ ”

When they went into the furnace, Shadrach, Meshach, and Abednego fully expected to go up in flames. It is their acceptance of the furnace—their refusal of the king’s command to worship the gold statue—that is the core of their story: “We cannot bow.”

Rather than take the safe course (arguing to themselves that they could do more good as live activists than as dead rebels), the three took the plunge. They put their faith in God and dove into the blaze.

And God’s response: It wasn’t so much that God saved their lives. After coming out of the furnace, Shadrach, Meshach, and Abednego had to go off and live the rest of their years, and, amid the usual joys of human existence, they had to grapple with the usual challenges, problems, and burdens. They still had to make choices between good and bad, between right and wrong. They had to grope in the dark to find their way, to make hard choices. And then, in the end, they died.

So, really, God didn’t save their lives.

What God did in sending an angel to cool and protect Shadrach, Meshach, and Abednego was to celebrate their right choice, their decision to remain faithful to themselves and to their faith. In the heart of the flames, God threw a party.

This is why, at the end of the furnace song, the three men refer to themselves by their old names—by their real names. In choosing the furnace over the idol, they chose God over Nebuchadnezzar. They chose their covenant with God, their people’s covenant with God. They chose right instead of wrong. Like any choice, it was a risk. They were willing to gamble on God.

In choosing to fight injustice, King didn’t avoid risk. In choosing to respect those against him, he didn’t sidestep danger. He could have lived a quiet, stay-at-home life as he moved up the ladder of black Baptist congregations in the segregated South. He could have crawled in to a shell and peeked out only to remind himself how lucky he was to be apart from the struggles going on around him.

Like Shadrach, Meshach, and Abednego, he said, “I cannot bow.” They refused to accept Nebuchadnezzar’s vision of a world in which his was the final word. King rejected the then-prevalent American belief that the races, black and white, were essentially separate and incompatible, that, at heart, they had nothing really in common.

Shadrach, Meshach, and Abednego saw themselves as partners with Nebuchadnezzar and the ret of humanity in the adventure of life, a saga in which everyone is interwoven with everyone else—and with God. In the real world—the world of God, the world of faith—there were no slaves, no rulers, no rich, no poor, no winners, no losers. A golden statue was as mundane as a new-made brick, as lifeless, as mute.

It was Nebuchadnezzar who was misguided, not the trio of slaves who refused to follow his order. It was Nebuchadnezzar who, even though he didn’t realize it, was fooling himself to think he was in charge, in control. For Shadrach, Meshach, and Abednego, to bow down to the golden idol would have been to buy into Nebuchadnezzar’s blindness, to close their eyes to the real world, to real life.

Similarly, King saw himself as a partner with all Americans—blacks and whites, Jews and gentiles, Protestants and Catholics—in pursuit of true freedom, true peace, true justice. His vision was not of two sides but of one people, together, under God. It was his faith. It was his dream.

MacGimsey’s song ends with a similar dream—a giant party, “a big time,” in which the house of Israel and the house of Babylon celebrate as one. In its joy and exuberance, it captures the payoff of being true to yourself and to your God:

This article was originally published in the November 1997 issues of U.S. Catholic.

Photo by Mohamed Nohassi on Unsplash

Patrick T. Reardon is the urban affairs writer for the Chicago Tribune. 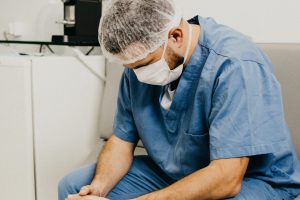 During crisis, prayer leads to peace 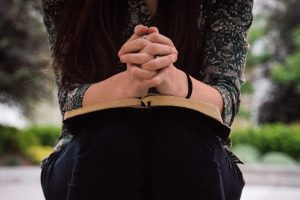 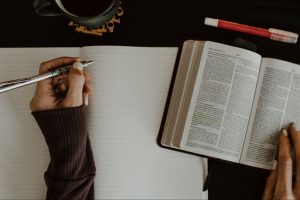