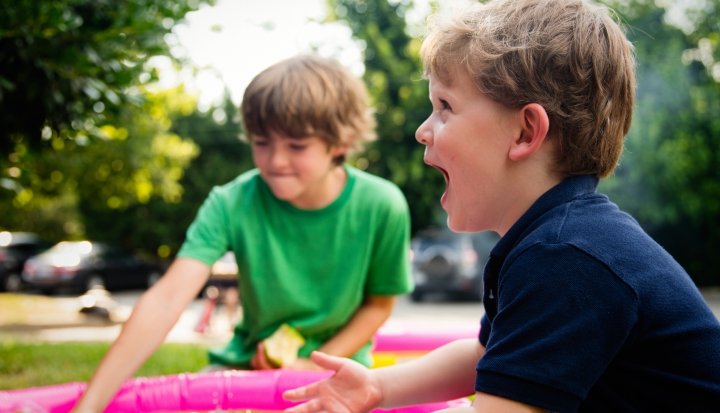 Thwack. The kickball ricochets off the front of our house and the arguing begins. “Safe!” yells Henry. “Run to second!” yells Thomas. “I got you out!” yells Nate. “You’re all cheaters!” yells my son. Each declaration ratchets up to earsplitting levels. I watch from the window as they abandon the kickball and start to circle each other like lions weeding out the weak. By the time I finally throw open the door to intervene their passions are running so high and their fits of opinion are so strong only dogs can understand their shrieks. Just as two of the boys lock arms in a fight that quickly results in red scratches on both of their necks, I fling the screen door open and start my own shouting.

They all freeze like animals caught in headlights before returning to a wild cacophony of argument and demands. After a brief attempt at translating the language of wild boys, I tell them, “No, that rule’s dumb. Nate, Atticus, hands off each other. Thomas, off Henry. If you can’t act like friends, everyone’s going home.”

After my intrusion they all storm off in separate directions loudly disavowing each other with comments about each other’s lack of sporting prowess and aggressively announcing they never want to play with each other again. A half hour later they can all be found in a pile of wrestling limbs on the front of the yard again, yelling, laughing, and one-upping each other’s poop jokes.

All I can do is shake my head. I just don’t get 8-year-old boys. I was a certifiable, rough-and-tumble girl, but an 8-year-old boy is another thing altogether. The way they interact is so aggressive. The games they play are so full of violence. How do I tame my son, part child and part beast, and bring him to love God and peace and kindness when he would, in his own words, “really like to punch somebody in the face”?

During an interview with David Letterman, Matt Damon, father of four girls, addressed the difference between parenting girls and parenting boys. “I sit there and play princesses with my daughter and I never told her anything about a princess ever. Whereas I go to my brother’s house and he’s got two boys. I walk in the front door and I instantly get punched in the nuts,” Damon says. “We’ll call each other and he’ll say, ‘Hey, what are you doing?’ I’ll say, ‘I’m playing princesses, man, what are you doing?’ He’s like, ‘I’m in the emergency room again.’ They know him there.”

When my son hears about Damon getting punched in the nuts, he can’t stop laughing because 8-year-old boys are physical creatures who enjoy violence. They like to hit and find questionable ways to test themselves, like, say, dare each other to climb trees that are too high or see how many punches in the arm the other can endure.

According to Julie Gillis at the Good Men Project, “Fighting and rough-and-tumble play are good for boys. In fact, it will . . . make them more empathetic, more trusting, and more able to understand physical boundaries.” Gillis refers to the work of Dr. Stuart Brown at the National Institute of Play when she argues that “ ‘play’ fighting actually teaches their brains how to know the lines between real hurting and not” and that “what appears violent and upsetting to adults (in an increasingly violent world) actually helps them build skills to keep them from behaving that way as adults.”

A discussion on the PBS Parents website corroborates Brown’s work: “Competition, power, and success are the true stuff of boy’s play.” Boys like to one-up each other. They like to assert dominance, but these acts, rather than being markers of problematic aggression, are natural developmental behaviors for a child who is learning how to handle his emotions and understand his place in the world.

My concerns over what I view as aggressive play do not end with my son and his friends. At least two or three times a week, I find myself biting my tongue while my husband pins down our son in what looks to me like overly dominant play. My son, who is absolutely gleeful during these wrestling sessions, couldn’t disagree with me more. He likes nothing more than to leap from our bed to land the People’s Elbow on his unassuming father who quickly reciprocates with a swift headlock. While these exchanges occasionally end in a real fight over who played too rough, I think it’s safe to say that they both love this kind of play. Me, overly soft mother that I am, cannot stand to watch it.

While it pains me to let the aggressiveness in my son continue, I do want him to grow in to a person who understands and is comfortable with his physical and emotional boundaries. I might let the tussles and acts of straight-up physical violence continue a beat or two before intervening, but not long enough for my son to get that much-longed for punch in on his dad or one of his buddies. Just because he’s part wild animal doesn’t mean I have to let him behave like one all the time.