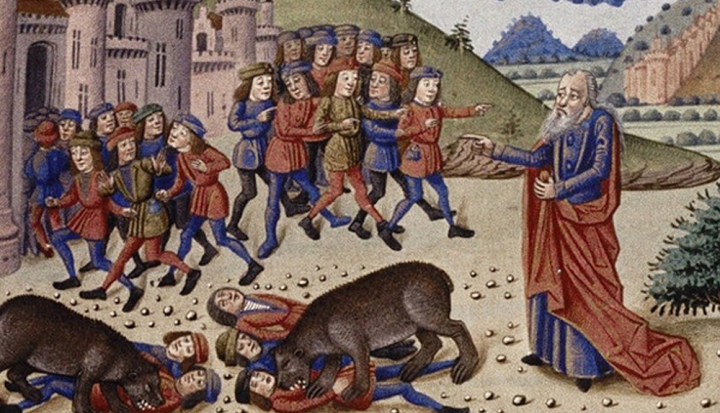 There are some Bible stories that don’t appear in the Lectionary. Like that of Yael, in the book of Judges, who drives a tent peg through an enemy general’s head, killing him instantly. Or that of Uzzah, who reaches out to steady the Tabernacle in 2 Samuel and, as a reward for his consideration, is instantly struck dead by God.

Other stories are told so often it’s easy to forget how violent they are. When Joshua marches seven times around the walls of Jericho, after which they fall and allow the Israelite army to triumphantly enter the city, the next thing that happens is genocide of everyone already living there. Even Jesus, the Prince of Peace, says in Matthew, “I have not come to bring peace, but a sword” (10:34) and talks about the “weeping and gnashing of teeth” that will happen on Judgment Day (13:42).

Walter Brueggemann argues that the depictions of violence weren’t always literal but instead a way for a colonized people to show their rage and sorrow. As in Psalm 21, where the author writes that the Lord shall “swallow [my enemies] up in his wrath, and fire will consume them.”

In other cases, the biblical text decries the very violence it details. Toward the end of the Book of Judges is the story of an unnamed woman who dies after being raped by a group of Benjaminites—one of the 12 tribes of Israel. Her body is cut into 12 pieces and sent to each of the 12 tribes so that all of Israel knows of the crime. The Anchor Bible points out that the story both begins and ends with the words “in those days there was no king in Israel.” The author seems to be saying, “Look at how low the Israelites have stooped. They have abandoned their morals and there is no rule of law.” The book sets up what happens next—in Samuel and Kings, which follow, God institutes the Israelite monarchy.

It is one thing to defend humanity’s violence in the Bible, but it is harder to explain why our God—the same God who tells followers in the New Testament to “turn the other cheek” (Matt. 5:39) and “my peace I give you” (John 14:27)—kills Uzzah or sends bears to maul little boys just for teasing Elisha, God’s prophet (2 Kings 2:23–24). The Bible as we have it today is the combined work of many individuals who sought to interpret and live out God’s word the best they could. Modern readers, millennia removed from these original authors, may never know why God seems to condone violence in the Bible, often against those who seem the least deserving of harm.

There may always be seeming discrepancies between these stories and other scripture passages that tell of the lion laying down with the lamb and the Lord who blesses his people with peace (Psalm 29). God’s will has always been inscrutable. The world has not changed all that much since the days of the Hebrew Bible. At the very least the violence of scripture reminds Christians to never become blind to the violence and discord that still exist but instead to continue struggling to bring about God’s peace. 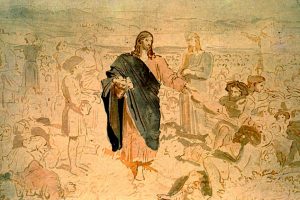