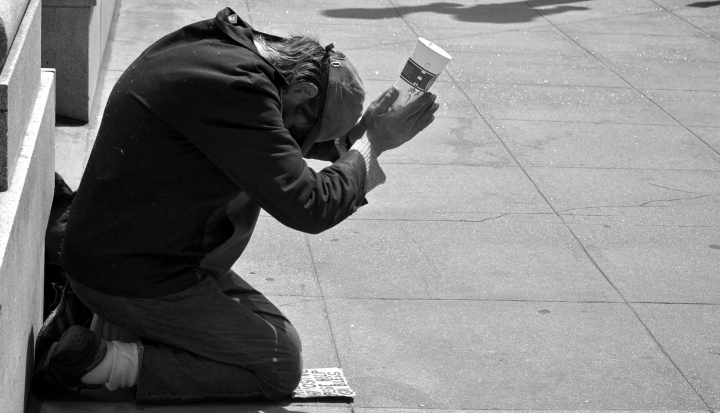 A few months ago an immigrant family, including three children, sat outside my church at the conclusion of the 9 a.m. Mass with a sign begging for money: “Anything helps. God bless.” Parishioners averted their eyes and steered clear of the family as they headed to the parking lot. Nobody stopped to give money. Eventually the ushers literally ushered the family off the property after describing the various agencies and programs available to the family for assistance.

I witnessed this event soon after reading a controversial interview in a Milanese magazine with Pope Francis in which he argued that people should not hesitate to give money directly to the poor. “Help is always right,” said the pope.

Almsgiving, donating money or goods to the poor, is a foundational and non-negotiable Christian obligation. How we give alms, however, is negotiable. Roman Catholics are under no canonical obligation to give a certain amount or percentage of their income, nor are they under any obligation to give in a particular way.

Many Christians prefer organized almsgiving, whereby they give money to a particular organization or charity dedicated to serving a particular need, such as Catholic Relief Services or Catholic Social Services. Individual, or transitory, almsgiving such as the pope is exhorting Christians to practice, is much more controversial. Some of the arguments against transitory almsgiving were laid out by Bishop Thomas J. Tobin of Rhode Island in a Facebook post only a month after the pope’s interview. Bishop Tobin urged Christians not to give money directly to the poor, insisting that such a practice enables a few dishonest “professional” panhandlers and “sustains a very unhealthy and degrading lifestyle.” Bishop Tobin concluded, “Throwing some loose change at a panhandler while passing by is demeaning of his or her human dignity. . . . Our community has legitimate and structured means of helping the poor and needy. We should support those.”

Yet there are important reasons to heed the pope’s call to give money freely to the poor. The most important reason is that giving money directly, if done correctly, makes possible an encounter between the giver and receiver of alms that organized almsgiving does not always allow for. This human encounter is a necessary prerequisite to solidarity, the recognition that we are indeed our brothers’ and sisters’ keepers.

In Pope Francis’ interview, he contended that it is not enough to “throw a few coins at the poor” and insisted that dignifying those in need by “looking at them in the eyes and touching their hands” are the true marks of Christian charity. The pope explained that we should greet those who beg with a “hello” and “how are you?” We should acknowledge their humanity, ask what they need, and serve their deeper yearnings with more than our spare change.

If we only give money to charitable organizations, we run the risk of never entering into real relationships of solidarity with those we are trying to serve. By getting down and looking someone in the eye, starting a conversation, and, yes, granting their request for money or whatever else they might need, we serve the fuller needs of the poor for both material goods and, more important, for human love and care that they might not get at a shelter or food pantry.

This idea is not new to Christians. Jesus says “Give to everyone who begs from you, and do not refuse anyone who wants to borrow from you” (Matt. 5:42). He does not place stipulations on giving based on the worthiness of the recipient or how the money we give will be spent. It is odd, then, that utilitarian calculations so frequently stymie our own generosity. When I talked to fellow parishioners about why they chose not to give money to the immigrant family outside my church, everybody mentioned that they were confident that this family would only squander the funds. This may be true. When I lived in Boston, it was not uncommon to see a beggar on the street smoking cigarettes or drinking malt liquor. It is easy to say, “See, that guy doesn’t even know how to use money responsibly. Why should I give him more?”

This is, however, a hypocritical judgment that fails to acknowledge how often we, the comparatively wealthy, also squander our own funds on luxuries like a carton of cigarettes, a cup of iced coffee, a bottle of wine, a new pair of shoes. Certainly there is a time and place for luxury spending. We are not required to be cold, rational, and utilitarian in every single spending decision. But when we compare how readily we rationalize our own choices and how readily we condemn those of others, it may be time to turn the scrutiny on ourselves. As Pope Francis put it, “If a glass of wine is the only happiness he has in life, that is fine. Instead, ask yourself what you do secretly. What ‘happiness’ do you seek in private?”

Certainly, it is not inappropriate to ask ourselves how we can most effectively serve the needs of the poor and put the bulk of our almsgiving into organizations well-equipped to reach the maximum number of people in need. But when it comes to individual almsgiving, our attitude ought to be one of luxury not utility. The money we give to the poor is likely money we were going to squander ourselves. So we should give freely and generously without worrying how our alms will be spent. As St. Leo the Great wrote, “Fear not to spend, sigh not over the doubtfulness of the gain.” Our primary responsibility is to make sure that we are giving alms, not that those funds are necessarily what we deem well-spent.

Furthermore, direct giving is an exercise in humility, a recognition that poverty continues to exist because of our own inadequate generosity. Though we have a duty to give alms, we are prone to self-deception as to how well we fulfill our duty. Those with household incomes between $100,000 and $200,000 contribute, on average, just 2.6 percent of their adjusted gross income to charity, which includes money given to church. While those with a religious affiliation tend to give slightly more than their secular peers, churchgoers have an inflated sense of how much they give overall. A national study found that a quarter of churchgoers said they gave at least 10 percent of their income to charity, but in reality only 3 percent gave more than even 5 percent.

When we see a person begging on the street, we need to remind ourselves that in all likelihood we are not doing enough to fight poverty by sharing our own wealth. We can start being more generous by responding immediately to the need in front of us, the family outside the church building, the mentally ill man with a cup outside Starbucks, the homeless veteran with a cardboard sign standing at the stoplight.

Giving in such situations need not preclude giving larger sums to organizations that are better suited to meet the poor’s long-term needs. In fact, giving directly to the poor may make us more generous and more efficient in our organizational giving. As we get to know the poor through the human encounters that direct giving allows, we can come to better know their needs and begin giving more enthusiastic support to those organizations that meet those needs.