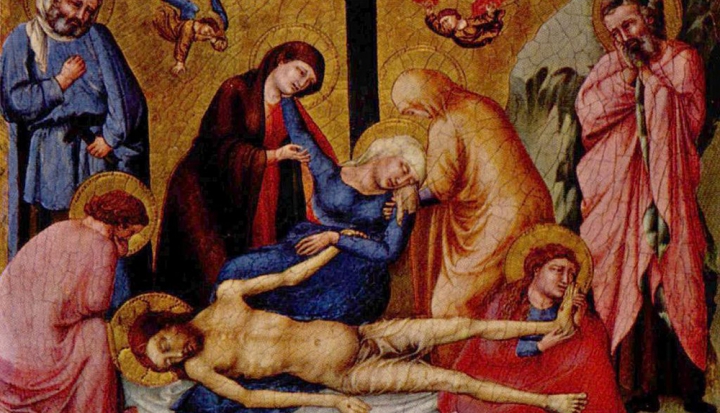 The logo for last year’s Year of Mercy, designed by Jesuit Father Marko Rupnik, depicts the Good Shepherd, who in his mercy takes humanity on his shoulders. When you look closely at the image, however, you see the shepherd’s eyes are merged with the man he carries.

The words mercy and compassion are often used as synonyms to refer to the concern we have for people in need. Even in the Bible, we rarely use these words very precisely. For example, Luke 6:36 is sometimes translated “Be merciful as God is merciful” (New Revised Standard Version, New American Bible, King James) or “Be compassionate as God is compassionate” (New English Bible, Jerusalem Bible).

But though the meaning of the words may overlap, they have slightly different connotations. Compassion comes from the two Latin words com (with) and pati (to suffer). It literally means “to suffer with.” Compassion helps us feel some of what the suffering person is feeling so that, in some sense, we can journey with them. Mary at the foot of the cross, suffering with her son, is a model of compassion.

The English word mercy, on the other hand, comes from the Latin merces, meaning “price” or “wages.” Mercy does not connote equality, but disparity. It is used to refer to our actions in response to another’s need: to offer help, cancel debt, or not hold accountable. To “show mercy” is to be in a position of power over another. In scripture, the rich and powerful are called upon to show mercy to the widow and orphan. In the parable of the unmerciful servant (Matthew 18:21–35), the master shows mercy by forgiving debt. Mercy offers greater kindness than what justice demands.

Mercy and compassion do not always go together. One can show mercy without feeling compassion. A judge can show mercy by offering a more lenient sentence because he feels great public pressure to do so, not because he necessarily feels compassion for the defendant. A ­landlord can show mercy because he wants to humble the tenant, to make her feel beholden to him. Similarly, one can feel compassion but not show mercy. We might do this when we feel sorry for a neighbor who loses their job but do nothing to help or when we see pictures of the poor in developing countries and think “what a shame” but do nothing more.

When Jesus tells us to “be merciful as our Father is merciful” he is not just telling us what to do, but how to do it. Jesus’ ministry and example bridge the internal and the external. Jesus tells us to forgive our enemies (mercy), but he also says to love our enemies and pray for those who hate us (compassion). In the Catholic tradition, the virtue of solidarity bridges the two terms. Solidarity is not just a vague feeling of compassion but rather a compassion for others that leads to a firm and persevering commitment to alleviate suffering, to act justly, and to show mercy.