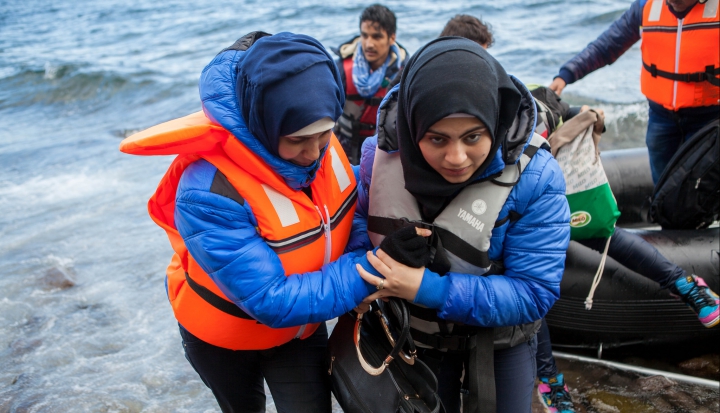 On Good Friday millions of Christians prayerfully mark the way of the cross. Pope Francis often notes that Christ’s crucifixion is not just historical but plays out today, and when we commemorate Jesus’ path to the cross we recognize the oppressed and violated in our world.

In his first papal homily, Francis urged a focus on journeying with people, building the church, and professing Christ crucified. As we prepare to celebrate Easter, Pope Francis asks us to inhabit rather than pass through Good Friday.

Jesuit theologian and martyr Ignacio Ellacuría explains, “The resurrection points back toward the crucifixion: the Crucified One rises, and rises because he was crucified.” Inhabiting Good Friday means considering all who have been “crucified” throughout history and today, and then imagining what might be their “resurrection.”

According to Pope Francis, we find the crucifixion in the thousands of migrants drowning in the Mediterranean each year and in the millions of refugees fleeing violence and poverty. For Ellacuría, these are the crucified peoples, the unnamed masses who suffer in the shadows from institutionalized violence and for whom death is a daily reality.

As I write this column, a recent executive order banning refugees from Muslim majority countries paints compassion and national security as mutually exclusive and foments fear. Facts and details about the refugee vetting process ring hollow in the face of fear  and uncertainty.

Inhabiting Good Friday asks us to seek out refugees and embrace their vulnerability in a way that makes many deeply uncomfortable. In his last speech, Martin Luther King Jr. offered a powerful reflection on the parable of the Good Samaritan and asked his audience to recognize our neighbor.

In Evangelii Gaudium (The Joy of the Gospel), Pope Francis asks us to “draw near to new forms of poverty and vulnerability, in which we are called to recognize the suffering Christ, even if this appears to bring us no tangible and immediate benefits.” We must learn to embrace our own vulnerability and move past our fears so as to draw near to the crucified peoples. We do so not because it brings us any tangible benefit but because of their equal human dignity.

On Good Friday, Christians find themselves face-to-face with Christ crucified. Inhabiting Good Friday involves making common cause with the world’s refugees. In doing so the hope of Easter is apparent in the Christian communities around the country anxiously waiting to welcome more families. The United States Conference of Catholic Bishops Migration and Refugee Services resettles 30 percent of refugees resettled in this country partnering with over 100 dioceses. We welcome them not because they are Catholic but because we are. We welcome them because we are both Good Friday and Easter people.