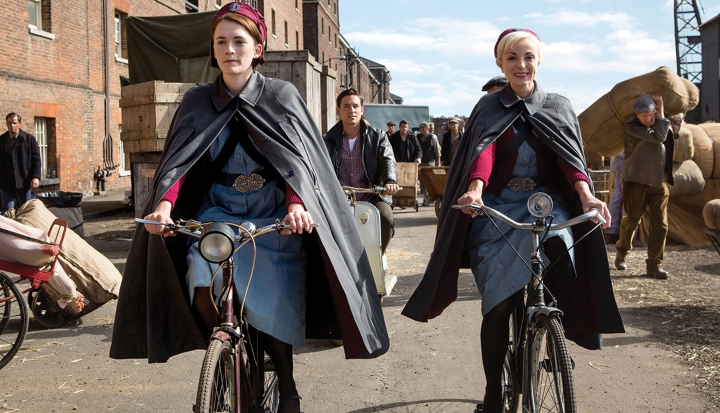 Childbirth on television is not, shall we say, precisely accurate. Hollywood seems to consider a new human being’s arrival on the planet to be utterly lacking in dramatic tension and so for decades has embroidered television and film stories about labor and delivery with implausible narrative flourishes apparently aimed at injecting excitement into something that is, in actuality, pretty darn exciting all on its own.

On the big and small screens, mothers-to-be give birth in school buses careening down the freeway, are trapped in phone booths during labor, start contractions at inconvenient times during alien attacks, surprise doctors with twins who went mysteriously undetected for nine months, and—perhaps most annoying to those of us who have been in labor lasting more than one sunrise—suffer a single twinge and within five minutes give birth at the supermarket.

However, Call the Midwife, a BBC television drama about post-WWII London’s gritty East End recently renewed for its sixth season, breaks with long-standing media tradition in two important ways. One, it tells refreshingly accurate stories of labor and childbirth while not flinching from the challenging realities and troubling ethical tensions of delivering health care to a diverse population at an historical moment of great social upheaval. Two, it intriguingly positions a religious order of nuns as grounded and essential mentors to unseasoned and privileged medical professionals who have much to learn about the subtleties and inequities of life.

The series is based on the three-book collection of memoirs by Jennifer Worth, one of a group of young lay midwives who lived and worked alongside the Anglican sisters of the Community of St. John the Divine, serving the poor of London’s Docklands tenements in the 1950s. The program’s fictional convent is called Nonnatus House.

The inexperienced midwives are plunged into a community of unemployed and working poor, making house calls to families living—sometimes in ignorance, sometimes in dignity—amid squalor and grinding poverty. The plotlines are engaging, credible, and relevant: unwanted pregnancies, infant mortality, public health crises of disease and infection, domestic violence, and the unrelenting racial and class tensions of postwar England.

At first, the midwives are blinkered to their own privilege and unacquainted with what life is like for people of different classes, races, and levels of education. The nuns lead the young midwives through bumpy lessons of how the world works, with all its imbalances and prejudices. Unlike familiar media representations of men and women religious as prim, judgmental, or out-of-touch, Call the Midwife brings us nuns who are sharp-eyed observers of their community, dispensing compassionate care with wisdom and without condemnation.

There’s a lived experience of feminism here that is deeply touching. In the early 1950s, there was little gender diversity amid midwives and physicians, and male doctors appeared only for the most at-risk deliveries. Birth after birth occurs with only women supporting women, and the fortitude and competence of the midwives, nuns, and mothers constitute a type of admirable and strong media heroine that has nothing to do with physical appeal and everything to do with character—a representation of women that is all too rare at the box office.

Most impressively, Call the Midwife does not fall into the predictable trap of white savior narratives—those films and television programs that represent Western Europeans as liberators of indigenous peoples or whites as redeemers of people of color (Avatar, Dances with Wolves, The Blind Side). The nuns of Nonnatus House scrub away any of the midwives’ illusions that their white or upper-class origins might have imbued them with special insights or abilities to remedy the social dilemmas and tensions of the East End in the 1950s. One of the most pressing needs of the poor, as the nuns address it, is to be respected as being capable of managing their own lives.

Since the program’s central topic tends to the reproductive health of women inhabiting the low end of the economic spectrum at a time when Britain’s resources were severely stretched, rich opportunities abound for story narratives about ethical dilemmas that resonate as relevant and critical even today. Treating their patients, the midwives confront the consequences of superstition and misinformation about pregnancy and contraception, birth anomalies, racism, prostitution, and changing cultural mores. The contrast between their well-intentioned naïveté and the discerning perspectives of the veteran Nonnatus House sisters offers audiences a chance to suspend rigid attitudes and engage with deeply challenging ethical issues as stories—a time-honored device for thought-provoking theater and one that Call the Midwife handles with insight and delicacy.

In Call the Midwife, labor hurts, it drags on forever, women doubt themselves and get exhausted and summon reserves they didn’t know they had, and babies are born into worlds not of their making. Still, even when a child arrives in an already financially strapped family or to a homeless prostitute or with thalidomide-caused anomalies, there is a certain magic and even sacredness to the moment—not a sappy, overly sentimental moment, but an authentically human one that veterans of the delivery room will recognize.