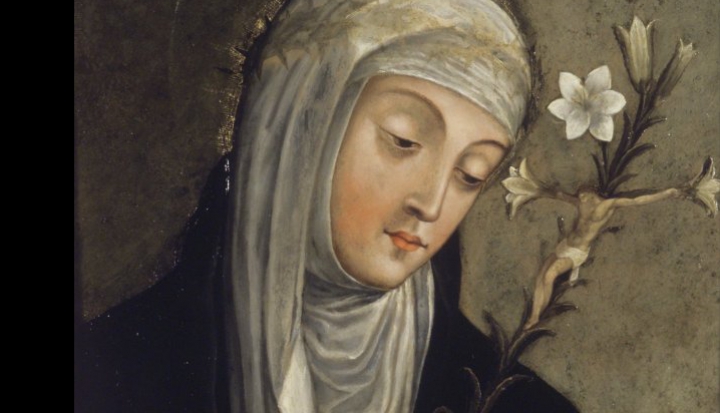 Papal counselor, politician, Doctor of the Church, preacher, spiritual advisor, and theologian: Catherine of Siena wore many hats, and occupied a very visible place in the church of her day.

Every year, the Catholic Church celebrates Catherine’s feast day on April 29, the day that she died in 1380. The editors at U.S. Catholic sat down with Elizabeth Dreyer, a professor of religious studies at Fairfield University, an expert on medieval women’s voices in the church, and the author of Accidental Theologians: Four Women who Shaped Christianity. (Spoiler alert: One of those women is Catherine.) We spoke with her about Catherine of Siena’s theology and the legacy she left behind.

In this extract from the full interview (which will appear in our August issue), Dr. Dreyer speaks about what we can learn from Catherine and why it’s important to talk about her in the church today.

Well, first of all, she’s female. That’s not the richest, most deep argument for considering Catherine of Siena, but there are so few women who left records, and in her case we have this huge corpus of writings.

We have so few female voices to look at and ask, what was God up to? But with Catherine there’s so much to examine: the quality of her writing, the content of it, the complexity, the creativity.

Catherine broke a lot of boundaries about what was acceptable for women at the time. She belonged to a group of women called the Mantellate (after her death this group joined the Dominican order and became the third order). These women were very visible. They had specific garb and were on the streets of Siena, taking care of sick people, etc. In the last five or six years of her life, Catherine surfaced as a force to be reckoned with in this community.

Catherine had lots of doors open to her in the political and religious realm. Her brothers were very active in Italian politics. I’m not sure what words to use to describe 14th century Italian politics—rough, violent, and vindictive.

She was raised in that milieu, like Hildegard and a lot of the aristocratic women who became recognized as saints in the church. They hobnobbed with a lot of very important people.

The last five years of her life, she was involved in getting the pope back to Rome (she lived during the time of the Avignon papacy) and trying to reform a church that was unbelievably dysfunctional. She had to deal with war and the plague. It was a hard time, even by medieval European standards.

Despite these hardships, Catherine rolled up her sleeves and worked to create change on a political level. Granted, she came from a family situation where she had access to this political world—most of us don’t. Then again, everything is political. There are political dynamics and work even at the playground. And Catherine is a good model for us.

These women are models for us on so many levels. They used their minds, and they didn’t divorce their minds from their hearts and their bodies. They took steps that took so much courage. I’m not going to be injected with a lethal dose of something because of what I say; people today can say what we want. But Catherine and women like her took risks and had tremendous courage, faith, and conviction.

It’s not in the same category, but you could ask a similar question about authors like Chaucer or Shakespeare. Why should someone read their works? All are hard reads that were written in a different time and different language. Why bother?

I say to people, “If you think history is perfect, forget it.” Some people sacralize history, say it’s all perfect and 100 percent beautiful because it’s tradition. But history is messy. Instead, I would argue that this is who we are. These are our ancestors. It’s hard for me to imagine that you would have no interest in your family history, who you are, or where you come from. If you’re interested in yourself as a question, people like Catherine are important, they help you shape who you are.

We have some obligation and privilege to look at the past. It’s not for everybody. Reading Shakespeare and Chaucer and Augustine is not for everybody, but those of us in this work are preaching the word to get as many people as we can who think they might benefit from it.