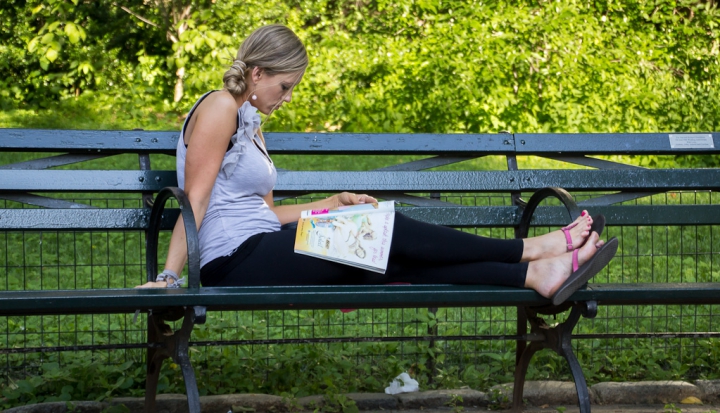 The uniform of college students changes every few years. When I first began my teaching it was bell-bottoms, then dancers’ leg warmers, Uggs, and skinny jeans. Now it’s leggings, colorful rubber boots, and yoga pants. For the guys, I remember the first baseball caps in the classrooms, then it was backwards baseball caps, sideways baseball caps, and now baseball caps with painfully flat brims and a sticker. How do these changes happen?

My mom was convinced that a coven of women-haters convened every year in Paris to enthrone what would be the most unflattering articles of clothing. Watching Meryl Streep in The Devil Wears Prada, you might think so. But in truth, nobody entirely controls fashion. Much as we might like, we cannot hold Madison Avenue or Vogue accountable. Nobody sees the vast majority of fashions coming.

For the most part the logic of fashion is driven by something like market forces. And, like other markets, its hands are powerful and pretty much invisible. Walk across a campus or through an airport or mall and just imagine all the factors at work that lead people to dress in the styles they wear. We’ve all felt the pressure of the invisible hands of fashion, whether we want to be fashionable or not. How many millions of us have purchased yoga pants or baseball hats with flat brims? No doubt some of us do yoga and play baseball and need the appropriate uniform, but something else is going on here. Where did our desire to make those purchases come from?

Moreover, how fashion changes—from bell-bottoms to yoga pants—is unpredictable. The market that drives it does not follow an order and no fashion is eternal. In the marketplace that is fashion, no style is sacred from tweaking, replacing, or even transgressing.

Catholic social teaching says nothing about yoga pants or baseball caps. But the church does say something about market forces.

Traditional church teachings have some issues with markets. The biggest is with the way that market forces interact with and shape our values. This happens in both direct and indirect ways. Some values actually seem to be directly generated by market forces. Think here on Pope Francis’ many arguments about materialism, self-focus, and greed.

More subtly and indirectly, though, markets also encourage us to look at everything else in market terms. Truth is decided by the free market of ideas. Human life in all of its stages is objectified and traded like a commodity. Ditto with human labor. What is good or right becomes viewed not as something sacred or eternal; it’s something that can change, like fashion. Yoga pants are good this year, but who knows what will be the right and good next?

By their nature, markets have nobody who can be held accountable. They can’t be held responsible because they operate often invisibly and beneath our control. This is what Pope Francis means when he says markets have no human face. Yet market forces can move things in terrible directions—and I don’t just mean those flat-brimmed baseball caps. Markets can also be repressive; almost by definition they squeeze out what is marginal, including those people who live on the margins of society.

For all these reasons, the church argues that some things are too important to risk being tweaked, replaced, or transgressed by market forces. Even more importantly, because they can impact social and cultural values, markets should operate within a framework of unchangeable, sacred, and eternal values and truths. Given their potential dangers, it is a moral imperative that markets have a human face—both as a measure to protect the marginalized and so they can be accountable to the common good.

Maybe none of this matters for something like fashion and yoga pants, but the stakes become clearer when we think about technology, medicine, the economic market of consumers and producers, global climate change and the environment, poverty, and so on.

Pope Francis, echoing similar arguments by Pope Benedict and Saint John Paul II, has made several pointed observations on this topic. Evangelii Gaudium and Laudato Si’ propose many solutions, and both discuss the appropriate roles for international bodies, governments, civil organization, and individuals to ensure that markets do not oppress, serve the common good, and answer to what is sacred and eternal. In the last year, Pope Francis has on several occasions raised up the traditions of Catholic social teaching and invited Catholics to rethink our contemporary world’s reliance on markets that too often seem at odds with human life and dignity.

My best thinking happens, coincidentally, as I walk, with my baseball cap worn the old-fashioned way. If yoga pants do the trick for you, go for it.