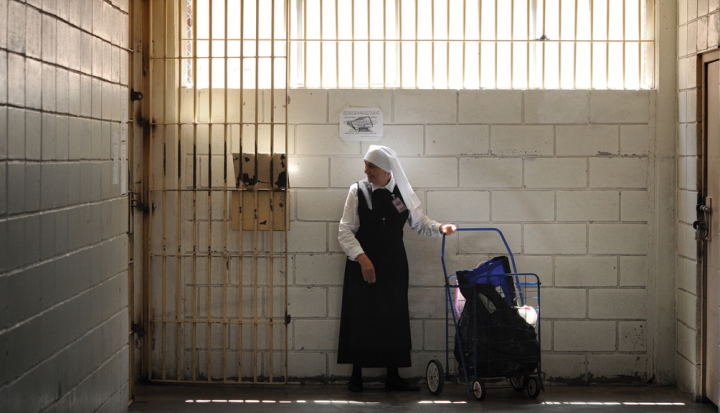 The tough and tender mercies of women religious transform the most remote and desolate corners of poverty, misery, and heartache.

It takes nerves of steel to stand in your doorway and tell rebel soldiers waving guns that no, the woman they are seeking is most certainly not in the room behind you, when in fact she is hiding a few feet away, under your bed. But that’s what Sister Rosemary Nyirumbe did.

It takes stunning courage to spend your life with the drug traffickers and other offenders serving time in Mexico’s most notorious prison, but that’s what the late Mother Antonia Brenner did, with a commitment to this work of mercy that her fellow sisters still carry on today.

It takes an ocean of faith in God to bid a bittersweet farewell to your cherished work in Catholic education and move 800 miles away to live and work with the poor. But that’s what Sister Johnna Ciezobka and Sister Susanne Dziedzic did.

It takes bold creativity to decide you will be the one to reach out to farmworker families in California who speak only one language, Mixteco, of which you can speak about three words. But that’s what Sister Sandra Silva did.

In the years since the Second Vatican Council, after many women religious turned their Catholic schools and hospitals over to the capable hands of laypeople, they frequently found their new callings among the poor in places often referred to inelegantly as “the middle of nowhere.” These women anticipated by decades the call of Pope Francis: “We must get out of ourselves and go toward the periphery.”

If you happen upon a forgotten corner of desperate poverty or a neglected collection of humanity, chances are good that a religious woman has arrived before you. You’ll find her running a soup kitchen or a food pantry, teaching someone to read, praying with farmworkers in the fields, or caring for men and women on the streets, in prison, or in the hospital.

It would be a gross understatement to say that these women do not seek publicity for their work. Indeed, they often hide from the limelight, as journalists trying to track them down can attest. “You get sick of hearing how great you are,” says one sister who, not surprisingly, requested to remain anonymous.

Thérèse Del Genio, a Sister of Notre Dame de Namur who currently staffs a homeless shelter in Cincinnati, did go on record to explain why women religious are often reluctant to be in the spotlight. “We’d rather have the light shine on the people we’re working with,” she says.

La Mesa State Penitentiary in Tijuana, Mexico has long had a reputation as one of the country’s most notorious prisons. Housing many of the country’s convicted drug traffickers, La Mesa was once dominated by the infamous El Pueblito gang and in 2008 was the site of brutal riots when the inmates staged an uprising against the overcrowded facility’s living conditions and brutal treatment by guards.

But for more than 30 years the prison was also home to Mother Antonia Brenner, founder of the Eudist Servants of the Eleventh Hour. Brenner lived in a 10-by-10 foot concrete room and slept on a small cot, carrying out her ministry by providing spiritual and material aid to the prison’s inmates. Today members of the Servants of the Eleventh Hour continue to carry on the work of Brenner, who died last year, by serving the inmates of the prison.

The sisters in Tijuana are not alone—many women religious serve as chaplains in state and federal prisons throughout the United States, offering critical outreach to an often forgotten population.

You always do a better job on your homework with Sister Rosa at your elbow. That’s just one lesson learned by the children in the after-school program of Vietnamese Holy Martyrs Church in Colorado Springs, Colorado where Salesian Sister Rosa Hoang patiently offers homework help. As the hundreds of Vietnamese Catholics in Holy Martyrs routinely work long hours for very low pay, the homework assistance for their children is a godsend. Although many women religious have officially moved on from the Catholic schools they established and once staffed in great numbers, many are of course still educating: tutoring, running after-school programs, teaching people to read. Who better than a sister to testify to the power of a good education—how it makes possible the climb out of poverty, how it frees the human spirit?

Sister Sandra Ann Silva visits with Reyna Valentin and her son Adrian in the three-bedroom home they share with two other families. Seven years ago, Silva, a Sister of the Holy Family, began an outreach to families from Oaxaca, Mexico now living in often deplorable conditions in and near Watsonville, California. From April through November the men and women pick strawberries in the fields—they are incredibly hard workers, Silva says. Adults coming from Oaxaca typically have just a few years of education, or none at all; many speak Mixteco, but not Spanish or English. Although most are baptized Catholics, almost none have received other sacraments due to the remoteness of their home in Mexico. They have never attended Mass in their own language, says Silva, whether in Mexico or in the United States. Silva builds trust through home visits; she then draws families toward the sacraments and also to community resources. Her latest project is a video that advises mothers on how to choose good child care. This stems from cases of unscrupulous local providers found to be accepting large numbers of children and then not taking them out of their car seats all day, not holding them, not changing them, sometimes not even feeding them. “The church needs to be out there,” says Silva. “We can’t be waiting for people to come to us.” Read more about Sister Sandra’s ministry.

Separated from their families for months on end, the migrant workers in Washington County, Tennessee look forward to the visits of Sister Isabel Gonzalez of the Missionaries of the Sacred Heart of Jesus, with whom they can pray, sing, say the rosary, and find a listening ear and a smile. As many religious orders have taken a public stand in favor of comprehensive immigration reform, women religious across the United States reach out to immigrant families, migrant farmworkers, children who have arrived in the United States without their parents, as well as immigrants being held in detention centers. In this they excel at heeding the ancient biblical call to care for the widow, the orphan, and the stranger.

The first ministry launched by Sister Johnna Ciezobka and her fellow Felician Franciscan Sister Susanne Dziedzic after they arrived in Kingstree, South Carolina in 1992 was an after-school program. Here, Dziedzic greets Auja Gadson, one of the 40 youngsters who attend the program today. The sisters’ original back-porch tutoring sessions grew into the St. Ann Catholic Outreach Center, which now attracts 60 volunteers from many different denominations—a miracle unto itself, according to the locals, in an area where churches traditionally have kept their distance from one another, and particularly from Catholics. Volunteers offer a clothing closet, a food pantry, hot meals, legal assistance, health screenings, emergency housing help, as well as classes in cooking, art, science, and computers. Many credit the sisters not only with restoring the neighborhood but also with igniting a new spirit in the entire town of Kingstree. Sister Johnna Ciezobka, Sister Susanne Dziedzic, and Sister Mary Jacqueline Benbenek received the 2012 Lumen Christi Award from Catholic Extension.

“We’re used to picking things,” says Sister of St. Joseph of Carondelet Kathleen Heffron. Heffron and two other Sisters of St. Joseph began Cortland-Chenango Rural Services 27 years ago in Cincinnatus, in the heart of central New York State. Along with 62 volunteers, they offer low-income rural residents a clothing closet, food pantry, family counseling, and a farmers market, among many other services. Here Heffron picks pears from a tree belonging to local resident Dorothy Hathway, who called to offer the ripe fruit on her backyard trees. Heffron devises creative ways to deliver fresh, healthy foods to families more accustomed to eating Chef Boyardee from a can: Grants provide families with gift certificates to the weekly farmers market, for example. Sometimes local apple orchards will call with an invitation as well. All donated fruits and vegetables are set out free of charge for anyone who visits the center. Heffron urges volunteers never to use the term “clients.” “They’re your brothers and sisters,” she says. “That changes your whole approach to people. If you see someone who’s your sister or brother who has a problem, you have a tendency to listen.”

Sister of Mercy Mary Scullion will tell you that her education while attending St. Joseph’s University in Philadelphia came not just in the classroom, but on the city’s streets. There she met many people experiencing homelessness and began to learn their stories, no longer passing by and thinking, “There but for the grace of God go I,” but rather, “There go I.” That was more than three decades ago, and Scullion has since devoted her life to finding permanent solutions to homelessness and poverty in Philadelphia. In 1989 she and Joan McConnon cofounded Project HOME, a nationally recognized organization that has made great strides in breaking the cycle of poverty and reducing homelessness in Philadelphia. The organization’s work has become a model for other cities and has earned Scullion numerous awards and a place on TIME magazine’s 100 most influential people list in 2009. Her supporters range from Bill Clinton to Jon Bon Jovi. But you’re still likely to find her on the streets, as she is here on a cold winter night in 2013, leading a memorial service for those who died during the previous year as a result of their experiences of homelessness.

In the documentary film Sewing Hope, which chronicles Sister Rosemary Nyirumbe’s ministry to girls who were child soldiers during Uganda’s civil war, a young woman tells of being forced to kill her own sister because the child was too heavy for her to carry across a river. Listening to the story is almost unbearable. Yet Nyirumbe, a Sister of the Sacred Heart of Jesus who was named one of TIME’s 100 most influential people in 2014, meets stories of similar pain, grief, and anger every day in her work with these young women. Kidnapped by Ugandan rebels to be used as soldiers and sex slaves and forced to commit atrocities in their home villages, the girls were ostracized when they escaped and tried to go home. Nyirumbe turned the sisters’ St. Monica’s School into a training center, teaching the girls sewing, catering, and other skills to support themselves—and giving them hope. The school also educates the young women’s children, to whom they gave birth while in captivity. As for the origin of her phrase “sewing hope,” Nyirumbe says, “I say, use your needle, use your hand, sew away the pain, sew away anything people will say about you. People may call you a failure, but you’re not. People may call you a rebel, but you’re not—you’re a human being.” Read more about Sister Rosemary’s work and about the pop tab purses made in Gulu that support the girls and the school, available for ordering.