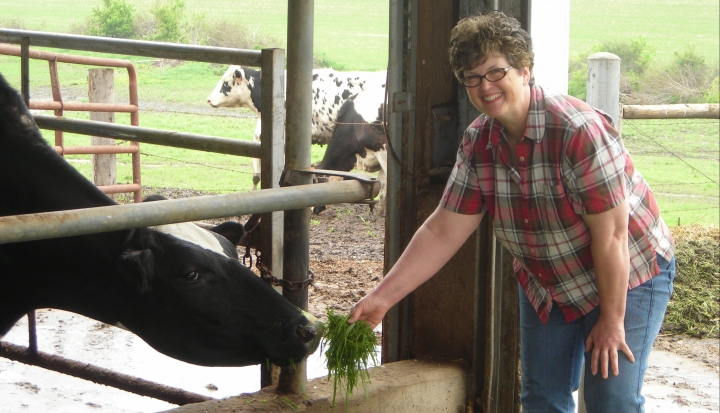 The year 2009 was a particularly challenging one for independent farmers like Teri Rosendahl. With the global financial crisis in full swing, small family farms were hit hard, and Rosendahl and her husband, Peter, were forced to mortgage a lot of the equipment they used at Udder Valley Dairy in rural Spring Grove, Minnesota just to get by. But from small daily struggles to major financial obstacles, challenges had simply become a way of life on the small, family-owned dairy farm.

“[Dairy farmers] are constantly faced with new challenges every day, whether it’s a new heifer, taking care of more calves, breakdowns in equipment in the parlor or in the field, or a flat tire on a manure spreader,” says Rosendahl. “We are constantly thinking of creative ways and ideas to survive with the ever-fluctuating weather, prices, and expenses.”

Eventually those challenges became too great for the Rosendahls, however, and the couple was forced to make the difficult yet inevitable decision to close their farm last August. “I told my husband that God does not need to give us any more signs,” says Teri, who credits her strong Catholic faith with helping her through difficult times. “We know we are done here and need to trust God that there is something else out there for us.”

The Rosendahls’ story provides a candid look at the plight of the modern American farmer; only about 51,000 dairy farms remain in the United States, according to 2012 figures—a number that is shrinking every decade. The trade publication Hoard’s Dairyman reports a loss of more than 80,000 dairy farms since 1992, a 61 percent decline.

This won’t be the first career change for Teri Rosendahl, who made the decision to quit her day job about five years ago to help her husband run the farm full-time. Although originally from a small rural town, she did not have prior farming experience. But it was those small town roots that shaped her faith and the way she approached farming. Udder Valley Dairy maintained a strong commitment to sustainable farming—all of their cows were raised without shots and fed conventional (as opposed to genetically modified) corn.

The ever-changing definition of “sustainable” practices, and its relationship to corporate interests, is particularly troubling to Rosendahl. She cites the United Nations’ Agenda 21 as an example of sustainability gone wrong. Agenda 21 provides a blueprint for sustainable development—development that simultaneously promotes economic growth, improved quality
of life, and environmental protection.

What concerns Rosendahl is that the corporate giant Monsanto, known for its controversial business model, lobbying, and its widely criticized genetically modified organisms (GMOs), has joined the World Business Council for Sustainable Development. This worldwide group of major corporations banded together to implement Agenda 21’s objective of sustainable development, putting the power in the hands of corporations, not farmers. In Rosendahl’s estimation, Monsanto’s GMOs are symptomatic of a disrespect for natural life.

In 2012, Rosendahl also took an active role in lobbying for better policies in the Farm Bill, the federal legislation that governs a wide range of agricultural and food-based policies. She says there’s a need for more social awareness about the plight of the American farmer. “Be open-minded as to why we do what we do,” she says. “Not all farmers do what hits the headlines.”

Although she is no longer a full-time farmer, the lessons Rosendahl learned will stay with her long after the last cow has been milked. “We are kept humble by the fact that we know we cannot do it alone. Many friends and family pray for us every day,” she says. “And when a cow tail loaded with manure slaps you in the face while you are milking, (it) has a way of also humbling.”

For more on farming and food, read these sidebars:

Lauren Caggiano is a writer based in Fort Wayne, Indiana.

Ask an Apostle: Should I give money to the homeless?