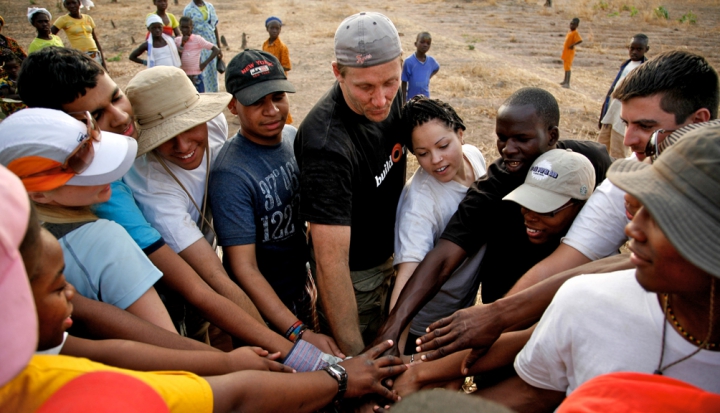 Undeterred by threats of failure, Jim Ziolkowski is proof that one man can build a better world.

After graduating from college in 1989, Jim Ziolkowski yearned for an adventure. So he bought a backpack, hopped on a plane with his brother Dave, and hitchhiked across Europe. When his younger brother had his fill and flew back home, Jim had other ideas. Exotic lands beckoned—places like Thailand, India, and Nepal. This time, he set out solo.

For a kid from a small town in Michigan, Ziolkowski’s Asian expedition was upsetting. “I had never seen such extreme poverty, desperation, and hopelessness,” he says. “It planted a seed. When I got back to the United States, I saw poverty in a different light.” Specifically, he saw that poverty flowed from a lack of education, and he felt called to do something about it.

“But I chickened out,” he admits. Instead Ziolkowski entered General Electric’s financial management program. It seemed like the smart choice, but his vision soared beyond the corporate walls. Just 15 months later, he quit that job to follow his passion.

Today Ziolkowski serves as president and CEO of buildOn, an organization that he founded to “break the cycle of poverty, illiteracy, and low expectations through service and education.” Last year he released a book, Walk in Their Shoes: Can One Person Change the World? (Simon & Schuster), a chronicle of his personal journey. It’s also a story about how anyone can create change through faith and service to others.

Ziolkowski credits his Catholic upbringing with sensitizing him to social issues. His father, a devout Catholic and fan of Thomas Merton, was his first role model. When Jim went to Africa to build his organization’s first school, he contracted malaria and nearly died. That’s when he keenly felt, though vicariously, the painful consequences of economic injustice. “In that part of Africa, most people don’t just have a near-death experience,” he says. “They die because they don’t have the $20 to pay for medical care.”

That was in 1992, right after Ziolkowski and his brother took a 14-hour ride in an all-terrain vehicle to break ground for a school in a remote village in Malawi. Surviving malaria wasn’t the first victory in his quest to build a school there. He had already survived stacks of rejection letters—and the crisis in confidence and sleepless nights they delivered. “We would go to corporations and they would just give us reasons why we would fail,” he recalls.

After tossing and turning one night, he grabbed a Bible and turned to the story in Mark’s gospel of Jesus raising the daughter of Jairus. One passage in particular moved him: In Mark 5:36, Jesus tells Jairus, “Do not fear, only believe.” In a flash, Ziolkowski got it: “Fear is useless. What is needed is trust.”

Not long after that, GE agreed to chip in $25,000 in start-up money for Ziolkowski’s project—even though his bosses bet he’d be back at his desk within six months. Back then, no one would have wagered on GE execs sitting on the board of an organization called buildOn. They do now.

Native villagers, who help build the schools, sign buildOn’s “covenant,” a solemn promise to contribute land, labor, and resources. This creates a sense of ownership and empowerment. The fact that volunteers from these communities have freely given more than 1 million “work days” worldwide demonstrates their commitment, says Ziolkowski.

These students are driven, Ziolkowski says, pointing to the 1.2 million hours of service they’ve clocked. And 95 percent graduate from high school and go on to college. One study even shows they benefit from greater academic engagement, improved leadership skills, and an expanded awareness of social issues. Ziolkowski, who calls his organization “a movement, not a charity,” sees buildOn empowering millions of people 20 years from now.

Ziolkowski’s commitments—and challenges—also extend to his family: his wife, Jenny; and his sons, Jack, 9, and Quinn, 6. Jack suffers from seizures due to meningoencephalitis, a serious medical condition. “Three years ago, he was hospitalized for 56 days. Most don’t survive,” Ziolkowski says. “It’s helped me relate to the families in Malawi. It’s given me another layer of empathy.”

As for the decision to leave behind a secure corporate career all those years ago, Ziolkowski has no regrets. “I never look back,” he says. “This path was right for me.”