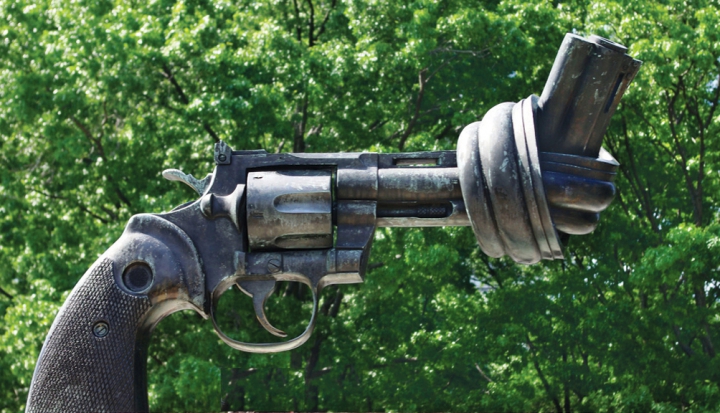 Perhaps only the global drug trade has been less scrutinized than the $70 billion annual market in conventional weapons. The world community took a significant step toward changing that situation in April when it approved the historic global Arms Trade Treaty (ATT) that will for the first time attempt to set limits on arms transfers between states and non-state actors. The idea is not unlike smaller-scale theories of gun control in the United States: By controlling who is allowed to buy weapons and reducing their circulation, the new international protocol should diminish the harm of armed conflicts, or at least make them difficult to initiate or continue.

Conflicts around the world claim as many as half a million lives each year and have driven 41 million people from their homes as refugees. Thousands of women are physically and sexually assaulted each year by men armed through the global trade, and weapons are frequently forced upon child soldiers kidnapped and forced into conflict.

The arms trade not only facilitates the ongoing mayhem in the Democratic Republic of the Congo, for instance. It has also become one of the leading forces propelling the various struggles in that country, as armed groups fight over control of mining riches to help pay for the conflict’s ceaseless appetite for weapons—a perfect negative loop of localized violence.

Critics of the treaty complain, with some justification, that it leaves out too many weapons systems and leaves open too many loopholes which arms merchants may exploit. Vatican officials, acknowledging those problems, still regard the affirmative vote as a positive step forward after 10 years of diplomatic struggle toward passing the ATT. Just as U.S. Catholic bishops have for decades supported common sense containment of the American gun culture, the global church has long advocated tighter controls on the international trade in conventional weapons.

In supporting the treaty, the Holy See Mission to the United Nations called for reorienting the regulation of the arms trade “from one which is controlled through the lens of sheer economic interests to one which places overriding importance on human concerns and protecting human life.”

Arguments against the treaty include one that will be familiar to American ears: that global criminals, despots, and terrorists who don’t follow laws in the first place will simply find trading partners willing to ignore the treaty for the right price. That criticism may be accurate to a point, but it ignores the more important effect of the treaty—getting major players in the formal arms market to stop behaving as the wholesale source for the criminals.

To that end, the treaty requires exporting states to certify that arms shipments are not going to land in the hands of end users who are culpable in genocide or human rights abuses, which, believe it or not, is the first time such an obvious restriction will apply.

An effective treaty is far from a done deal. There is much resistance to the ATT around the world. Russia and China, two of the world’s biggest exporting states, joined 20 other nations in abstaining during the General Assembly vote, but the United States, the world’s biggest arms exporter with 40 percent of the lucrative, lethal market, is, at least for now, on board with the stated goals of the treaty. Getting that exporting triumvirate to clean up its act would contain many of the weapons leaks into conflicts where human rights abuses are rampant.

Does the new treaty mean an end to the violence? No, assuming the ATT achieves the 50 signatures of U.N. member states required for its ratification, it will not be enough to stop all the trafficking of weapons worldwide. But to do nothing while the suffering persists is to be complicit in the violence—something legalistic perfectionists in the United States might wish to remember as America confronts its own problem with small arms.