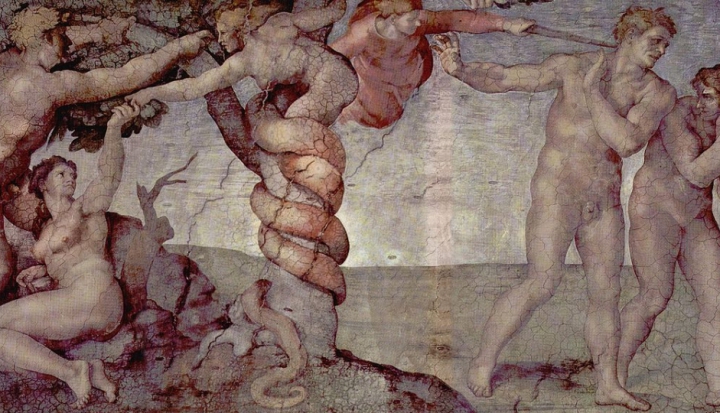 You won’t find the phrase “original sin” in the Bible. The story of humanity’s “fall” in Genesis 1 doesn’t use the term, and St. Paul, one of the church’s earliest theologians, only hints at it in places. After the first century the early church fathers started to define it, but those in the East and West took different approaches.

Both groups acknowledged that sin had entered the world through Adam and Eve’s disobedience to God’s command, but the Eastern fathers did not think guilt for that sin was passed on; rather, human beings in subsequent generations imitated their first ancestors’ misbehavior. The Western fathers, however, believed sin was passed on like a hereditary disease of the soul (thus the emphasis on baptism erasing the inherited “contagion of death,” to use St. Cyprian of Carthage’s phrase).

Saints Irenaeus and Augustine illustrate these two perspectives. For Irenaeus the disobedience of the first parents was rather like the actions of a child who didn’t know better. Augustine, however, thought the first sin had resulted from a very conscious, adult decision that actually damaged human nature and was passed on through procreation.

But a question remained: Why did the possibility of sin enter the world in the first place? Irenaeus thought the turning away of Adam and Eve from God resulted from their immaturity and weakness. Augustine saw the source in a fatal flaw in human nature: pride. For him pride meant the capacity to exercise free will to choose to try to live without God—to see yourself only in reference to yourself, not to God, and to have a sense of false autonomy that you forget you are created.

Through the Middle Ages and after the Reformation, Catholic theology began to emphasize another aspect of the doctrine of original sin: the absence of “sanctifying grace,” the indwelling spirit that brought the inner harmony and holiness that Adam and Eve had before the fall.

Most of those explanations were based in part on a literal reading of the story of the fall. Very few people today other than fundamentalists and creationists believe in an actual first couple named Adam and Eve who physically bequeathed their sin to the human race.

But you don’t have to look very long at the human condition to see the continuing relevance of the idea of original sin. The presence of so much violence, selfishness, corruption, stupidity, and cruelty in the world points to the fact that Augustinian “pride” is still alive and kicking, and it is evidence that indeed something at some point seems to have gone seriously wrong with human nature.

The Christian answer to original sin, however, has always been redemption and salvation: the ongoing possibility that human beings, through Christ, can open themselves to goodness and love and restore their relationships with God and one another.

Image: The work of art depicted in this image and the reproduction thereof are in the public domain worldwide. The reproduction is part of a collection of reproductions compiled by The Yorck Project. The compilation copyright is held by Zenodot Verlagsgesellschaft mbH and licensed under the GNU Free Documentation License.