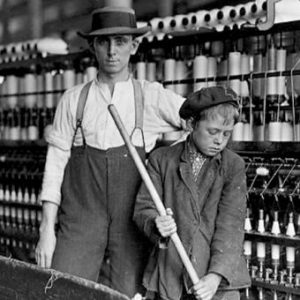 “How oppressed exactly do workers have to be before we consider them slaves?”

Here’s a New Year’s resolution that I never thought I would have to make in this early stage of the 21st century: For 2012 I firmly resolve to do my best to stop using slaves. Difficult as it is to accept, slavery remains a contemporary misery all over the world. “Abolition” has an old-timey, 19th-century ring to it, but a world that is truly free of slavery remains out of reach and modern abolitionists have their work cut out for them.

According to the International Labor Organization (ILO) there are at least 12.3 million people in some form of forced labor throughout the world. That’s about four out of every 1,000 people in the global workforce. Other estimates place the figure much higher, to as many as 27 million people.

A tiny fraction of the world’s slaves live in the United States. Most come under the enthrallment enforced by the world’s blackest market, human trafficking. Victims of human trafficking live and work among us almost invisibly, but you can find them in the businesses American consumers visit each day, working on our farm fields and front lawns, in our hair salons and restaurants. Under the worst of circumstances, modern slaves are used as sexual chattel in strip clubs, brothels, and massage parlors.

If you are scrupulous in the contractors you hire, the services you use, and the restaurants you visit, you can probably assure yourself that you have not contributed to modern slavery. But what about the things we buy from places we’ve never seen? It is on the lower rungs of global capitalism that the phenomenon of contemporary slavery is most prevalent.

The ILO reports that most of the world’s forced labor occurs in Asia, where more than 9.5 million people are in some form of exploitative agricultural, industrial, or sexual work. But pockets of slavery— regional or within labor sectors—can be found all over the world. They are often buried at the bottom of the global manufacturing supply chain—from farmworkers picking cotton in Egypt to make the clothes you wear to tantalum miners in the Democratic Republic of Congo collecting the mineral that helps power the modern world’s smartphones and laptop computers.

One of the major contemporary excuses for slavery from manufacturers, retailers, and, let’s face it, consumers is: “I didn’t know.” But websites like slaveryfootprint.org make that statement hard to defend. Just walk through its clever interface to find out how many slaves work for you.

My total was a shocking 92, but more shocking was the source of the majority of “my” slaves: the clothing I buy and the plastic toys I purchase for my children. Not only does slaveryfootprint.org explain how your purchases contribute to modern slavery, it also offers practical suggestions for what you can do to end it by pressuring manufacturers to devise practical, enforceable standards for sourcing raw materials and the treatment of workers.

And once you’ve let your outrage percolate on outright slavery, you might want to save some fury for the plight of the world’s near-slaves. Precisely how oppressed exactly do workers have to be before we consider them slaves? With the fat profit margins maintained on many consumer products, there is no excuse for the literal or practical enslavement of the people at the bottom of the supply chain.

The Catholic Church has something of a checkered past with slavery, but after hemming and hawing about it for a few centuries or so, it began putting together the moral case against slavery in 1839, when Pope Gregory XVI’s In Supremo Apostolatus condemned the trade and the institution. By 1965’s Gaudium et Spes the church was able to describe slavery as “a negation of the honor due to the Creator,” and in 1993, Pope John Paul II upgraded slavery to “intrinsically evil” in Veritatis Splendor.

Of course, you only need to consult a brief passage in Galatians to know that in the world we are co-creating, there will be no distinction between master and slave. It’s about time we began honoring that clear instruction.