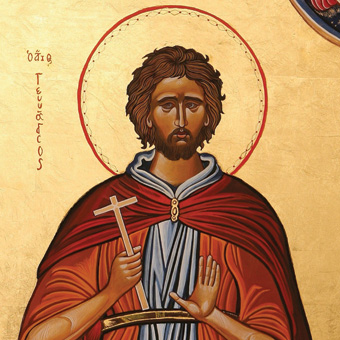 Anyone who was a member of a Catholic high school or college drama club during the 1950s and ’60s no doubt knows about St. Genesius—the patron saint of actors. According to legend, he was an actor during the reign of the Roman Emperor Diocletian in the third century. To win the emperor’s favor, he took on a role satirizing a Christian about to be baptized.

While reciting the act of faith during his performance, Genesius was seized by the truth of what he was saying and converted, there and then, to Christianity. The emperor was infuriated, demanding that the actor recant his faith. When he refused, he was immediately put to death.

The details of the Genesius story can’t be verified. It is speculated, however, that his remains are buried in the Church of Santa Susanna in Rome, where there is a cycle of frescos depicting his life. His martyrdom is recorded in Lo Fingido Verdadero, which means Acting Is Believing, a play written in 1608 by the Spanish classical tragedian Lope de Vega.

I recall that, as a high school thespian, the story of Genesius seemed archaic. What relevance could it possibly have to our drama society’s upcoming production of Our Town? Sister Immaculata, who directed the show, gathered the cast before each performance to pray—our way of calling on the muses—then concluded with the petition, “St. Genesius, pray for us.” Other than that, there seemed to be no connection between his brave act of martyrdom and what we were about to do onstage.

It is only as I have matured as an actor and as a Christian that I have discovered the importance of the Genesius legend. It reveals the link between the art of acting and the act of faith: Both the actor and the believer are involved in a transformation from one persona to another. Genesius is everybody’s saint, not just the actor’s.

Each time I take on a new role as an actor, I begin the arduous process of leaving behind my familiar world in order to emerge onstage as someone else. The long hours of rehearsal are focused on one goal: to pretend my character into being.

A similar transformation takes place in the soul of every Christian. Jesus teaches that we must die in order to live, that we must be “born from above” (John 3:3). St. Paul tells us to strip off “the old self with its practices and [clothe] yourselves with the new self” (Col. 3:9-10), to “let the same mind be in you that was in Christ Jesus” (Phil. 2:5). The process of transformation for the person of faith is not unlike that of the actor. We pretend Christ into being.

In the story of Genesius, the two transformations merge: The character Genesius is pretending to be (the man being baptized) is one who has, in turn, put on—pretended—Christ. Acting the faith awakened faith in Genesius’ soul. I call this the Genesius Effect.

I experienced its power when I was cast in the one-man play Damien recounting the life of the leper priest of Molokai. Performing the role required me to identify with the deep faith that sustained the priest and motivated his selfless actions. Though he was surrounded by darkness—the leprosy that ravished the islands, the horror of the leper’s banishment, and the doubts that riddled his soul—he countered it with his beliefs that God loves each human being unconditionally, that life conquers death, and that we grow in holiness as we attend to the needs of others.

His was not a facile faith; his inner struggles were many. Through it all, he put on Christ, “acting his faith” in a performance that led to sainthood. By surrendering myself nightly to his profound vision, I was transformed by the faith that transformed him.

I left the theater with a heightened awareness of the plight of those around us who strain under conditions similar to those faced by the lepers: sickness, poverty, segregation, and isolation. Having walked in Damien’s shoes, I perceive the sacredness of their lives. I am challenged to touch them as Damien did—to affirm the dignity of their lives. When I do, I discover the dignity of my own.

Lope de Vega’s play about St. Genesius is aptly named Acting Is Believing. It draws attention to the fact that action and faith are inextricably connected. As we give ourselves away on behalf of others and counter the self-centered demands of the “old self” in us, we discover our new identity.