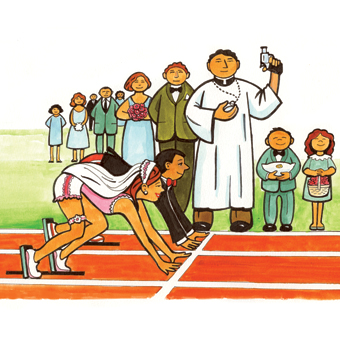 Waiting around to walk down the aisle may make your wedding vows harder to keep.

It was the end of my junior year of college, and I was considering marrying the woman of my dreams. My father questioned the wisdom of marrying so young (even though he was even younger when he married my mother), but I reassured him that we had come to deeply know and love each other over the last two years and that we wanted to go through life together, starting right away. I explained that we did not want to become “established” and then get married; we wanted to go through that adventure together.

We married the summer before my senior year with little money, a tiny apartment, and endless dreams of our future. Thirty years later, my wife and I are still thankful that we made the decision to grow up together through our 20s.

But my father’s apprehension in 1980 has become the trend of this new millennium. In fact, a recent Wall Street Journal article pointed out that some sociologists argue that “early marriage” is the No. 1 predictor of divorce. They encourage young adults to explore their identity, work, and love by delaying marriage and parenthood until their later 20s. They warn that those who fail to postpone these family transitions miss out on better career opportunities, make poorer choices on partners, and develop more marital problems.

Today the perception is that marriage takes more than it gives and brings a good chance of ending in divorce. It shouldn’t surprise anyone that the median age for one’s first marriage has shifted from the early 20s in 1980 (my decision was the norm at that time) to 28 for men and 26 for women today.

It seems intuitive that age would bring maturity, stability, and better decisions, which would result in more lasting marriages. However, there are a number of risks that work against these later marriages and question the wisdom of this social trend to delay marriage into your 30s.

The starting point is a reconsideration of the claim that early marriages contribute to higher rates of divorce. There was a study conducted in 2002 by Tim Heaton that did find high rates of marital instability associated with young marriages, but the risks were with teen marriages. The impact that age had on predicting marriage outcomes leveled off around age 21 with age making little difference for those who marry between 21 and 30.

Furthermore, there may actually be increased risks associated with delaying marriage to the end of your 20s or into your 30s. For instance, waiting to get married often leads to more premarital sex, premarital cohabitation, and premarital births, which are all associated with higher rates of marital instability. In addition, there is a smaller selection pool as you reach your early 30s (by age 30, 75 percent of the population are married). At that point, the chances of achieving a quality relationship lower because of the difficulty with finding a suitable partner

These risks are often overlooked because of a prevalent attitude today that is quite dangerous and misleading: What you experience in one relationship has no bearing on what will happen in a subsequent relationship. You could call this “relationship compartmentalization,” where each relationship occurs in its own compartment without any effect on another.

I like to refer to this attitude as “What happens in Vegas, stays in Vegas.” Obviously, this cannot be true because what occurs in relationships, no matter how insignificant, carries some measure of influence on you, the way you think, and what you take into your next relationship. As scripture says in what is both an encouragement and a warning, “You reap what you sow.”

A sobering example of this was found in the research on women by Jay Teachman from Western Washington University. He showed that premarital involvement with just one sexual partner other than the person a woman eventually married tripled the risk of divorce as compared with those who had only had sex with their husband.

These are just two examples from an extensive body of research that supports the continuity of relationship experiences. And yet these research findings seem to get lost on library shelves without reshaping the current practices in our dating culture.

Several researchers examining the attitudes toward first marriage of 800 young adults ages 19 through 26 use the term “marital horizon” to talk about what young adults think is the ideal age for getting married. They found that having a more distant marital horizon was directly related to more risky premarital beliefs and behaviors.

Today more than 65 percent of married couples say they cohabited before marriage. Yet there is no evidence that living together before marriage will improve the quality of your marriage or lower your odds of divorce. However, most do not realize that those who live together with just one partner other than the one they marry may increase their risk of divorce by 15 percent.

The point is that one’s attitude toward marriage during the dating years will affect relationship practices. And what happens in relationships today will affect any future marriage. For better or for worse, the principle that “you reap what you sow” holds true.

How can we support marriage and stop the rising age of marriage? Societal attitudes will have to change, but that starts with individuals deciding to date in ways that will honor their future spouse and marriage.

Reggie walked into my counseling office when he had just turned 23 years old. He was the personification of the current dating attitude that marriage was nowhere in sight and hooking up had no future consequences. However, the accumulation of his highly accelerated and sexually charged relationships had left him feeling empty and alone.

After several months of exploring his past relationship patterns he decided to delay sexual involvement until he married and to build more serious friendships and romantic relationships with his goal of having a fulfilling marriage on his horizon.

When we met again four years later, he had just become engaged to Renee and thought it would be good to meet together and make sure their relationship was ready for marriage.

In one of our sessions Renee asked me if I thought Reggie’s past would affect him in their marriage. In other words, was it too late for Reggie? I told them that we are creatures of habit and Reggie made changes in his romantic relationships that created new habits and patterns. He “sowed” four years of new habits that will reap better results in his future marriage than if he had continued his previous lifestyle to the edge of his relationship with Renee.

Romantic relationships before marriage should be enjoyed-but this can be done in ways that benefit a future marriage. There is hope, promised in scripture and backed by research, for both the Renees and Reggies in the world. But it takes a commitment to attitudes and behaviors beneficial to marriage long before the wedding bells ring.

1. Young adults should be searching for a spouse rather than dating around.

3. Young adults should establish themselves financially and otherwise before getting married.

Representative of “other”:
“You don’t need to be well-established, but you need to be able to pay for your lives together outside of your parents’ basement.”

4. Having many romantic relationships makes it harder to finally commit to one person.

5. The church does a good job at encouraging and supporting:

6. The ideal age to get married is:

7. As a single person, I worry about finding a spouse to whom I can commit for the rest of my life.

Results are based on survey responses from 222 USCatholic.org visitors.