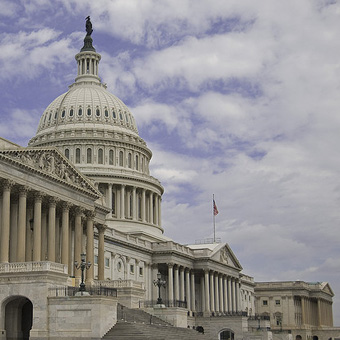 The politics of radical individualism threatens the common good.

The late philosopher and novelist Ayn Rand has long held an iconic place among libertarians who glorify unbridled markets and limited government. Once relegated to cult hero status among a relatively small coterie of devotees, Randian ideas have enjoyed a dramatic popular awakening in public life. Rand’s contempt for religion and compassion for the poor has not stopped many conservatives—including influential Catholic members of Congress—from adopting her as something of a patron saint of radical individualism, whose ideas inspire a policy agenda deeply hostile to Catholic teaching about the common good.

Rep. Paul Ryan, architect of the GOP budget proposal, credits Rand for inspiring him to enter politics and has said that Rand “more than anyone else did a fantastic job of explaining the morality of capitalism, the morality of individualism.” At a celebration of Rand’s legacy in 2005, the Catholic lawmaker from Wisconsin described legislative battles on Capitol Hill as “a fight that usually comes down to one conflict—individualism versus collectivism.”

Another prominent Catholic, House Speaker John Boehner, attended an exclusive screening of the film adaptation of Rand’s bestselling 1957 novel, Atlas Shrugged, which features entrepreneurial individualists set in stark caricature against meddling government bureaucrats. The Tea Party movement has embraced Rand as a fitting touchstone for anti-government fervor. “Do we believe in the individual, or do we believe in the state?”  Rand Paul, the new Tea Party-backed Senator from Kentucky, asked a raucous crowd on election night last November.

This renaissance of Rand and libertarian ideology has emerged against a sobering backdrop of high unemployment and contentious debate in Washington over the size and scope of government.  A $14.3 trillion national debt has seized the attention of both political parties. President Obama’s fiercest critics accuse him of adopting “European-style socialism” and cast achievements such as health care reform, the rescue of the auto industry, and modest regulation of the financial sector as intrusions on free market principles and individual liberty.

Emboldened by Tea Party demands to cut spending, Republican leaders have proposed a fundamental dismantling of the nation’s social safety net that would make Ayn Rand proud. Nutrition programs for mothers and infants would be slashed. Medicare and Medicaid, the crown jewels of Great Society legislation, would be privatized or turned into state block grants respectively. The Supplemental Nutrition Assistance Program (SNAP), formerly known as food stamps, would be significantly scaled back. Meanwhile, the wealthiest Americans and corporations would get more tax breaks.

Rep. Ryan, the chairman of the House budget committee, optimistically called this plan “A Roadmap for America’s Future.” But the bright future this vision imagines seems instead to look strangely backwards, evoking late 19th century Social Darwinism and a pre-New Deal America where the most vulnerable in society had few protections and big business faced little regulation. Ryan’s roadmap would have the poor rely largely on charitable organizations already stretched to the breaking point, or make due with a voucher in a volatile marketplace that has not been kind to even middle class Americans in recent years.

A Catholic Response to Radical Individualism

Catholics have a proud moral and intellectual tradition that provides a powerful antidote to this resurgent faith in radical individualism and anti-government ideology. In a world of cable news punditry defined by gotcha talking points, Catholic social teaching rejects either/or reductionism—think “big government” or the “free market”—that saves us from making false choices. The Catholic worldview stresses personal responsibility along with our collective obligation to care for the most vulnerable. Individual rights must be balanced with responsibility to our families, neighbors, country, and world. Government's vital role in serving the common good is complemented by the principle of subsidiarity, which recognizes that lower sectors of society (family, church, community organizations) serve as mediating institutions between the state and individual. Markets can help creative ideas flourish but should never be made an idol. Applying these sound principles to debates over government spending and the economy, Catholic leaders and laity are uniquely positioned to advocate for policies that demonstrate fiscal prudence without sacrificing values of basic fairness and solidarity.

Indeed, a Catholic vision of the common good has inspired seminal movements in American public life that is urgently needed again today. In 1919, the U.S. Catholic bishops released a “Program for Social Reconstruction,” a landmark document that called for what at the time were dramatic reforms: a minimum wage, public housing for workers, labor participation in management decisions, and insurance for the elderly, disabled, and unemployed.  Written by Msgr. John Ryan, a Catholic priest whose work on labor and social inequality was widely read in the decades following World War I, the bishops’ proposal and Msgr. Ryan’s rising star in Washington helped lay the groundwork for historic New Deal legislation in the following decades.

Catholic leaders and faith-based organizations are now defending this threatened legacy and leading the call for a moral economy. "A just framework for future budgets cannot rely on disproportionate cuts in essential services to poor persons," Bishop Howard J. Hubbard of Albany, New York and Bishop Stephen E. Blaire of Stockton, California wrote in an April letter to the House of Representatives. The chairmen of the U.S. Conference of Catholic Bishops’ domestic and international committees warned against “substantial cuts” to food and nutrition programs, affordable housing, and international development aid.

The bishops also joined evangelical and mainline Protestant leaders in a “Circle of Protection” campaign to urge lawmakers not to defund life-saving programs in the United States and abroad. NETWORK, a National Catholic Social Justice Lobby, and the New Evangelical Partnership for the Common Good, turned up the heat on lawmakers who tout their pro-life bona fides even as they propose policies that would harm the most vulnerable.

In a radio ad sponsored by the two organizations, a Catholic priest in Rep. Paul Ryan’s district says that the lawmaker’s proposal to balance the budget “undermines pro-life values” by hurting children, the poor, and the elderly. Days before House Speaker John Boehner gave the commencement address at The Catholic University of America in Washington, more than 70 professors at Catholic universities around the country challenged the speaker for supporting budget priorities that favor tax breaks for the rich over programs that help the most vulnerable.

The Political Distortion of Subsidiarity

In contrast, prominent Catholic conservatives argue that the concept of subsidiarity blesses a political agenda that demonizes government and venerates free-market solutions. George Weigel, an influential Catholic thinker at the Ethics and Public Policy Center in Washington, takes up this argument in his essay, “Catholic Social Thought and the 2012 Elections,” published in the journal First Things: “Because this statist misreading of Catholic social thought often flies under the flag of ‘Justice for the Poor,’ it’s important to underscore one crucial point as the 2012 debate unfolds, this year and next: Catholic social thought is about the empowerment of the poor. It is not about failed polices of social assistance that treat poor people as problems to be solved rather than as people with potential to be unleashed. It is not about using public policy to create generation after generation of serfs on the state welfare plantation.”

This is a distortion of subsidiarity that echoes GOP talking points more than it reflects the fullness of Catholic social teaching. Ronald Reagan created the pernicious myth of the Cadillac-driving “welfare queen.” Weigel warns about “generation after generation of serfs.” Using rhetorical excess tinged with racial subtext—“state welfare plantation”—Weigel proceeds to blow down his straw man.

The reality, of course, is more complicated. Wall Street recklessness and greed, unsustainable tax breaks that disproportionately benefit the rich, widespread deregulation of the financial sector, and the costs of two wars have more to do with our economic challenges today than Weigel’s bogeyman of big government dependency. (Weigel never warned about massive government spending in Iraq when he publicly championed a war condemned by Pope John Paul II and the U.S. bishops.)

If Catholic teaching on solidarity does not expect government to solve all societal ills, subsidiarity is not a free pass for those who would eviscerate government safety nets that save lives. The Compendium of the Social Doctrine of the Church notes that “the responsibility for attaining the common good, besides falling to individual persons, belongs also to the State, since the common good is the reason the political authority exists.”

While some conservatives are quick to reference Pope John Paul II’s warnings about the “social assistance state” in his encyclical Centesimus Annus, this admonition was largely a response to the entrenched centralization of a totalitarian Soviet regime rather than America’s social safety net. They also gloss over his words from the same encyclical that it is “urgent therefore to promote not only family policies, but also those social policies which have the family as their principle object, policies which assist the family by providing adequate resources and efficient means of support, both for bringing up children and looking after the elderly…” In his latest encyclical, Caritas in Veritate, Pope Benedict XVI makes it clear that subsidiarity alone is insufficient, emphasizing the principle of solidarity and the duty of government to provide for the welfare of citizens when non-governmental institutions are not up to the task.

The misuse of subsidiarity is not relegated to scholarly journals. In a letter to Archbishop Timothy Dolan, the president of the U.S. Conference of Catholic Bishops, Rep. Paul Ryan argued that his Medicare and Medicaid proposals reflect the Catholic principles of subsidiarity and a preferential option for the poor. Ryan specifically links subsidiarity with the American political tradition of “federalism,” writing that “both counsel that the states, as ‘subordinate organizations’ closer to the people can do better in applying funds to the neediest.” While Ryan sought to spin Archbishop Dolan’s pastoral response into a full-throated endorsement, the archbishop offered no such validation and countered by reminding Ryan that subsidiarity and solidarity must work together.

Political battles over the economy and government’s role in protecting the most vulnerable will only heat up as the 2012 election draws closer. Catholic voters will again be courted by both parties in key swing states. Will the politics of radical individualism championed by Ayn Rand’s disciples and the anti-government backlash stoked by the Tea Party movement be met with a compelling response? Catholics have a centuries-old tradition at their fingertips that may prove to be the answer.

John Gehring is a senior writer and Catholic outreach coordinator at Faith in Public Life in Washington.

Ask an Apostle: Should I give money to the homeless?