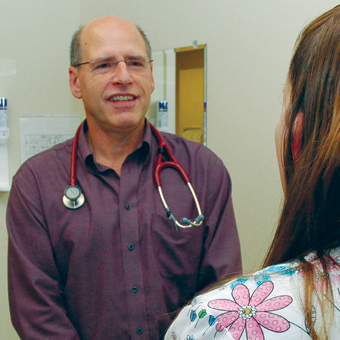 After the priest and the Levite have passed by an injured traveler, the Samaritan man is moved with compassion, providing first aid and then medical care for the stranger. The parable poignantly exemplifies the core tenet of our Catholic social teaching: the respect for human dignity. Sadly, the United States is alone among industrialized societies in its failure to recognize the fundamental right to health care that human dignity demands.

My medical practice is with Medicaid patients and the uninsured. More than policy arguments or statistics, the stories of my patients demonstrate the failure to treat the sick with dignity that characterizes our health care system.

John is a 65-year-old man whom I first met in the free clinic where I volunteer. Out of work and uninsured, he presented with a history of blood in the urine. He was in the classic demographic for bladder cancer. After explaining my concerns and exploring his options, he elected to roll the dice and wait six months for evaluation until he was eligible for Medicare.

He won that gamble, but months later, I saw his wife and daughter in the same clinic. Because he had started receiving a modest Social Security check, they were dropped from Medicaid. I remember vividly his anguish at moving one step forward and two steps backward in providing health insurance for his family

Or consider Karen’s case. After many years battling mental illness, she became stable enough with medication and regular therapy to consider working and found a minimum-wage job. She could hardly contain her joy at feeling productive and getting a paycheck.

A few months later, everything had changed. Because of her job, she was no longer eligible for Medicaid. She was unable to afford her medication and lost access to her mental health provider. Despite treatment with lower-cost medications, she has slipped back into overtly psychotic behavior. She clings stubbornly to her job as her health deteriorates. I have pleaded with her to quit her job, so that she qualifies for the insurance that may very well save her life.

Finally, meet Steve. At 45 years of age, he has already had every complication of diabetes, including heart surgery and an amputation. Disabled and without insurance coverage for his multiple medications, he has limited himself to eating once a day to be able to afford his medications. One day, trying to be helpful, I suggested he visit the local food bank to help with his budget. Becoming silent, then looking up to me with tears in his eyes, he said, “I can’t do that, Doc.”

What kind of a system forces people to gamble with their lives as John did? What other country would make Karen choose between health insurance and a job, or force Steve to choose between eating and paying for medications?

We still face many challenges in reforming our health care system: 46 million uninsured, millions of Americans one serious illness or injury away from bankruptcy, staggering disparities in health by race and income. A recent Harvard study suggests that 45,000 in this country die annually because of lack of insurance.

How will we respond to these challenges? Perhaps returning to our parable provides a guide to our moral obligation. After affirming that it is our duty to love our neighbors as we do ourselves, Jesus is asked “Who is my neighbor?” In response he relates the story of the Samaritan.

Despite the heated debate and numbing policy details, perhaps our challenge as Catholics can be stated quite simply. Will we advocate for a just health care system for all, or will we, like the priest and the Levite in our parable, cross the road and ignore the human dignity of John, Karen, Steve, and millions of our neighbors?

Michael Grady is a family physician and member of St. Paul’s Catholic Church in Silverton, Oregon.