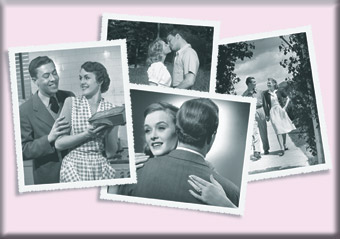 Natural Family Planning has come a long a way, baby. Not only does it meet the church’s moral standard for spacing births, it keeps a marriage going.

I met Mike while working as an engineer for an aerospace company. Mike was a test pilot just out of the Air Force. He swept me off my feet—literally—by taking me on flights. After one flight we lunched from a picnic basket he had packed. At the bottom of the basket was a small white box. I reached in, and Mike dropped to one knee.

Soon I was walking down the aisle, struck by a sense of embarking on a great adventure.

During marriage preparation our sponsor couple urged us to learn about Natural Family Planning (NFP). The wife, a nurse, spoke highly of its marital and health benefits.

Mike had grown up in an era of dissent from the church’s teaching on birth control. As “the pill” became widely available in the 1960s, many Catholic theologians argued that its use could be morally acceptable.

Pope Paul VI’s encyclical Humanae Vitae tried to reassert the traditional church teachings prohibiting artificial birth control. But like many Catholics, Mike was told he could use his conscience to guide him in the area of sexual morality. For much of his adult life, he had remained ignorant of the truth and beauty behind the Catholic Church’s teaching. Since I wasn’t raised with a strong religious background, it was easy for me to neglect it, too.

The witness of our sponsor couple convinced Mike to try it. I embraced it because it was church-approved. I also liked that, with the Couple-to-Couple League (CCL), we would learn about NFP as a couple, from a couple. It was not just up to me; we would learn and use the method together.

Our marriage preparation and spiritual journey revealed the church’s blueprint for sexuality. We wanted to honor the church, though at first we didn’t trust God completely with a family-planning system.

CCL teaches the sympto-thermal method, which determines a woman’s fertility by “reading” her cervical mucus and measuring her body temperature. The method is based on current research and is effective even if the woman has irregular cycles.

As engineers Mike and I appreciated the rock-solid scientific underpinnings of the method. Studies show that the sympto-thermal method of NFP is 99 percent effective, the same as the birth control pill.

In addition to church approval, Mike and I appreciate the health aspects of NFP. More people hold their food up to close scrutiny. Is it organic or natural? In the same spirit women who practice NFP do not ingest artificial hormones containing possibly toxic ingredients manufactured in an unknown pharmaceutical plant.

Persuaded by these religious, scientific, and health benefits, we decided to give NFP a try, and it worked. For the first two years of our marriage, Mike and I never used artificial contraception, and we never conceived.

Contrary to what you may expect of an NFP newlywed, I wasn’t ready to have babies. Becoming a mom scared me. I wanted to focus on my new life with Mike: traveling, pursuing professional dreams, and returning to a quiet house. Down the road, one or two kids would suffice.

Then Mike developed a health problem that threatened to end his flying career. It was scary and sobering, and in response we turned to daily Mass. In gratitude for Mike’s healing, we asked the Lord, “What do we need to do for you?” The answer, we believed, was to begin a family.

Just as surely as NFP can help postpone pregnancy, it can help achieve it. A recent study of fertile couples showed that 98 percent of couples achieved pregnancy within 12 months with fertility awareness by timing intercourse for the most fertile days of the woman’s cycle.

We were overjoyed to welcome a son, James Raynor, into the world. In a very real way, we learned to trust—sometimes taking leaps of faiths, other times little scootches.

Around Jimmy’s second birthday, Mike and I began trying to conceive again. My body and confidence as a new mom had recovered.

Mike and I were even teaching CCL classes—a huge testament to NFP. We are both shy. If you would’ve told me 10 years ago I would be discussing marital intimacy in front of a group of young adults, I would have laughed. Yet we found the urge to share NFP irresistible, as do the more than 1,100 couples who volunteer to promote or teach NFP through CCL.

Just as Mike and I were beginning to feel like baby-making experts, we were humbled: We could not conceive. The large house we had bought with visions of a growing family suddenly felt quiet and achingly empty.

During our three-year battle with infertility, we reviewed our NFP charts like never before. We sought out an NFP-trained family doctor and brought him our charts. He was grateful for the wealth of valuable information. Based on our charts and other tests, he was able to appraise my condition and correct my hormone levels.

Thanks to his expertise and God’s grace, Mike and I conceived John Paul three months after adopting our daughter, Mary, from Ukraine.

Many people view NFP parents as strange, in the subset of 10-children, super-devout, home-schooling families. NFP is the butt of plenty of jokes—many told by Catholics.

I am saddened by this widespread misunderstanding of NFP. Is it because of our neglect of Humanae Vitae, now 40 years old? Looking back, we can easily see how prophetic Pope Paul VI was in explaining how the use of contraception would lead to an increase in divorce, a loosening of sexual morality, and the objectification of people.

The cornerstone of Pope John Paul II’s papacy was to share with us what it means to be a human person. Central to this is God’s plan for marriage and sexuality, as explained in his theology of the body. It is profoundly beautiful and has allowed us to embrace the church’s teaching on sexual morality. It has changed my life in ways I never could have imagined, drawing our family into the heart of the church.

Because we time our sexual relations, Mike and I are able to closely cooperate with God in the sacred act of creation. We invite the Holy Spirit into the most intimate part of our marriage. The phrase “open to life” has taken on a profound meaning to us.

Practicing NFP has enhanced our marriage in practical ways. It has strengthened our communication tenfold. Discussing the inner workings of my body has made every other subject easy. We plan our family together consciously. If we didn’t practice NFP, it would be all too easy to shelf those big-picture discussions for another day.

The monthly abstinence to avoid pregnancy, 8 to 12 days for a healthy couple, is a turnoff to many couples. But no couple is impervious to abstinence, be it the mandate of illness, pregnancy, military deployments, career obligations, or other unforeseeable circumstances. We all must delay sexual gratification at times.

Pope John Paul II called the willingness to abstain “sexual self-mastery.” It puts our sexuality in the proper perspective and teaches us a virtue we need for a life-long marriage.

During those periods of abstinence early in our marriage, I cooked Mike’s favorite meals and treats. Mike would demonstrate his love in random acts: bringing me orange juice in bed, giving me a single red rose. We built wonderful habits of love that have sustained the romance in our marriage through our parenting years.

Looking back I can see that NFP has reshaped the architecture of my heart. Where there was once a small den, crowded with fears of motherhood, there is now a sunny, spacious family room. Today our house is blissfully loud and wildly blessed.

Ann Green is a volunteer teacher for the Couple-to-Couple League and a home-schooling stay-at-home mother of four in Indianapolis.