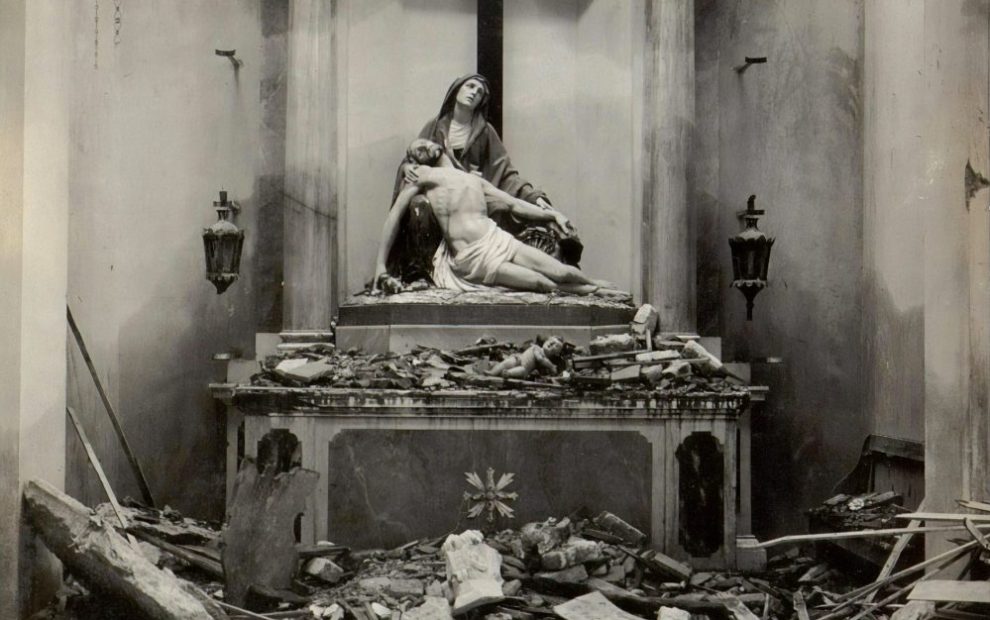 The term deconstruction was rarely heard in Catholic spaces until early 2021, when musician Audrey Assad tweeted that she hadn’t been a practicing Catholic for about three years. Assad also explained that she’s not really sure that it’s “over” and that “there are only curiosities [and] presence.” This former convert to Catholicism wasn’t coming out as an atheist. Rather, she was claiming space to explore perspectives about divine presence outside of Catholic orthodoxy and alternative spiritual practices to the Eucharist, which had been giving her panic attacks for years. Assad’s confession was quickly connected to the deconstruction movement that has arisen among ex-evangelicals in recent years. It spurred a number of counterarguments from Catholic commentators, while others identified with Assad’s sentiments and embraced the term.

In 2016 the Public Religion Research Institute (PRRI) found that 62 percent of Americans who left their childhood faith did so before age 18 and only 7 percent after age 30. It’s often assumed that people who stop practicing Catholicism as young adults simply don’t understand it well or never had a personal commitment. But the same year these data were published, majority-white churches embraced the political agenda of Donald Trump en masse, with 81 percent of white evangelicals and 60 percent of white Catholics voting for him. Many evangelicals and Catholics who did not vote for Trump felt this represented a deep betrayal and hypocrisy on the part of avowed Christ followers, leading more informed, practicing adults to start questioning the foundations of religious authority. The #exvangelical movement got rolling and along with it the trend of deep reexamination of foundational religious beliefs, or deconstruction.

Religious deconstruction is loosely associated with the deconstructionist philosophical movement, which was introduced by Jacques Derrida in the late 1960s. Derrida argued (among other things) that language has no fixed meaning. This poses a challenge to those Protestant Christians who believe the Bible is God’s inerrant and comprehensive instruction to humanity. More broadly, deconstructionism examines how society defines concepts such as justice and faith. It analyzes how hierarchy and power dynamics shape societal norms, enshrining in language and law the marginalization of certain ways of being and understanding. Applied to faith communities, this framework highlights ways religious leaders may use sources such as the Bible, tradition, and doctrine to enhance their power and disempower others.

More commonly today, deconstruction is understood as taking apart a structure of beliefs, like bricks that compose a church. Deconstructors reexamine their religion’s key assumptions and discard beliefs in anything that appears contradictory, harmful, or unsubstantiated by evidence.

Usually, this is done not out of academic curiosity but in response to being personally harmed, or seeing others harmed, by beliefs, practices, or members of faith groups. Some begin deconstruction after going to therapy and realizing their anxiety has roots in their religious beliefs. Others start when their marriage fails despite following traditional teachings on sexuality. Others witness their LGBTQ friends or family forming healthy relationships, or recognize their own queerness, and cannot support their church calling them “disordered” or worse.

In addition to biblical inerrancy, Christian beliefs that are sometimes discarded in deconstruction include original sin, eternal punishment, the necessity of Jesus’ death on the cross to atone for sin, and the supremacy of Christianity over other traditions. More denomination-specific beliefs may be challenged, ranging from young-Earth creationism and belief in rapture, to the authority of leaders or theologians, to teachings on gender and sexuality, abortion, discipline of children, the legacy of colonialism, and just war. Some topics of deconstruction unique to Catholics include the perpetual virginity or sinlessness of Mary, the authority of the magisterium, the nature of the real presence, the immorality of contraception, and the necessity of male priests ordained according to apostolic succession.

As the term deconstruction has risen, so have its critics. Some say it lends a false veneer of intellectualism to simple loss of belief. Others claim that deconstruction is motivated solely by sinful desires. Many deconstructors conclude that certain behaviors they were taught were sinful are not ethically problematic, that God has no anger or punishment in store for them, and that reason is not “corrupted by sinful nature.” To someone who still believes in classic Christian teachings on sin, this looks like excusing sinful behavior. Perhaps some deconstruction is motivated by wanting to engage in activities that are condemned—for Catholics this typically means sex outside of permanent, heterosexual marriage or the use of artificial contraceptives. But deconstructors usually say they’ve rejected these teachings because experiential evidence suggests that these “sins” do not cause harm or that labeling them as sins causes harm. Sophisticated deconstructors also point out how the definition of “sin” by religious authorities serves to maintain power structures of clergy over laypeople, men over women, and colonizers over non-Western cultural practices. Thus, arguments about sinful motivation end up in a circle of accusations between “you just want to justify sinning” and “you just want to define sin to unjustifiably control me.”

Most deconstructors don’t end up believing anything goes, however. It’s common for deconstructors to “reconstruct” or adopt a different philosophical framework around morality and ethics. They may continue to believe in the existence of God or a transcendent power as well as other foundational Christian doctrines such as the Trinity or Jesus’ divinity and resurrection.

Survey research provides some insight into shifting beliefs after deconstruction. The 2020 census of American religion from PRRI notes that affiliation among white Americans as “evangelical Protestant” declined from 23 percent in 2006 to 14.5 percent in 2020. Evangelical Protestantism is the category most associated with the idea that, if you don’t believe certain core doctrines, you aren’t “saved” and are in danger of eternal punishment. Affiliations as “white mainline (not evangelical) Protestant” and “white Catholic” also declined steadily from 2006 to 2020, though not as sharply. “Unaffiliated” Americans—also called the “Nones”—grew from 16 percent of the population in 2006 to 25.5 percent in 2018. However, atheists and agnostics each make up just 3 percent within this category. In other words, most of the Nones believe in God, but they don’t affiliate with an organized religion. The PRRI data also suggest that ex-evangelicals are shifting more into mainline Protestant churches, as this affiliation has begun to rise and the Nones have begun to reverse their growth trend. (Catholic affiliation has held steadier in the past several years.)

Changes in religious affiliation don’t capture the full extent of faith deconstruction. Some deconstructors feel that the cultural, communal, and spiritual nourishment aspects of their faith tradition are more important than particular doctrines. They continue to hold the same religious identity even while disagreeing with certain teachings. Some “pause” their religious practice while reevaluating their beliefs and values, but they don’t definitively reject their faith tradition. Some continue their religious practices but without the evangelical impulse to urge others to do the same.

If you have friends or family who talk about decon­structing, consider asking them what that means to them. Listen respectfully. Don’t assume their motivations or tell them that they risk going to hell; these tactics are sure to backfire. Keep in mind that religion is about belonging as much as if not more than believing. The more your loved one continues to feel respected and accepted by you and others in their original religion, the more likely they will find space for their beliefs within this faith tradition or something similar.

H. L. Norwich is a financial planner in the Washington, D.C. metro area. They are a graduate of the University of Virginia School of Law and practiced law and government relations, focused on tax and financial services, before transitioning to a career in financial advising.