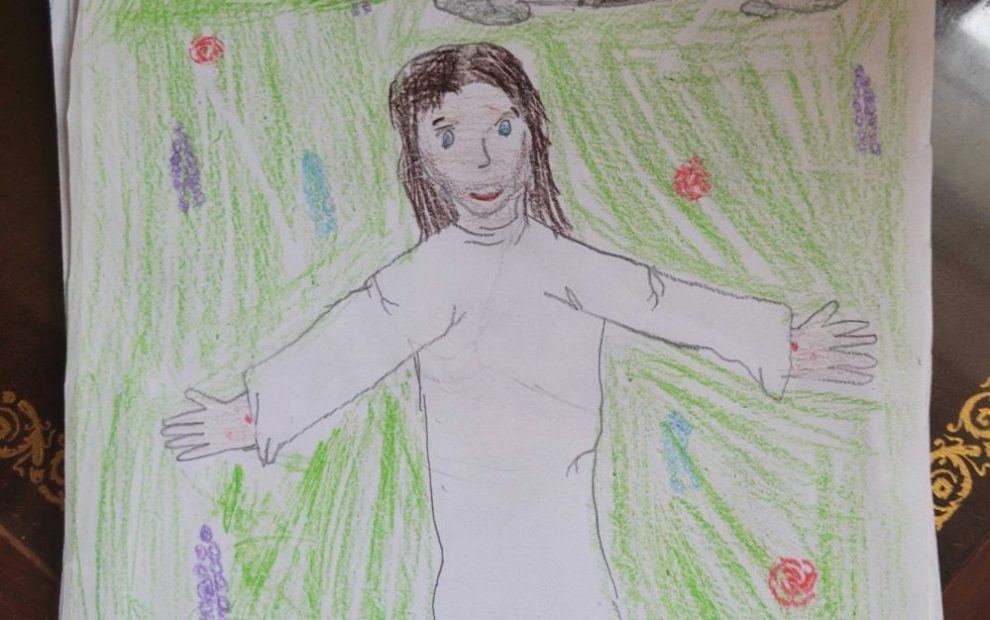 “Does Jesus pump the blood into my veins?” wondered my intrigued and somewhat confused 3-year-old after I explained that God incarnate lives in her heart.

Her quandary, informed by a recent interest in anatomy and the wonder that is a late-stage toddler’s somewhat logical and very curious mind, was a good one. It stemmed from my admittedly inadequate description of where Jesus spends his time, but what can I say? I panicked when she asked me if Jesus lives in the church. The last thing I want is to raise a child who believes that the sacred exists only in a sanctuary made of stone, yet, somehow, I had given her this idea. Moving from church to heart seemed like a positive transition.

It’s complicated to talk to children about Jesus’ life, death, resurrection, and continued presence in our lives because even to an adult the concepts can be baffling. After all, when discussing matters of faith, we often use the term mystery—which denotes things that are difficult or impossible to understand.

While my husband and I, along with our church community, have done our best to introduce my two young children to the person of Jesus—telling stories about his birth at Christmas, his death and resurrection at Easter, and his life and teachings in between—the details are clearly hazy.

As it turns out, I’m not the only person who has troubled their young child by telling them that Jesus lives in their heart.

“Waiiiitttt, whaaatttt?! How did he get in there? Is he coming out sometime? Is it going to hurt?!”

These are the questions that Anne McGowan’s 2½-year-old son threw at her when he, like my daughter, learned of Jesus’ presence in one of his vital organs.

“The idea did not connect with him,” McGowan says with a chuckle. “It was kind of disturbing to him.”

McGowan is an assistant professor of liturgy at Catholic Theological Union in Chicago where she teaches classes such as “Eucharist and Sacramental Theology” and “Preaching With Children” to seminarians and lay graduate students. She’s also a parent of young children and a second-grade catechist, so she has a wealth of personal and academic wisdom on guiding the faith formation of our church’s youngest members.

One of her key ideas is this: We—the adults aiming to teach—should consider talking a little bit less.

Young children understand, engage with, and enact the Christian faith on a very embodied level, through movement, song, and ritual, McGowan explains. “They’re not necessarily able to cognitively articulate a lot about the faith,” she says.

This is why much of the best learning about Jesus comes not from telling children about him—that he lives in their hearts or otherwise—but by giving them the opportunity to encounter Jesus, for instance, by taking them to Mass and allowing them to fully engage their senses in the hour of worship: to dip their hands in the holy water, get up close to the statues, and join in the singing, even if their shouts of praise sound differently from those of the rest of the crowd.

“I don’t want to discount what we tell them, but having experiential engagement is really important,” McGowan emphasizes. She isn’t alone in having this sense.

I spoke with religious educators—catechists, they’re called—from Epiphany Catholic School in Coon Rapids, Minnesota, who instruct children through the Catechesis of the Good Shepherd curriculum. Rooted in the educational principles of Maria Montessori, the Bible, and the liturgy of the church, the Catechesis of the Good Shepherd heavily leans on experiential engagement while introducing children to the stories of their faith.

“We give them things to do with their hands,” Mary Minor, the program coordinator, tells me. Wooden figures of sheep to be placed under the loving gaze of the Good Shepherd, sculpted apostles to circle around a Last Supper table, miniature cruets and linens to be arranged and used on a child-size altar: All these materials serve to tell the story of Jesus in a way that children can understand.

They do more than that as well.

“The aim of the atrium [classroom] is a place of prayer to have quietness and peace,” Minor says. Quietness, she and her cocatechists emphasize, leads to contemplation—even for children as young as toddlers—allowing them to know Jesus, to be in relationship with him, versus just being told about him.

But anyone who has worked with small children knows that quietness and peace can be elusive. The trick to achieving this desired end, the catechists share, is giving children tools to calm down.

“Once they are able to work with their hands, they calm their bodies, and then they are able to focus on other things,” Minor explains. “It’s a very gentle atmosphere, and we speak in low voices.”

The purpose of the program, then, isn’t to instruct children in facts about Jesus, God, or the church. Rather, it is to create a space in which they can encounter, discover, and “fall in love on their own,” as the curriculum’s motto phrases it. Sometimes that involves play and acting; sometimes it means lighting candles and engaging the senses; and sometimes, yes, it does include talking: telling stories and having discussions. But when talk does happen, it’s child-led.

“It’s inviting them into a conversation instead of information dumping,” Minor’s cocatechist Carly Radke explains.

Besides, many of the things we feel inclined to tell children about Jesus they already know. I asked Minor, who has years of experience working with young children, how they process hearing something like, “Jesus loves you,” and she was clear.

“I think they already know it,” she says. “We believe that God is in relationship with children already. We just have to provide an opportunity for that relationship to flourish.”

So how do we do that?

Finally, it’s worth remembering: As the liturgical year repeats itself year after year, we have time after time, season after season, to nurture the faith of our children. We don’t have to get this all right, all at once. What’s more, we aren’t alone in our efforts. As McGowan, comparing children’s faith formation to liturgy, puts it, “God shows up, we show up, and something happens.”