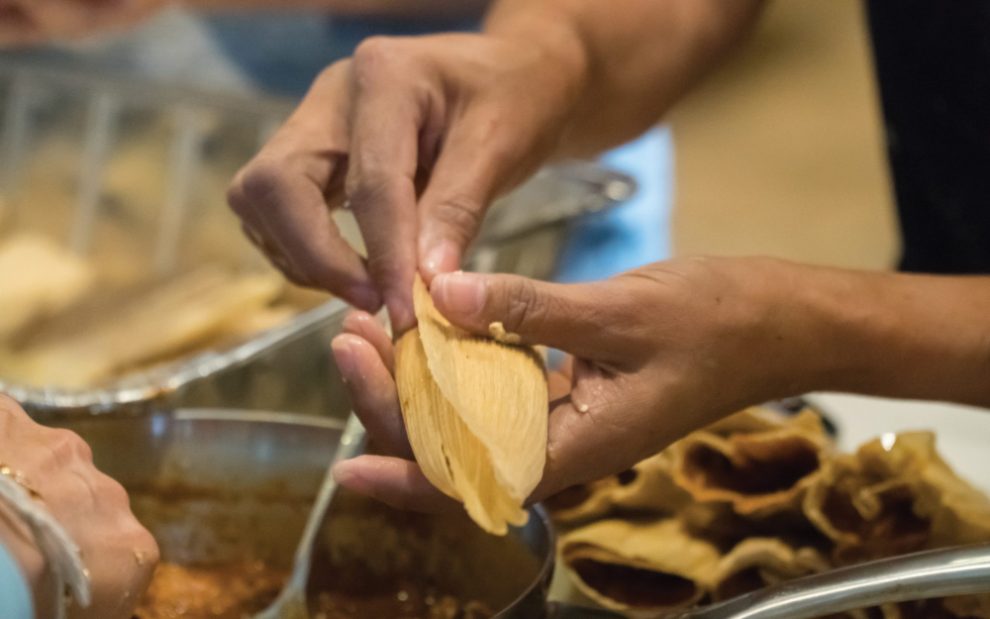 As soon as the temperature drops below 60 degrees in New York City, I know it’s almost time. The rest of the city dwellers begin to adorn their windows and fire escapes with pumpkins, cobwebs, and maybe even Christmas lights. Department stores declare holiday sale after holiday sale after holiday sale. The streets seem eager to welcome pilgrims from around the world for weeks of celebration in the city that never sleeps. But me? Only one thing is on my mind: tamales.

The temperature dropping might not evoke this same reaction for people of Mexican descent elsewhere in the country if they don’t live in a state with seasons (California and Texas, I’m looking at you). Having lived in both of those states, I can confirm this is true. But the sentiment remains. We all know when tamales season is near.

For those unfamiliar, a tamal (tamales in the plural) is a portable holiday dish synonymous with family gatherings. It is made out of masa harina (corn flour) that is thinly spread on two corn husks and filled with a variety of meats, cheeses, chiles, or fruits. Then it’s tightly wrapped and steamed to perfection. Many Latin American countries have their own version of this traditional Mesoamerican dish, sometimes substituting banana leaves for corn husks. Even in Mexico, the tamal varies depending on the region and is customized to each family’s liking. In my family, my tia’s tamales differ from my mom’s or my abuela’s.

But what makes tamales the most special is not the recipe per se. It’s what a tamal comes to signify for me: family, faith, tradition.

I am privileged to have grown up in a big and rather young family. My mom and dad were both 20 when I was born. My little brother came along when I was 7. My maternal grandparents lived right across the street from us for most of my childhood, and I had a plethora of aunts, uncles, and first, second, and third cousins who all lived within 15 minutes of our neighborhood. All this is to say: Family gatherings were a wonderful mess. Every other weekend or so we would gather at my grandma’s house to celebrate a birthday, baptism, first communion, or confirmation. Or to simply enjoy each other’s company. Around the time that my brother was born, my paternal grandparents moved in with us and joined the party. Life was full, and it only got better when Christmastime came along.

I remember waking up on Nochebuena (Christmas Eve) with anticipation in my belly and not just for the presents. All the women in the family (and sometimes my dad) would gather in the kitchen for the tamales-making marathon. The evening before, someone would run to the Mexican supermarket to buy the masa. Someone else was in charge of making the salsa verde filling (traditionally with pork), and my mom was in charge of making the salsa roja filling (traditionally with beef). We’d also throw in a mixture of strawberry and raisin fillings for the sweet tamales. Then we would assemble. Around the kitchen table we’d equip every person with a spoon or corn husks. We’d take turns spreading the masa, filling the tamal, or wrapping it up. Spread, fill, wrap. Spread, fill, wrap. We would work for hours until every last bit of masa was used. One of my grandmothers would prepare a steamer or two, and she’d pile in the tamales all cozy and snug for their steam bath.

But then the hardest part would begin—the waiting. My childhood mind remembers waiting an eternity for the tamales to steam, when in reality it only takes about an hour and a half. While we waited, we’d frantically work on some last-minute gift wrapping or finish areglandonos (getting ready). And as the sun would set and dinnertime would roll around, we’d feast on the fruits of our labor for the rest of the evening.

As I grew older, our family gatherings shrunk. My paternal grandparents eventually returned to Mexico, and our visits with them became few and far between. My immediate family and I left California for Texas, followed shortly by my mom’s parents and an aunt or two. Christmases looked a little different. Eventually, I moved away, first to college and then to Canada for my first job, and wasn’t able to visit home quite as often. The cold weather would begin to remind me of those cozy family gatherings from long ago.

When I’d meet other Mexicans or Mexican Americans who were far from home, first in Canada and then in New York, we would immediately bond over our love for tamales and our yearning for the family we’d left behind. “We should get together and make some tamales,” one friend would say. “We can learn how to make them together,” another would insist. Our desires for keeping this tradition alive—miles, states, or even countries from home—would prove not to be enough to overcome the busyness of life and social calendars. Our gatherings would never come to fruition.

As I write this, summer is winding down and the city shows subtle signs that winter is coming. I think of one of the last times my family gathered to make tamales before COVID-19 turned our world upside down. It was 2018. This time, I approached the table eager to perfect my tamale-making technique. My tias and I laughed and chatted, catching up on the past few months since my last visit. The cousins had grown up. Now they had kids of their own, who were the ones running around as the adults, which somehow included me, worked the assembly line. I watched attentively as my dad would lovingly correct me if I added too much carne or not enough chile. Growing up I struggled with the wrapping part, and I did not improve with age. But I listened and learned and documented every step, filing it away in my memory and on my camera. Maybe because one day it would be up to my generation to carry on our ritual when my parents and tias and abuelos are no longer around.

Mexican spirituality is very comunal. There is a reason why I haven’t gathered up all the ingredients to make tamales on my own. The arduous process doesn’t scare me. But making tamales without sharing the process with others would leave me empty, the antithesis of what it means to be Mexican and to celebrate the culture that gave me life and made me who I am.

This Christmas, I’ll think of all the family we’ve lost along the way. My Abuelito Heriberto who died of liver cancer in 2017. My Abuela Teresa who was taken suddenly at the height of the pandemic. And my Tio Juan who left us much too soon only a few months ago. We carry their love and memories when we come to the table to prepare the tamales. And whether I’m at home with my blood family or in New York with my chosen family, I’ll hold those memories and ponder them in my heart as we gather in love. Spread, fill, wrap. Spread, fill, wrap.

Vivian Cabrera is a writer and editor in New York. She attends the Graduate School of Social Service at Fordham University.