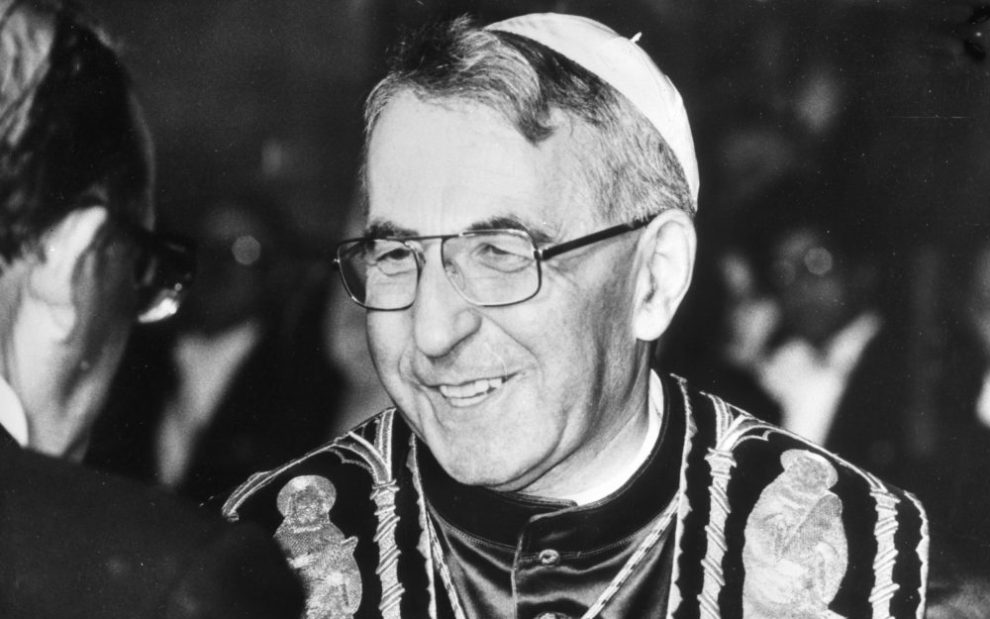 In August 1978, Cardinal Albino Luciani of Venice was elected the 263rd bishop of Rome, taking the name Pope John Paul I. Known as a warm and compassionate man who had a particular concern for the poor, he was quickly dubbed the “smiling pope.” He simplified papal ceremony by dropping the royal “we” in his public statements, declining coronation with the papal tiara, and discontinuing the use of the sedia gestatoria, the portable throne on which popes had been carried in public for more than a thousand years.

Barely a month later, he was dead.

On September 4 Pope John Paul I will be beatified, moving him one step closer to sainthood. Few Catholics under age 50 have any memory of him. Even older Catholics outside of Italy would be hard-pressed to remember more than the few facts mentioned above. His short papacy, however, continues to fascinate, because it allows Catholics to wonder where he would have led the church in those exciting and challenging years that followed the Second Vatican Council.

Luciani was born in 1912 in Forno di Canale, a mountain village about 90 miles north of Venice. His mother, Bortola, was a devout Catholic. His father, Giovanni, a bricklayer, was a socialist who distrusted the church. Nevertheless, when Luciani asked his father’s permission to enter the seminary, Giovanni relented. He only asked that as a priest his son take the part of the workers and the poor, “because that is what Christ did.”

Ordained in 1935, Luciani was assigned to his local parish in Forno di Canale. His superiors noted his gifts as a teacher and quickly made him an instructor of religion at a local school for mine workers. By 1937 he was teaching at the regional seminary in Belluno, where he also served as vice-rector. During this period, he completed his doctorate at the Pontifical Gregorian University in Rome.

His exposure to academic theology did not deprive him of his common touch. In 1949 he published a book, Catechetica in Briciole (Catechism in Crumbs), which he dedicated to his mother, his “first catechism teacher.” The book, which explains Catholic doctrine in simple terms, had been reprinted seven times by the time Luciani was elected pope.

In 1958 Angelo Giuseppe Roncalli, the patriarch of Venice, was elected pope, taking the name John XXIII. He named Luciani the bishop of Vittorio Veneto, a diocese south of Belluno. Surprised by the appointment, Luciani noted in his first homily as bishop that “with me the Lord uses again his old system. He takes the small ones from the mud of the streets. . . . He takes others away from their nets in the sea or the lake, and makes them apostles.” Luciani took the word humilitas (humility) as his episcopal motto. He became well known for dressing simply and visiting parishes and hospitals by bicycle or in an old car.

Luciani’s leadership was quickly tested. In early 1962 two priests informed him that they had been speculating in real estate and had lost hundreds of thousands of dollars. Luciani told the priests of his diocese that he would not follow the usual path of claiming clerical exemption from the law. “We must not hide behind any immunity,” he said. “In this scandal there is a lesson for us all. It is that we must be a poor church.”

St. Pope John XXIII convened the first session of the Second Vatican Council in 1962. Luciani attended all four sessions, which had a profound impact on him. Reflecting later on the contentious debate over religious liberty, Luciani recalled grappling with the church’s historic view that “error had no rights.” He noted that he had “studied the question in depth, and reached the conclusion that we had been wholly wrong.”

Luciani was among those bishops hoping for a similar development of doctrine on the question of artificial contraception. When Pope Paul VI foreclosed that possibility by issuing his encyclical Humanae Vitae (On the Regulation of Birth) in 1968, Luciani was clearly disappointed. In a pastoral letter to his diocese, he confessed that “in my heart, I hoped that the difficulties could be overcome.” At the same time, Luciani called for “sincere adhesion to the teaching of the Pope” and asked his priests to show “evangelical kindness” to couples who struggled with it.

Luciani’s combination of loyalty, orthodoxy, and pastoral sensitivity caught the attention of Pope Paul VI. When the patriarch of Venice died in 1969, the pope tapped Luciani to be his successor. True to form, Luciani rejected the traditional pomp associated with the installation of a new patriarch in favor of a simple ceremony of welcome.

The 1970s were not an easy time to be a Catholic bishop in Italy. Luciani’s priests in Venice were often swept up in movements for social change. Luciani willingly disciplined those whose public statements departed from church teaching. However, he often felt caught between those in the church who he saw as “stuck at Vatican I, if not actually at the Council of Trent” and those who “are planning a radical rush toward another council.”

Although seen by some as a conservative, Luciani remained committed to the poor and working class. When strikes occurred in his diocese, he occasionally tried to mediate but often ended up taking criticism from both employers and unions. At the 1971 Synod of Bishops, Luciani suggested that dioceses in rich countries tithe 1 percent of their income to Vatican charities working in the developing world. This should be given, he said, “not as alms, but as something that is owed . . . to compensate for the injustices that our consumer-oriented world is committing.”

“May God forgive you for what you have done.”

On August 6, 1978, Pope Paul VI died of a heart attack. The conclave to select his successor gathered in Vatican City on August 25. Most journalists covering the conclave did not see Luciani as a leading candidate, but voters quickly coalesced behind him. He secured the necessary two-thirds vote on the third ballot.

When the cardinals approached him to ask whether he accepted his election, a stunned Luciani replied, “May God forgive you for what you have done.” Then he smiled—the first of many papal smiles—and gave his consent. He chose the name John Paul I, the first double name in the 2,000-year papal history.

The new pope’s simplicity and humility quickly won the hearts of Catholics in Italy and around the world. Compared to his predecessors, he was easy and informal. During his audiences he would occasionally invite up children and converse with them. The Italian faithful, no doubt finding his full papal name a bit of a mouthful, shortened it to “Gianpaolo.”

In private, the pope’s words occasionally took on a graver cast. His personal secretary, Father John Magee, later recalled that he often talked about his death and his expectation that his papacy would be a short one. It was not merely morbid speculation, as the pope had been taking medication for cardiovascular disease since his days as the patriarch of Venice.

On September 28, after a busy day of meetings and telephone calls, the pope experienced multiple episodes of chest pain. He refused a physician’s help, insisting the pain would pass. By evening, he was in good spirits and offered his staff his usual benediction: “Good night! See you tomorrow, if God is willing.”

The next morning, the pope’s housekeeper, Sister Vincenza Taffarel, placed coffee on a tray outside his door. When she came back an hour later and found it untouched, she cautiously entered the room. There she found him in his bed, having died during the night.

The shock and confusion that followed fueled speculation that he had been poisoned by an ever shifting roster of shadowy opponents. The Vatican’s refusal of an autopsy no doubt added fuel to the fire. In the late 1970s, however, the death of a man with cardiovascular disease in his mid-60s was hardly unusual. As additional evidence about the pope’s health history has emerged, the conspiracy theories have fewer adherents.

The Vatican journalist John L. Allen Jr. once observed that the short papacy of Pope John Paul I has something in common with the short presidency of John F. Kennedy. Both allow us to ask the question, “What might have he accomplished had he lived?”

Catholics of a reformist bent suggest that, given his public statements while he was the patriarch of Venice, he might have taken a different approach to the question of artificial contraception than St. Pope John Paul II did. But to suggest that the immediate successor of Pope Paul VI would have simply overturned one of his most dramatic decisions is certainly unrealistic.

More conservative Catholics note his increasing willingness to criticize those who he felt were taking the church far beyond the vision of Vatican II. But nothing in Pope John Paul I’s makeup suggests that he would have had the iron will required to aggressively police the boundaries of orthodoxy in the manner of his successor.

One suspects that, like Pope Paul VI, he would have worked hard to hold the vital center of the church at a time when powerful forces seemed to be pulling it in different directions. Precisely for that reason, he would—also like Pope Paul VI—have disappointed those with greater certainty about the direction in which they wanted the church to move.

For half a century, we have become used to popes who are world leaders and global travelers. They articulate bold visions and offer wisdom to guide the journeys of both individual Catholics and the church as a whole. It is difficult to imagine the humble and relatively provincial Pope John Paul I fitting easily into this mold. If raising him to the altars is to be something more than one in a series of increasingly routine canonizations of recent popes, it may be a reminder that celebrity status is not the only model of the papacy. Nor, perhaps, is it the most healthy one.