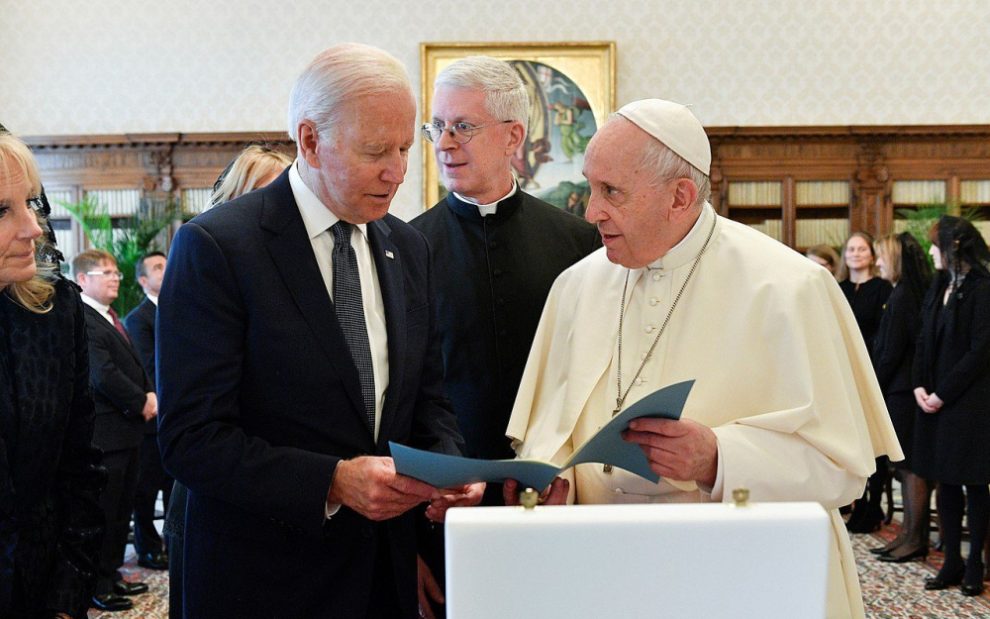 What should a post-COVID-19 world look like? Pope Francis has been thinking about this question for quite a long time—from very early on, in fact. Almost two years ago, he delivered a remarkable sequence of post-COVID-19 discourses, in which he laid out the principles needed to anchor global society and the global economy when the pandemic finally recedes. Shortly after that, in October 2020, he issued his prophetic encyclical Fratelli Tutti (On Fraternity and Social Friendship) under the clouds of virus-magnified tensions, anxieties, and dislocations.

The lessons of history tell us that pandemics tend to leave a deep mark, and not always for the better. Perhaps the most relevant historical comparison is with the Spanish flu of 1918 to 1920, almost exactly 100 years ago. With far less understanding of how viruses work, this pandemic proved devastating. It killed 50 million people worldwide, including 675,000 in the United States—about one in every 150 people, a far higher death rate than with COVID-19.

Carnage on such a scale was bound to have serious social and psychological consequences. And indeed it did.

The first point to note is that the Spanish flu was almost erased from history. Nobody talked about it, and everybody wanted to forget it. President Woodrow Wilson famously never even mentioned it in public. Part of this was strategic—he was concerned about keeping up morale during wartime. But part of it was a yearning for a great forgetting, a desire to relish the present and put away painful memories. The lesson seemed to be: If life is precarious, then life should be savored to the fullest. Thus, the first great pandemic of the modern era gave way to the Roaring Twenties.

This was a frothy economic period—consumption soared on the back of continued technological progress, especially electrification; consumer credit and stock prices rose dramatically; and the modern consumerist society made its debut. Income and wealth inequality reached record levels, not to be seen again until the present day. Political leaders were entranced by what they saw as the wonder-working power of free market capitalism.

This was also a period of societal flux, especially as people embraced a more socially liberal—perhaps even libertine—lifestyle. This was the era of jazz music, the emergence of mass entertainment in the form of radio and motion pictures, and the bawdy culture of speakeasies. It was a period epitomized by the bacchanal glamor narrated in The Great Gatsby.

As Financial Times columnist Martin Sandbu puts it, “One of history’s deadliest epidemics, following one of its deadliest armed conflicts, gave way to a decade that would be named for its economic abandon and social revolution—a decade of consumerism and frothy financial markets, of new music, art and fashion, of individual self-gratification and an embrace of freedom.”

All of this was understandable in light of the collective trauma the country had just gone through.

But there was an even darker side to the Roaring Twenties. The experience of a pandemic possibly made people more suspicious of one another. It is perhaps no coincidence that racism, xenophobia, and insularity all raised their ugly heads during this decade. The Ku Klux Klan—targeting Black people, Jews, Catholics, and immigrants—boasted millions of members. Racial violence and lynchings were commonplace. The Tulsa Race Massacre, one of the worst episodes of racist violence in modern history, took place in 1921, right on the heels of the Spanish flu. There was also an upswelling of anti-immigrant feeling. The Immigration Act of 1924 imposed some of the most draconian curbs on new entrants in history, banning all entrants from Asia and reducing immigration by 80 percent from the period before World War I.

What is striking about this period is how like today it looks—its debt-fueled consumption binge, its technological optimism, its staggering inequality, its glorification of the market, its cult of self-absorbed instant gratification, its myopia, and its xenophobia. The question for us is: Will we take a similar path after COVID-19, or will we make healthier choices? This was the question posed by Pope Francis back in 2020.

In Fratelli Tutti Pope Francis decries what he calls myopic, extremist, resentful, and aggressive nationalism; rising hyperbole, extremism, and polarization in politics; a fading of the spirit of multilateralism; a worrisome world of conflict and fear; a culture of walls, epitomized by a lack of welcome shown to migrants and refugees at the border; entrenched power of economic and financial interests that co-opt interdependence for its own gain; a mistreatment of nature; and a deification of the market, which leads to an economy of exclusion, a globalization of indifference, and a throwaway world. All of this is a far cry from what Fratelli Tutti calls for—an “open world” marked by fraternity and global solidarity.

How does the pandemic affect this diagnosis of current ills? Will it make it better or worse? For Pope Francis, the jury is still out. On the one hand, he notes, “The Covid-19 pandemic momentarily revived the sense that we are a global community, all in the same boat, where one person’s problems are the problems of all.” He notes that the pandemic made us realize that faith in the market was not enough to protect us. But he cautions that we need to heed the lessons of history. “Once this health crisis passes,” he notes, “our worst response would be to plunge even more deeply into feverish consumerism and new forms of egotistic self-preservation. God willing, after all this, we will think no longer in terms of ‘them’ and ‘those,’ but only ‘us.’ If only this may prove not to be just another tragedy of history from which we learned nothing.”

In his post-COVID-19 discourses, Pope Francis spells out what learning the lessons of history might look like. He appeals right away to some of the core principles of Catholic social teaching—principles such as the common good, the universal destination of goods, the preferential option for the poor, solidarity, subsidiarity, and care for our common home. Using the analogy of a virus, he argues that we need to build antibodies against the twin ills of indifference and individualism, whereby indifference means looking the other way, and individualism means looking only to one’s own interest, heedless of the well-being of others. Keeping up this analogy, he calls COVID-19 a “small but terrible virus” but also draws attention to a “larger virus,” identified with social injustice, inequality, marginalization, and environmental devastation. His bottom line is that we will either come out of it better or come out of it worse. But, he insists, “we must come out of it better, to counter social injustice and environmental damage. Today we have an opportunity to build something different.”

A century ago, we also had an opportunity to build something different. The world had just come out of a devastating war and a calamitous pandemic. But our forebears failed to make the wise choice. Can we choose a better path this time? The answer to that question might lie in whether or not we take seriously the principles of Catholic social teaching.

Image: Office of the President of the United States (Public domain)

Anthony Annett is a senior advisor at the Sustainable Development Solutions Network and an adjunct professor at Fordham University. Prior to this, he spent two decades at the International Monetary Fund. He holds a PhD in economics from Columbia University. He is the author of Cathonomics: How Catholic Tradition Can Create a More Just Economy (Georgetown University Press, 2022).