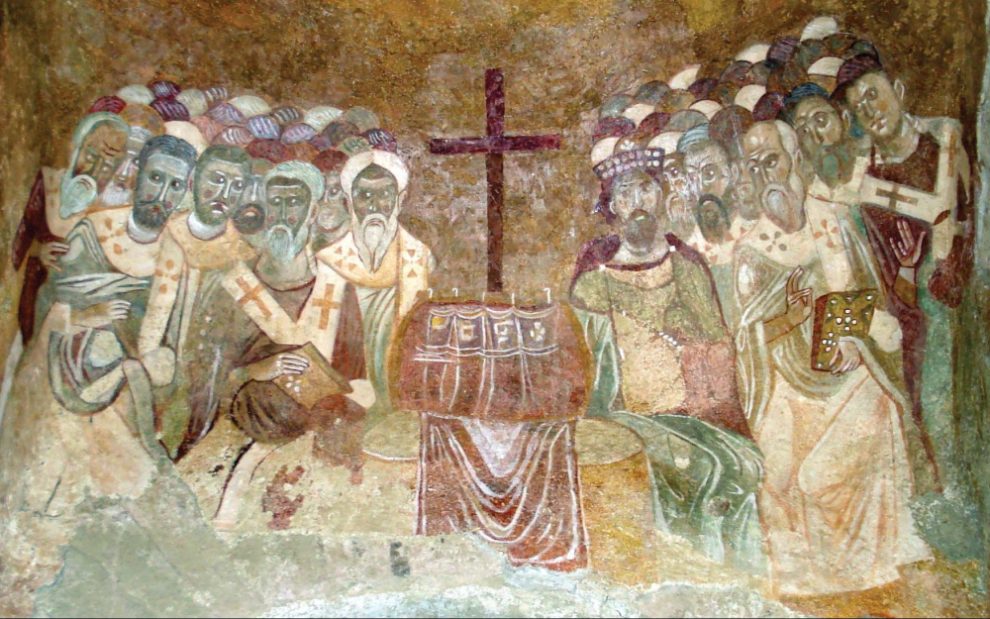 For too long you and I have said, “I’m a Catholic,” as if to identify a club membership. Worse, we may have implied that we belong to the right church, over and against inferior brands. Perhaps we’re finally ready for a genuinely catholic moment—not one featuring the “Church Triumphant,” but rather an incarnation of catholicity as originally intended by the folks who adopted the term. This requires a dive into history, so please prepare for some input from ODBs (old dead bishops). We’ll emerge somewhere very modern and very relevant by the end, I promise.

As a church descriptor, catholic enters the conversation early. The word first appears in a letter attributed to St. Bishop Ignatius of Antioch. Ignatius composes this letter on the way to his martyrdom around 107 C.E. “Let no one do anything of concern to the Church without the bishop,” Ignatius writes to the faithful at Smyrna—who were apparently as confused as we are in our day about whose information to trust. “Wherever the bishop appears, let the people be there; just as wherever Jesus Christ is, there is the Catholic Church” (italics mine).

Ignatius may seem to be throwing around the weight of his office, but remember, he’s on a death march and knows it. He’s actually defending a gospel-driven church to his survivors. Jesus mandates that his friends “go therefore and make disciples of all nations” (Matt. 28:19). This makes catholicity (that is, universality) our reason for being.

Yet Jesus is hardly ascended before the fighting starts. In St. Paul’s day (40s–60s C.E.), this unified-and-everywhere church quickly finds itself competing with local leaders more in communion with blooming heresies. Ignatius declares that Christ’s presence makes the church a true representation of his body. The bishop authenticates and preserves this unity, so look to the bishop.

Polycarp, bishop of Smyrna, meets Ignatius before going to his own martyrdom in 155 C.E. Polycarp likewise identifies as a leader of the “Catholic Church.” The term fast distinguishes who is in harmony with the universal community.

Getting everyone literally on the same page is the aim of a fragmentary document from 177 C.E. known as the Muratorian Canon. It seeks to standardize (canonize) which texts should be deemed sacred. “The Catholic Church,” says the canon, accepts as valid Paul’s letters to Philemon, Titus, and Timothy as well as the letters of Jude and John. The Muratorian Canon rejects other compositions that “cannot be received by the Church, for it is not suitable that gall be mixed with honey.”

Catholicity as a defining element of church catches on. Theologian Tertullian speaks of the “doctrine of the Catholic Church” when composing an argument against heretics in 200 C.E. These heretics were originally among the faithful, Tertullian notes, until “their ever restless curiosity” led them to “infect” others with unsound teachings. Tertullian names in particular a priest, Marcion, who’s also called out by the Muratorian Canon. Marcion taught that all sacred texts of the Jews spoke of a false and evil God. Marcion rejected what we know as the entire Hebrew scriptures and most of our present Christian scriptures, retaining only the Gospel of Luke and 10 letters of Paul. But Marcion was too much for those who would be Catholic, and he was expelled from the community.

By the third century, a line is drawn between the church called Catholic and any variant brand. The bishops patrol this line. In 253 Bishop Cyprian of Carthage insists that anyone who breaks with the local bishop is not in the church: “For the Church, which is one and catholic, is not split or divided, but is indeed united and joined by the cement of priests who adhere to one another.”

In the fourth century, it’s not just a “cement of priests” but whole councils embracing catholicity. The first Council of Nicaea in 325 declares anathema (that is, formally excommunicated) by the Catholic Church those who teach that Jesus is anything less than the eternally existing Son of God. Also, any clergy who refuse to welcome back those who renounce the faith under threat of persecution could themselves be welcomed back if they accept the church’s more compassionate response. These conciliar statements affirm that solidarity with the leadership is now routinely what’s meant by catholicity.

Leave it to Bishop Cyril of Jerusalem to define the essence of catholicity in 350 C.E.: “[The Church] is called catholic, then, because it extends over the whole world, from end to end of the earth, and because it teaches universally and infallibly each and every doctrine which must come to the knowledge of men, concerning things visible and invisible.”

Yet to Cyril, universality is more than blanket teaching authority. The church’s catholicity also implies a welcome to “every race of men [sic],” “governors and governed, learned and unlearned.”

The ethic of inclusion, then, is an element of Catholic identity—and not a small one. As Cyril insists, a truly catholic church “treats and heals every class of sins, those committed with the soul and those with the body, and it possesses within itself every conceivable form of virtue, in deeds and in words and in the spiritual gifts of every description.”

Wow! This is a much bigger definition of catholicity than we normally suppose. To Cyril, the church is catholic because (1) its mission is worldwide, (2) its teaching is comprehensive, (3) it welcomes everybody and anybody, (4) it heals all sin, and (5) it contains and expresses all virtue.

Cyril ends his teaching by advising travelers not simply to look for “houses of the Lord” or “the Church” but to inquire “where is the Catholic Church?” When you want a Coke, don’t settle for RC Cola.

It’s a short hop from Cyril to the Apostles’ Creed of 360 C.E., the first version to include “catholic” in its concluding line: “I believe in the Holy Spirit, the holy catholic Church.” The Nicene Creed of 381 C.E. contains the now familiar four marks of the church: “I believe . . . in one, holy, catholic, and apostolic Church.” St. Augustine, in the late fourth century, claims that even rival teachers themselves don’t claim to be catholic but instead point to the authoritative church for that.

At present we’re witnessing a national weariness with division and an equally intense global yearning for community. The pandemic revealed our common stakes, to be sure. But climate change even more urgently requires that we take comprehensive and united action to save our planet’s viability. The abrupt hostilities against Ukraine roused a unity of purpose seldom seem in international affairs. The ongoing Synod on Synodality invites us to join our voices together in a rare communal papal audience. In March Pope Francis’ summons to all bishops to participate in a worldwide consecration of Ukraine and Russia on the feast of the Annunciation was a Catholic moment breathtaking in its audacious scope.

It is time to embrace the Catholic vision for all it’s worth. Our mission is worldwide. Our teaching really does touch everything. We need to concentrate harder on our universal welcome. And we can do that, since we have the balm that heals all sin. Most of all, we need to get busy expressing every virtue in a world that could use a whole lot more of that. This is the Catholic moment the universe is waiting for