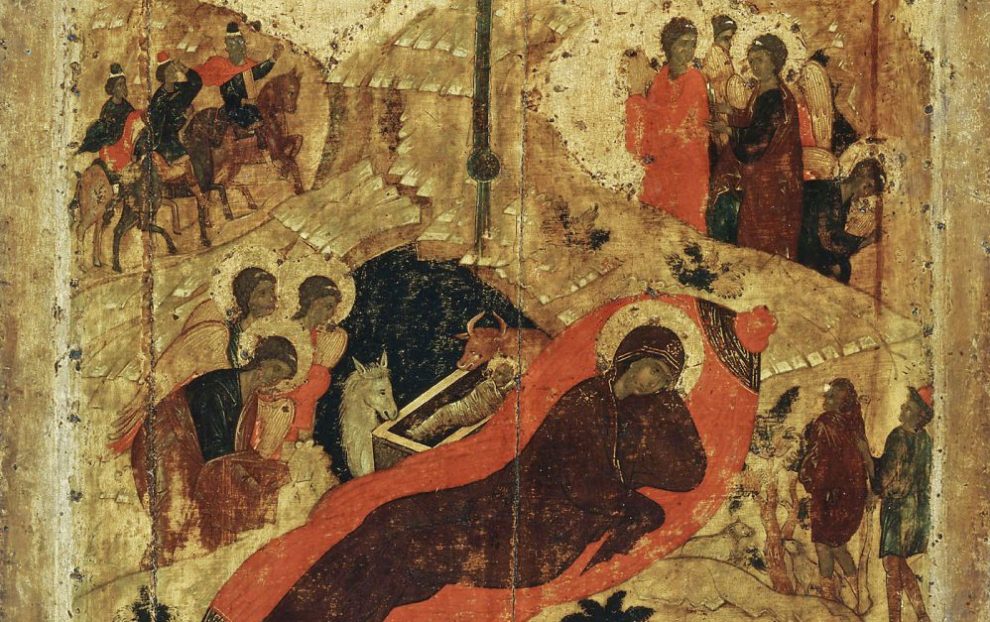 During the first Christmas of the pandemic, I discovered a little-known nativity meditation penned by Jean Paul Sartre while he was a German prisoner of war in 1942.* The text, generously written for the benefit of the other prisoners, included this sentence: “For God exploded like a bomb in the intimacy of this family.”

For context, consider the depictions of Jesus, Mary, and Joseph in the old Russian and Greek Nativity icons:

The son of God, just born, is already in his grave. It is on purpose that the manger resembles a small tomb and the swaddling clothes, the cloth that he would be buried in following his crucifixion.

The mother of God, having eclipsed the Mommy-isms of smiling and cooing, stares off—into the future? the eschaton?—with her back to the child. St. Joseph, confined to a corner, is engaged by the devil in conversation.

Coincidentally, it is Joseph with whom Sartre is most concerned in his brief remarks: “Joseph and Mary are forever separated by this fire of clarity, and Joseph’s whole life, I imagine, will be learning to accept.”

So, we are not merry; we are somber in the face of this life-altering moment that brings the dark before it reveals the light. How perceptive is Sartre, the atheist, to see exactly what the old icon painters saw and what Western greeting card manufacturers insist on clouding with sentimentality—the sheer awe of the moment, as in the old English word for awful, agheful, meaning to inspire respect, awe, fear.

But there is something else. Surely the bomb going off refers not only to the nativity but also to Mary’s pregnancy. And surely an ironic counterpart is suggested. For unlike Mary, a woman facing a pregnancy she has not wished for and is not prepared to carry also experiences a kind of bomb going off in her body.

Sartre himself hints at such things when he observes that all mothers, even happy ones—even the mother of God—at some point feel “exiled in the face of this new life that was made with their life.”

It is precisely this displacement from self, the shattering of control over one’s own agency in the making “of this new life” that makes a crisis pregnancy a moral dilemma. Because the reasons women get abortions have little to do with pure selfishness: I don’t want this child. (In fact, most abortion seekers are parents.) Instead, the reasons are entangled with the people and life tasks a woman has already committed to. As one study that explored the motivation for getting an abortion put it, “themes of responsibility to others” predominate.

In the United States some disturbing realities darken these themes: inequality in health care, including prenatal care; the absence of government-mandated paid parental leave; the challenge of securing housing and raising children on a minimum wage when childcare claims between 25 to 40 percent of every paycheck. Such pressure can shatter lives.

For another 6 to 8 percent of women, pregnancy poses life-threatening complications. In 2012 Savita Halappanavar, a dentist in Ireland, died from septicemia after she was refused an abortion at a Catholic hospital when she began to miscarry with complications. In 2022, in Poland, two women died under similar circumstances—the result of a new and stringent abortion law. The American College of Obstetricians and Gynecologists and Physicians for Reproductive Health recently reminded Americans that “there are situations where pregnancy termination in the form of an abortion is the only medical intervention that can preserve a patient’s health or save their life.”

Now that the Supreme Court has overturned Roe v. Wade, perhaps it is time to recognize that any argument for the sanctity of one life sets off an explosion nearby. If the U.S. Catholic bishops are actually serious about saying that no woman should have to choose between “her future” and not getting an abortion, they should start by acknowledging the bomb before taking up the long list of heavy-lift alternatives (see above) they will be stuck defending for years to come.

I don’t mean to suggest that the alternatives are not worth defending; they are. But the challenge is broad implementation, because no one solution can withstand the force of that explosion. I am more concerned about the failure to recognize that for abortions to become unnecessary, either the conditions of life would have to change radically, or the righteousness of the pro-life position would have to be accepted by everyone. So far, statistics do not favor either outcome.

One archbishop recently summed up a woman’s abortion alternatives as birth, adoption, or marriage—as though each was entirely self-evident. But this is not the case. And it is what each woman knows in her gut as she peers into the future. No one can help her into these options if she doesn’t already think they have a fighting chance. All of them might be wrong or unworkable.

For this is her crisis in a way that can never be her partner’s. Here too, Sartre understands something. Reflecting on how he would arrange the nativity scene, he comments: “And Jose? José, I wouldn’t paint it. It would only show a shadow at the bottom of the farm and two bright eyes. For I don’t know what to say about Joseph and Joseph doesn’t know what to say about himself.” Surely many men can identify.

Of course, for many religious conservatives, pregnancy is regarded as inevitable—natural and good—and motherhood as the highest calling of women. But in the 21st century, the decision to bear children in the Western world has become deeply personal, and many of the old sexual myths have been exposed.

I spent 10 years in the right-to-life movement, starting when I was a teenager. In the beginning, I naively assumed that people had sex because they wanted to. (This was back when “coercion” wasn’t a thing and rape was an event, not a culture.) I bought the myths, widely circulated by U.S. pro-life movement, that rape rarely results in conception and that abortion to save a mother’s life is a non-issue. I thought adoption was a logical and wonderful alternative to abortion until I adopted my own daughter and came face-to-face with what it means to lose your parents and your entire ancestry. I never did accept that more and better contraception would lead to more abortion, but some did and still do. They have been proved wrong.

You see, all these claims were just more end runs around the bomb.

Today, alternatives to abortion strike me as sensible when they are offered to women who are open to them and who are not endangered by pregnancy. For the rest, there is nothing. And by that, I mean no argument. No argument has been marshaled at this stage in history to stop a woman from seeking an abortion when she believes her life will be obliterated by a pregnancy. The right-to-life movement should make its peace with this fact, because laws will not stop anyone. Still, admitting that every abortion takes a human life would also remind us that the struggle is not over.

As we all watch what happens in the upcoming weeks and months following the reversal of Roe v. Wade, let us remember Sartre’s ability to pierce our understanding so that something familiar shakes us to the core. Before we say anything, celebrate anything, explain anything, deride anything, consider how the situation might change if we listened for the explosion. And then listened some more.

Image: Wikimedia Commons/Andrei Rublev, The Nativity of the Lord

Jessica Pegis is a writer living in Toronto, and the author of The God Painter, published by Stone Table Books, an imprint of Wipf and Stock.