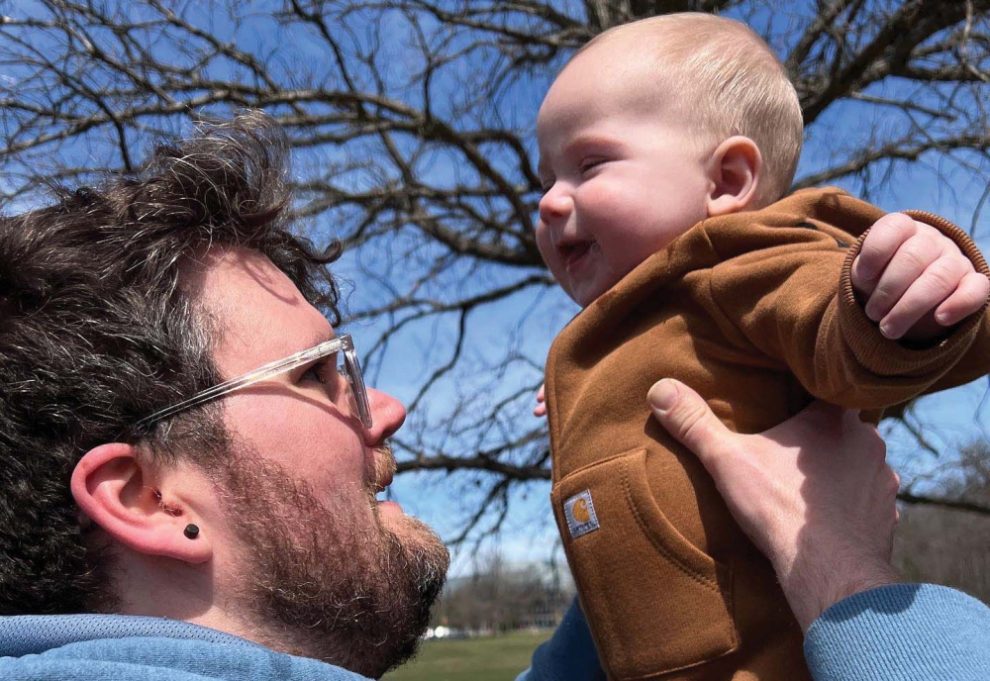 My favorite photo of my husband and son was taken in the early hazy days of parenthood when the latter was about 2 weeks old. It’s not a very good photo by many measures: It’s blurry and a bit off-center, as if I were half asleep when I took it. (Let’s be honest, I probably was.)

My son, Robin, is staring up at my husband with a look that can only be described as fierce. “Who are you, and what am I doing here?” he seems to be asking. My husband, meanwhile, looks disheveled and exhausted and is wearing a sleep mask pushed up on his forehead. He’s gazing at Robin with a mixture of frustration (“Why are you awake again?!”) and wonder at this small creature who arrived seemingly out of the blue to upend our lives.

Despite the shortcomings of the composition and the unkempt nature of the subjects and their surroundings, I love this photo for how it shows my husband being thrust into a new identity. Almost half a year after that picture was taken, seeing him grow into a father has given me a new perspective on parenthood, our relationship, and our family, but it has also changed how I think about God as father.

From the time I was a small child, the image of God the father didn’t sit right with me. This was a God who created the world and then went up to heaven, only coming back to exact discipline or set his people straight. This was a father who was willing to sacrifice individuals, entire communities, and even his own child.

This image of a father seemed to have little to do with my own experience of dads. What did this frightening father God have in common with my dad, who let me jump up and down on his stomach when I was a toddler? Or who would pick me up from school unexpectedly to go get ice cream? Or who would decide at the drop of a dime that we were going on vacation, load up the car, and drive until we found a hotel with open rooms?

It wasn’t until I was in college that I realized other people also took issue with this image of God the father. In my theology classes, I quickly stopped using “he” for God altogether, exploring what it meant to think of a female God or a God beyond all genders. I saw no reason to preserve the old image of God the father at all.

Instead of an absentee father who is off in some heavenly office all day, arriving home only to keep his kids in line, God the father is the exhausted new parent, staring in wonder at his child. God is the husband who gets up every morning at 5 with the baby so that his wife can get some sleep after doing the nighttime feedings and who does the majority of the cooking and cleaning. God is the father who dances around the house blaring music when Nirvana is the only thing that will calm his newborn down. (And yes, my husband has done all of these things over the past six months.)

I’m still just as adamant as I ever was that God is beyond all genders and that using any single pronoun for the divine is harmful and limiting. But instead of throwing out the metaphor of God the father, it’s time to throw out our old images of fathers. And perhaps inspiration for new fatherly roles is as close as your family photo album.