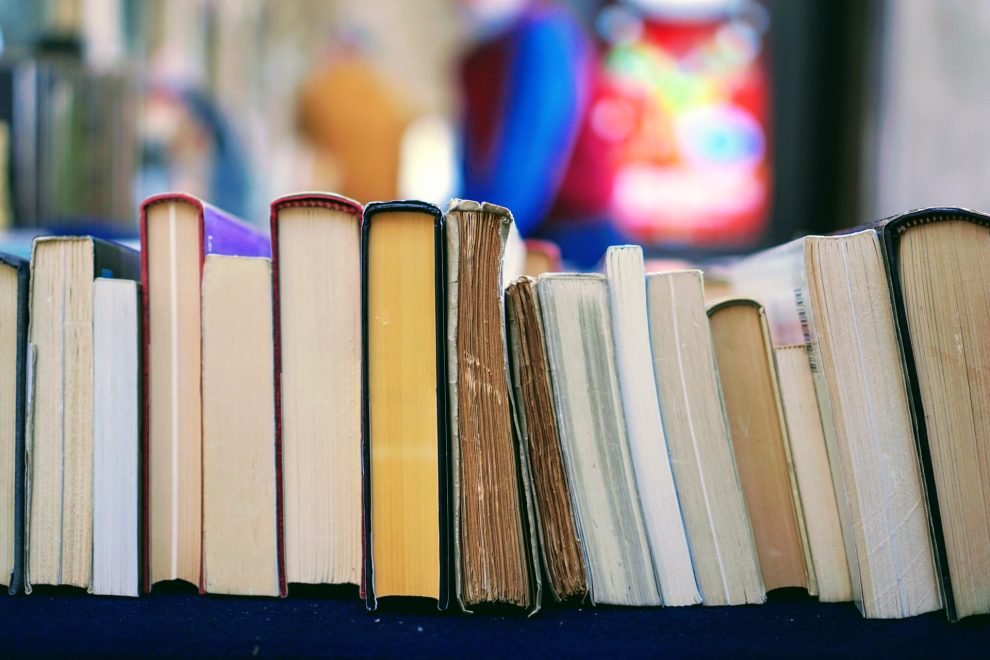 The collection and hoarding of bits and pieces is basic to all animals, from the squirrel with his nuts . . . to the anthologist with his oddments stored up in his memory.

—Elizabeth Goudge, A Book of Comfort: An Anthology

I am sitting in a church basement, surrounded by the remnants of a man’s life, the 250 cartons of books he abandoned when he crossed the bar. An academic antiquarian library has skimmed off an additional 50.

The collecting had gotten out of hand—three copies of Saint-Watching by Phyllis McGinley and four of the oddball Boxelder Bug Variations by Bill Holm. The books are uncategorized, an art museum catalog next to a hymnbook next to a Shūsaku Endō novel alongside a Wendell Berry rumination then a William Morris biography nestled against a calligraphy instruction manual. I’ve pulled out a hundred lavishly illustrated children’s books. Bought for whom? There were no younguns in his sphere.

Analyzing the good life, psychologist Steven Reiss categorizes two driving forces behind basic human pleasures: (1) ends that satisfy in and of themselves, and (2) secondary means to other satisfactions. End motivations include intangibles, such as independence, honor, curiosity, and tranquility, as well as the concrete action of saving—as in collecting things. So mundane and temporal. Who would have thought?

David, my departed friend, had other passels of things not yet revealed: icons, crèches, crosses, and upscale bibelots minus a few he had selectively presented as hostess gifts. The shopping and ordering, the book or box opening, must have filled a void for the solitary man, a government bureaucrat by day, a church musician on the side. He enjoyed the find, the having and holding. I once boldly asked him if I could keep a book he’d lent me. He said no, though I’m sure he never again opened it—and it’s now mine, rescued just this morning from one of his abandoned boxes. Searching for irony, I think of Plum Johnson’s family memoir published a few years back: They Left Us Everything.

For decades book publishing provided my livelihood. I’ve edited, marketed, written books. And now this, a hard leap—giving them away. I’ve organized a modest publicity campaign. Donations accepted but not required. I’m here at the church waiting for takers. Waiting for David’s acquaintances or strangers to come on by, to pick up and take home a piece of his life. So far, only a handful of browsers have embraced the enjoyable endgame opportunity.

As for items collected as a means to an end, I’ve asked around: What do people collect and why that in particular? Items seem to fall into three groups: Things that interest them, like books and the wonders under their covers. Things they hope will increase in value, like porcelains and rare coins. And things they don’t want to run out of.

The third category aligns with my own experience. When my siblings and I cleaned out our parents’ home, I dismantled the pantry: home-canned goods to feed a hundred and two full freezers more. Life nutrients aside, I hear of other cannot-live-without collections: a clean-shaven grandfather who stacked a 10-year supply of razor blades, hedging against a steel shortage. Candles, lamp oil, and wicks to outlast Abraham Lincoln’s winter reading. Toilet paper to wipe a dynasty. Liquid soap. Tylenol. Garden seeds. Roof rakes.

In a discussion on the seven deadly sins, William S. Stafford quipped, “Ownership did not interest Jesus.” This seems evident in his gospel line, “Whoever has two coats must share with anyone who has none” (Luke 3:11).

God, forgive me. In my downstairs closet I have 15 coats and eight jackets. I hate being cold. I don’t want to freeze to death. Few of these wraps are new to me, which is to say I purchased one and then another at a consignment shop, or I could not say no to a friend or sister who wanted to bestow one more upon me. It was a new color or style or length. It fit tolerably well. “Can you use it?” Yes. With each new acquisition I should be able to discard—pass along to someone else—an older outer garment. But no. I might need it someday. Duly warned—“pray that your flight may not be in winter” (Matt. 24:20)—I fear the prospect of shivering through the great Ordeal at the end of time.

From David’s cache of books, I’ve plucked a set of 30 postcard-sized booklets, each featuring snippets from “devotional classics”—Augustine of Hippo, Bernard of Clairvaux, Dietrich Bonhoeffer, John Bunyan, Francis of Assisi, Julian of Norwich, Søren Kierkegaard, Brother Lawrence, John Wesley. I would guess they’d been in David’s possession for 40 years, though they look and feel unread.

The packaged set, boxed in flimsy poster board, captures my attention. It is, after all, a collection, handpicked reflections and directives from the reams left behind by deceased divines. Across the centuries, their texts—whether in this abbreviated format or as full tomes—found homes by the hearths of readers, some of them wrapped in winter cloaks, a shield against the cold.

I place the packet of keepsake booklets in my tote bag—a reminder to keep my collecting in line. God only knows when, but my time will come. What will I leave when I’m gone?