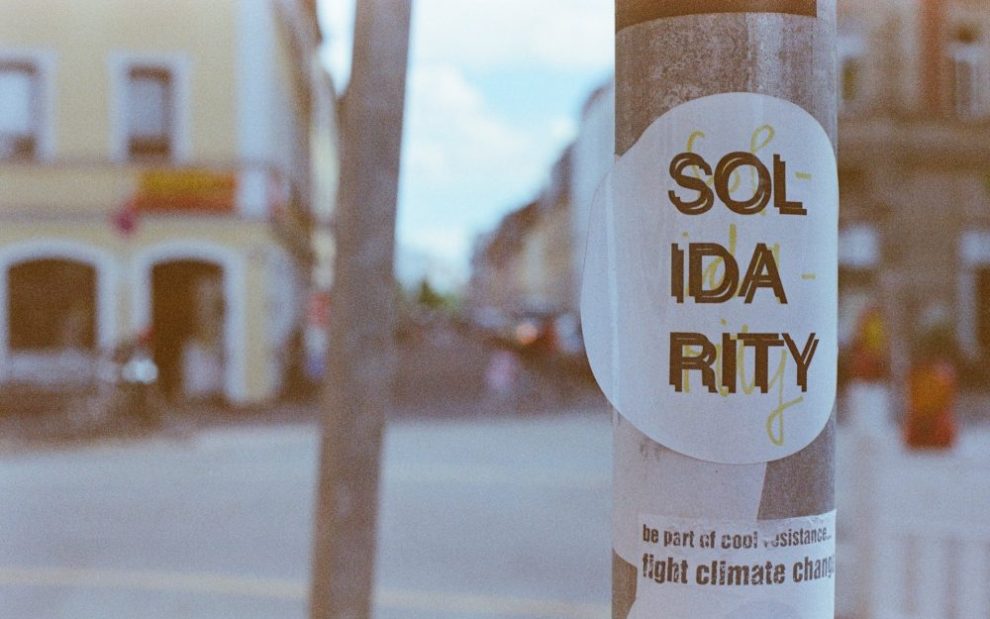 For many structural reasons, the United States has two large political parties. The parties talk about many different issues, but at least for the last 50 years a core argument has been over whether American society needs “more government” or “less government.” This is inevitably an oversimplification—for example, Republicans often want a large, strong military, and Democrats often aim to curtail government intervention, such as on abortion or cannabis. But generally, the party “brands” are pretty clear lenses.

It then becomes natural for American Catholics to think about their core principles of solidarity and subsidiarity through these same lenses. Democrats favor more governmental control, so they are for solidarity, but Republicans want less governmental control, especially at the national level, so they support subsidiarity. What’s a Catholic to do? Meet somewhere in the middle?

Our political lenses actually distort the Catholic tradition. Solidarity and subsidiarity are not opposite poles that pull in two different directions, somehow “balancing.” Rather, they are complementary ideas that help us see the common good at different levels. We need to put them together. To do so, we need to take off the partisan lenses that apply them merely to the debate between more and less government.

To understand this better, look at education. Everyone should agree that education is important for society—no one is “against” it. This is actually an important first step in solidarity! But how is education to be undertaken? Suddenly we find great, ongoing disagreement—over the role of larger state and federal authorities, the role of local school boards, the roles of teachers’ unions and principals, and the role of parents. Does Catholic thought have an answer for these problems?

Yes and no. No, Catholic thought cannot generate a specific answer about this or that specific policy. But it does have a general answer, and that answer starts with subsidiarity. Subsidiarity is misunderstood if it simply means “let the smaller, more local body do it.” It is not a choice mechanism for one or another group. Rather, it suggests that smaller groupings have their proper common good, and it is for the larger grouping to help the smaller groupings achieve those common goods when needed, without usurping the smaller groups’ authority.

Catholicism teaches that parents are the primary educators of their children. But from the founding of Catholic schools in America, it plainly does not mean that parents don’t need schools. Schools help families in many ways, not least by supplying teachers whose collective expertise surpasses any one set of parents.

The school (whether public or private) is the relevant community organized for the common good of the children’s education, in support of the parents of the community. The idea here is not to set the parents, the teachers of the local school, and state or federal officials against one another. The idea of subsidiarity is that each higher level helps, but does not replace, the authority of the lower level. When this subsidiarity works, every level works together for the common good—and that’s true solidarity!

What blocks us from seeing this solidarity within and among social groups? Two temptations blur our vision of subsidiarity-fueled solidarity. One is the temptation to individualism, represented by thinking about everything in society in terms of market transactions between individuals. When an individualist reads “the school helps the parents,” they expect the school to be like a restaurant or an airline, giving their children a market good.

But this approach forgets the school. Unlike patrons in a restaurant or passengers on an airplane, children in a school are not simply individuals getting particular services who happen to be in the same place. The school itself is a common enterprise, with its own common good. What parents want in terms of help is not simply for their own child to get a service. Rather, they want the common enterprise to succeed. In seeing everything as a market transaction, individualists overlook social wholes, like the school.

The other temptation is the collectivist one, the perennial temptation for a strong central authority that makes everything work right. Even the ancient Israelites plead with God for a strong king (1 Sam. 8) in order to be glorious like the other nations. (We can see how God ends up playing out that story by eventually sending Jesus.) In this picture, public authorities—centralized institutions, credentialed experts, and the like—must direct everything toward the common good. This view also, though differently, overlooks and often overrides all the social groups in the middle, viewing them as corrupt and self-seeking insofar as they don’t follow the direction of the central authority.

But historically, such central authorities often look out for their own interests or the interests of their social class. Moreover, they often lack the information and insight that only comes from on-the-ground encounter, and that (especially in a large country) is likely to vary widely in different places. By confusing uniformity with solidarity, collectivists are tempted in the same way individualists are: to dissolve the real, vital groupings of our lives where people concretely work together to achieve common goods.

When we practice seeing society as a Catholic, we see first not disconnected individuals and not governmental bodies. The first things we see are groups: schools, businesses, hospitals and clinics, neighborhood little leagues, orchestras and drama societies, churches, and families. Each of these has a common good proper to the group. For example, in Catholic teaching it’s true that businesses can and should serve individual customers. But, first and foremost, they are a “community of persons” that is doing some coordinated task together. Their common good is running a restaurant or designing buildings or educating undergraduates.

Catholics need to see the groups and their common goods first. From there, we can then understand both solidarity and subsidiarity, not as a balance but as two parts of the same whole, respecting the common good at different levels.

That all the groups need to be coordinated and work together to serve the broader common good of all groups, that’s solidarity. That each group’s own integrity and authority to pursue its common good needs to be respected, that’s subsidiarity. We might get a clearer vision of many social problems if we exchanged the partisan lenses of “government” for these Catholic lenses.