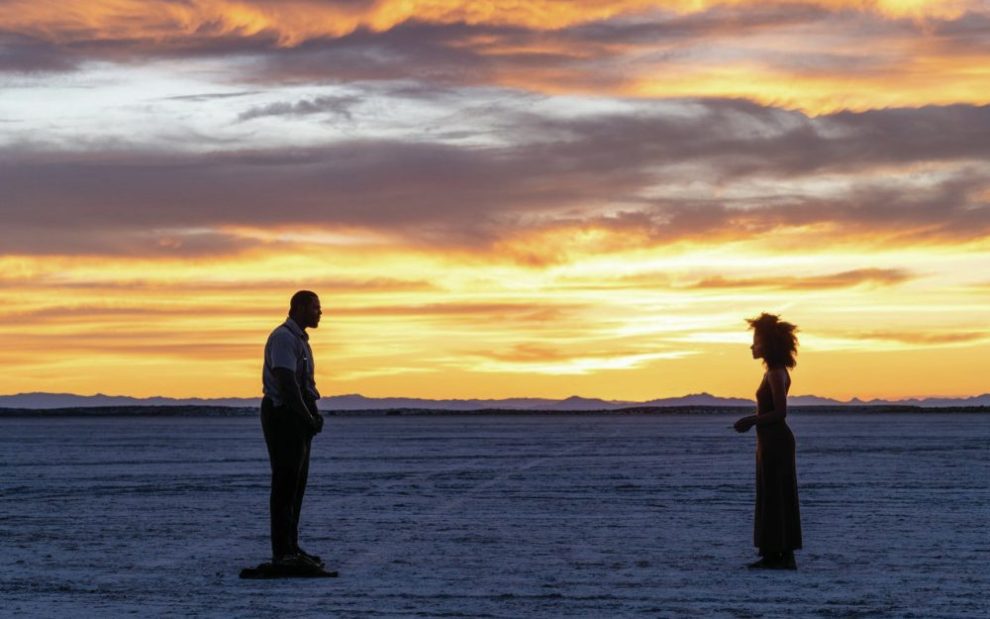 Who were you before you were born? Who will you be after you die? In church circles the responses to these questions might quickly move in the direction of theology and tradition, delving into notions of creation, ontology, and eschatology. While these theological subjects are important, I suspect that, for many of us, these questions might stir thoughts a little bit more personal and experiential. We may have thoughts like, “What is it that makes me me? What comes next? Will I still be me? Will I be with the people I love? Will I be happy?”

It’s on this level of prioritizing personal experience that two fascinating films similarly explore the “before” and “after” life. In the process of imagining existence before and after life, both films captivatingly find their essence in celebrating the simple but tremendous gift of being.

The first film, Nine Days (2020), was written and directed by Edson Oda. It is a story that takes place before life. Punctuating a vast desert landscape, we find here and there a modest house inhabited by an interviewer. They interview souls who arrive at their door hoping to be born. One of these interviewers, Will (Winston Duke), interviews a handful of souls all hoping to be chosen for one position, one life.

The other aspect of Will’s role is to watch the life of each soul he has chosen after they are born. He watches their lives unfold on an array of old television screens in his living room. He sees everything from their points of view, from the intrepid steps of a toddler, to the harrowing daily experience of a bullied teenager, to the joy of a wedding day. Will sees their tragedies and triumphs as everything is recorded for their files. All of this helps shape his judgment whether a prospective soul will have the opportunity to be born. He has nine days to interview each soul. Those who are not chosen cease to exist.

The crux of the film is a suicide Will witnesses on his television screen. He feels responsible for this death, as he chose this soul for life. It leads him to focus on the suffering and difficulties of existence. It also makes him reticent to choose a soul if he believes them to be too sensitive or ill-equipped for the tragedies of life.

His way of thinking is challenged by an interviewee named Emma, who is creative and filled with curiosity. Although not blind to the sufferings she witnesses on the television screens, she perceives more beauty than suffering. She knows that whether she is chosen or not, she has nine days to embrace her time on her own terms. She builds relationships, challenges assumptions, and finds her own meaning. In this “before” life, she already answers the great poet Mary Oliver’s stirring question, “Tell me, what is it you plan to do with your one wild and precious life?” She chooses to embrace her time now.

The second film, After Life (1998), was written and directed by Hirokazu Kore-eda. After Life is similarly constructed around interviews of souls. However, these interviews are of souls after they have died. In a telling reversal of Oliver’s question, the film seems to ask, “What did you do with your one wild and precious life?” The answers we hear are not only beautiful but often true.

Tell me, what is it you plan to do with your one wild and precious life?

In a large old building, souls gather not to be judged after they have died but rather to be asked to select one memory from their life to keep while all other memories pass. Each has seven days to choose one significant memory to take with them into what comes next. If they have difficulty, they can watch their life on old VHS tapes.

Once each soul chooses a memory, the interviewers then work with a crew to recreate this memory for them. They observe every detail, from recreating the type of red dress a young girl wore dancing as a child to making clouds out of cotton to help a pilot remember a moment of wonder and peace as he flew in his Cessna aircraft. After the souls watch their memories, they disappear.

Impressively, Kore-eda uses non-actors for most of the interviews. In preparing for the film, he recorded hundreds of interviews of people responding to questions about their most significant memories. He was so taken with their responses that he decided to include what he thought were some of the most touching memories.

Seeing these non-actors delight in watching their most significant memories recreated is more than just heartwarming. It is cause for personal reflection. What memory would you choose? What memory really makes you you? Why did you choose that memory?

Looking back on the film, Kore-eda observes, “Rather than a story about death, it’s about how one affirms one’s life.” In fact, this dwells at the heart of both films. Whether it’s nine days or 100 years, or whether it’s choosing a memory or choosing something to live for. Each film, whether looking forward or looking backward, ultimately settles on the importance of choosing to embrace the gift of life now. There are no right or wrong memories. They can even be complex and filled with the incongruities and tensions that are such a part of daily existence. But choosing a meaningful moment, or choosing a lasting memory, is choosing to “affirm one’s life.” And if we can affirm our own lives in all their complexity, maybe we can move beyond ourselves and affirm the lives of others in all their complexity.

Like Will in Nine Days and the interviewers and crew in After Life, we can step back and see the profound beauty and dignity of the lives of others. They too have their own “wild and precious lives.”

TagsCulture in Context Death and dying TV and film