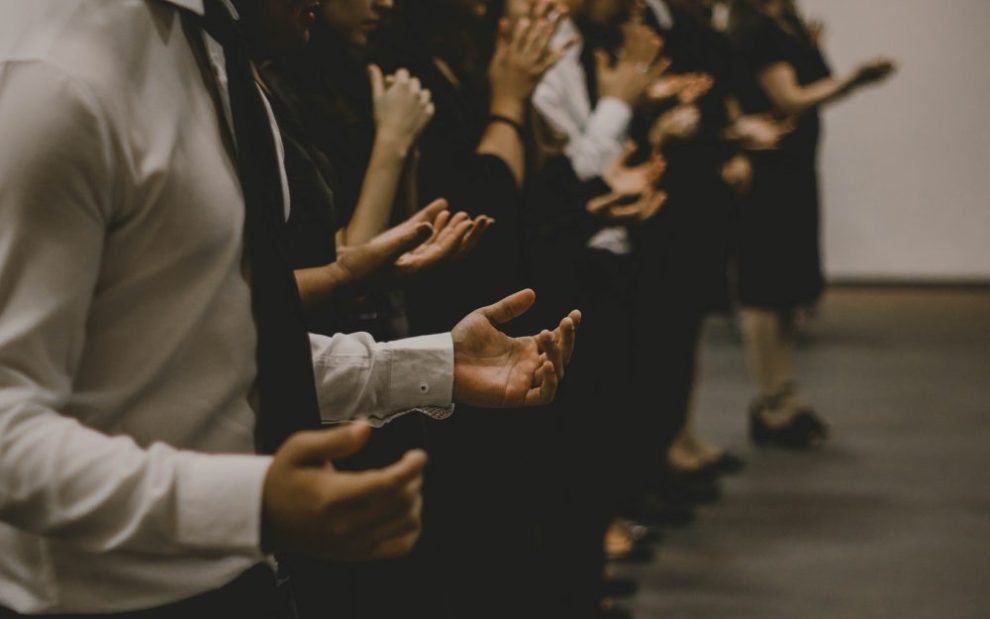 Recently, I was pacing through a pediatric ward to visit a child hospitalized for Respiratory Syncytial Virus (RSV) when I was beckoned into the child’s hospital room by the sound of loud and spirited prayers. When I entered the room, I saw a priest and family members invoking the power of God in a loud and spirited ritual, calling down the healing power of God upon the child. I overheard them praying that heaven should disarm and crush the enemy whose machinations were preventing this child’s full recovery.

Similarly, as the conflict in Ukraine became a full-blown war, I saw a news clip of worshippers at one of the holiest churches in Ukraine, St. Sophia Cathedral in Kyiv, placing candles at a side altar and energetically muttering prayers to God to intervene in the war upending their lives, separating families from one another, and causing a growing number of causalities.

It occurs to me that prayer is often a battle between the orientation of life in God and the disorientation of those that unsettle that equilibrium and harmony. In her book Notes of a Native Daughter: Testifying in Theological Education (Eerdmans), Keri Day describes prayer as a “warfare until we took our last breath.” In this scenario, prayer connects us with the power of God who is able to free us from the apparent captivity of the powers within and outside us that hinder us from experiencing the profundity of God’s gracious gift of freedom to humankind.

The disposition to use prayer to draw courage and strength to succeed, to thrive, and to prosper in the face of existential threats to our freedom has become a daily routine in many homes. Families living in high-crime communities invoke the power of prayer as they head out the door to school and work with the firm belief that God’s protection is all they need to remain safe.

Humanity is susceptible to weakness, finitude. and the propensity towards destructive behavior to ourselves and others, making praying with “fervid perseverance” (Eph 6:18) a necessary ritual. Because prayer is about speaking our longings for a joyous and peaceful life, we should be convinced that only by God’s intervention and support can our longings be achieved. This conviction comes from the knowledge of our limited ability to actualize our deepest yearning for happiness underpinned by our relationship with God.

There is very little doubt that the pandemic, for instance, exposed our human frailties and generated an urgent longing for God’s intervention in our lives to navigate pandemic-induced health challenges and economic difficulties. The feebleness of our human condition manifests in the growing mistrust of one another and institutions and in the anger and resentment that have accentuated our response to the pandemic. Therefore, prayer becomes a battle to regain our humanity as children of God against realities that are impossible to control as love of one another disintegrates from our social fabric.

Prayer makes God’s intervention a reality. It gives us solace and allows us to dream of victory, happiness, and flourishing in the face of harmful behaviors. The story of Paul and Silas in Acts 16:25–30 provides us refreshing knowledge of personal struggle against ruinous behavior that could prevent us from flourishing as God’s children.

Paul and Silas faced opposition to their ministry of making the world a place of peace and joy for those who welcome into their lives God’s invitation for relationship through Christ. Eventually, this opposition upended their ministry, and the provincial leadership in Philippi locked them up in prison: an example of opposition that can only be overcome through prayer and by collaboration with God. Paul and Silas’ chains and the prison walls are symbolic of the hostility against them and the rivalry and confrontation from those benefiting from divination (Acts 16:16, 19).

Paul and Silas were overwhelmed with resignation and confined to inactivity and a feeling of defeat. But they were undeterred; they engaged in prayer and singing, invoking the power of God to intervene on their behalf. God’s intervention was swift, liberating, and victorious; their prayer brought down God’s might (Acts 16:26). By the strength of their prayer, Paul and Silas won the war against their opposition in Philippi. They overcame the obstacles against them and upended the hostility from those who intended to restrict them from achieving their purpose in life.

When we pray during Lent, let us keep in mind that the power of our prayer can summon God’s presence and liberating grace upon us.

Time and again we face deeply inundating and crippling pain and sorrow, to the point of self-deprecating defeat, but the power of prayer washes us with hope and fills our lives with assurances of God’s support. Take, for example, the impassioned prayer of the tax collector in Luke 18:13. Moved by self-examination and introspection and profoundly humbled by his own limitations and weakness, the tax collector kneels, too ashamed to look up to heaven toward God’s face. He courageously utters prayers of contrition, seeking God’s powerful intervention to help him become the best version of himself just as God has made him to be in the world.

The tax collector’s prayer is an overt acknowledgment of his need for God’s intervention and support. Tax collectors were treated with disdain; people perceived them as professionally untrustworthy, and they were accused of being traitors to their people for their complacency in Rome’s heavy tax system in Palestine (see Luke 19:1–10). Therefore, the tax collector’s prayer in Luke 18:13 reveals both a personal struggle and society’s derision. It reminds us of our need for God and how prayer draws us into the presence of God. Through prayer, we experience the gratuitous gift of God’s power that helps us through the challenges and limitations of our humanity.

Knowing, therefore, that prayer is one of the pillars of our Lenten journey draws us deeper into the mystery of God’s providential presence in the world. To experience the presence of God, our prayer needs to exude a sense of surrender to God and an openhearted commitment to work toward the change we desire. The stories of Paul and Silas and of the tax collector demonstrate an openness and undisguised entreaty to God’s intervention. Whatever our longings are, when we pray this Lent let us be open to and nourished by God’s presence, confident in the good deeds we can accomplish for ourselves and for the world, because God is with us.

What does it mean to see God?