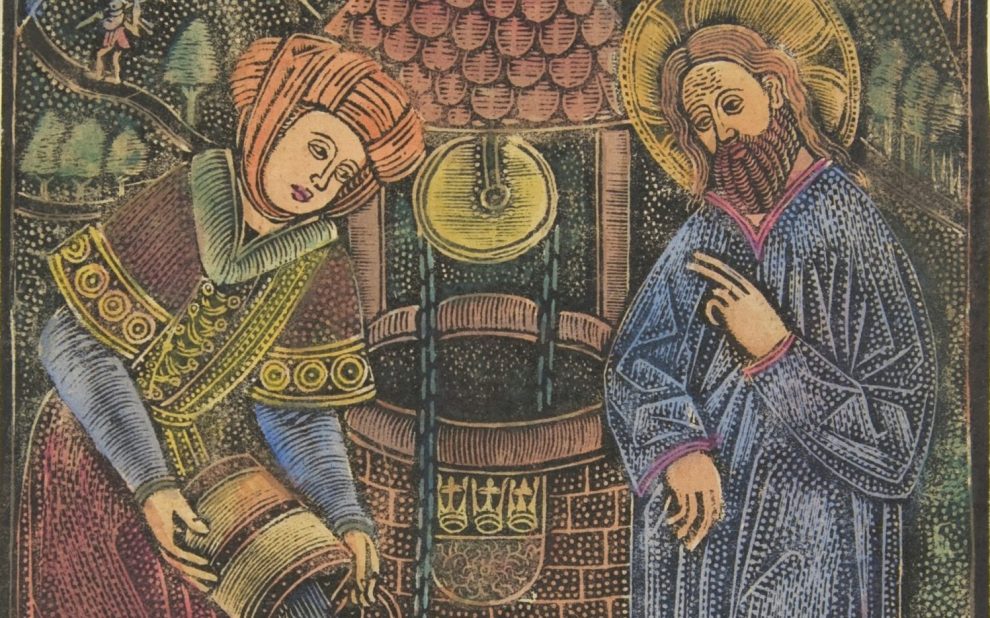 Scripture is chock-full of women who show up and stay put, who hold their own in spaces men decided they are not supposed to take up. For instance, a Pharisee scoffs at “what kind of woman this is who is touching [Jesus] . . . a sinner” (Luke 7:39). She anoints him anyway. The disciples gasp when they see a Samaritan woman talking with Jesus by the well. She talks anyway. Mary’s life would have been a lot less complicated had she said no to the angel’s odd invitation. She accepts anyway.

None of these women look for easy answers. Instead they look for Jesus Christ, the ultimate source of healing and wholeness. They believe in the Messiah. They believe in themselves too. The challenges they persist through—scandal, shame, suffering, insult, and pressure—ring true for many women today. We can find solidarity with our sisters in scripture.

Scandal splits. It keeps some people in one camp and others in another because “that’s how it’s supposed to be.”

The conversation between the Samaritan woman and Jesus at the well scandalizes the disciples for a few reasons. Jewish leaders—male leaders—did not talk to women in public. The gender difference creates scandal, as does the fact that Jesus is Jewish and the woman is a Samaritan. Jews and Samaritans were longtime enemies, divided over beliefs of the proper place for worship. When the woman sees Jesus sitting by the well, the proper thing for her to do would be to turn around and find a different well—to avoid scandal, in other words.

Glass ceilings certainly still exist across society, leading women to find creative ways to crack them. One such Catholic initiative is Catholic Women Preach. Theologically formed women across the globe reflect on the lectionary readings each Sunday and on select feast days. Their voices add much-needed wisdom to the homily circuit traditionally dominated by ordained men. Like the Samaritan woman, these female preachers have something to say and will not be deterred from saying it.

The woman who anoints Jesus’ feet persists through shame (Luke 7)

It is easy to imagine the woman from Luke 7 clad in shame as she weeps at Jesus’ feet. The town branded her a sinner. Beyond whatever she did, people point to something wrong with “what kind of woman” she is. How she must have internalized their judgment. How she must have felt the searing sting of shame cascade down her cheeks.

This woman shows up to the Pharisee’s house despite all the reasons running through her mind to stay away. She shows up to see Jesus. And Jesus sees her—the real her.

In I Thought It Was Just Me: Women Reclaiming Power and Courage in a Culture of Shame (Gotham), author Brené Brown describes how “women most often experience shame as a web of layered, conflicting and competing expectations.” Society holds certain expectations of how women should behave, look, act, and generally be in the world. Shame results when these unattainable expectations are not met. It lurks in everyday moments. Yet time and again, women wipe their eyes, wash their faces—or someone else’s feet—and forge ahead.

Suffering separates. It leaves those like the woman in Luke 8 anguishing in physical and emotional pain. Her community excluded her because of her hemorrhaging, deeming her ritually unclean. By the time the woman gets to Jesus, she must be exhausted. She must have tried countless doctors and remedies. Nothing was working. The woman knows she is not supposed to be out in the crowd. She knows the judgments people will pass as she seeks healing.

Yet she believes in Jesus’ power to heal. Nothing is going to stop her from getting his help. The woman elbows her way through the masses to get close enough to touch the fringe of Jesus’ garment. Her hemorrhaging stops. After being cast out for a dozen years, the woman bravely declares her faith for all to hear. She shares her story, which is part of the healing too.

During the COVID-19 pandemic, USA Today shared the story of NanaEfua Afoh-Manin, an ER physician in Los Angeles who, along with two other Black female doctors, developed a nonprofit that offered COVID-19 testing to communities in dire need.

Afoh-Manin felt the impact of “two pandemics [converging] at once”: COVID-19 and racism. Like the hemorrhaging woman, she did not give up.

“I’m gonna resist the knee on my neck,” Afoh-Manin said. “No matter what.”

Insults sting. Insults wielded by people we admire pierce like a migraine in the heart. Insults from the Son of God himself? Jesus’ words—comparing her to a dog—may have left an unparalleled sting on the Canaanite woman.

No one would have blamed her if she stormed off or jabbed back at Jesus. But she knows the most important part of Jesus’ identity: Lord and healer. Instead, she persists with poise, unflappable and full of faith. Her daughter needs help—and this mom isn’t going anywhere until she gets it. Her quick thinking impresses Jesus, who shifts his tone. He goes on to laud the woman’s faith and heal her daughter.

Women receive insults all the time. Sometimes it happens on smaller stages, like a lewd comment while crossing the street or a disparaging remark on social media. Other insults happen more publicly, like when Rep. Ted Yoho called Rep. Alexandria Ocasio-Cortez a derogatory term in front of the press in the summer of 2020. His slur set off a firestorm of feminist rage.

Pressure peeves. The gospel writer did not capture any dialogue between Mary and Martha—but it is easy to imagine the sisters exchanging some choice words. Martha, the head of the house, scurries around performing her hostess duties. She sees Mary sitting at Jesus’ feet, not lifting a finger, and gives both an earful: “Lord, do you not care that my sister has left me to do all the work by myself? Tell her then to help me” (Luke 10:40). Can you not see all that needs to be done?

No doubt Mary feels pressured on a few levels. For one, she does not assume the guest preparation duties typical for women. Mary also occupies a spot unusual for women when she sits at Jesus’ feet. Male disciples typically reserve this spot.

Mary believes there is nothing more meaningful than being in Jesus’ real presence. She would not succumb to the pressure to be anywhere else.

Women today face all kinds of pressure: to work for less money, to be primary caregivers, to look a certain way. Women are more than twice as likely as men to be diagnosed with an anxiety disorder, another sign of the pressure weighing on women in many aspects of life.

Carrying these heavy burdens, countless women continue to show up for their families, their colleagues, their communities, and their God.

TagsScripture Women in the church