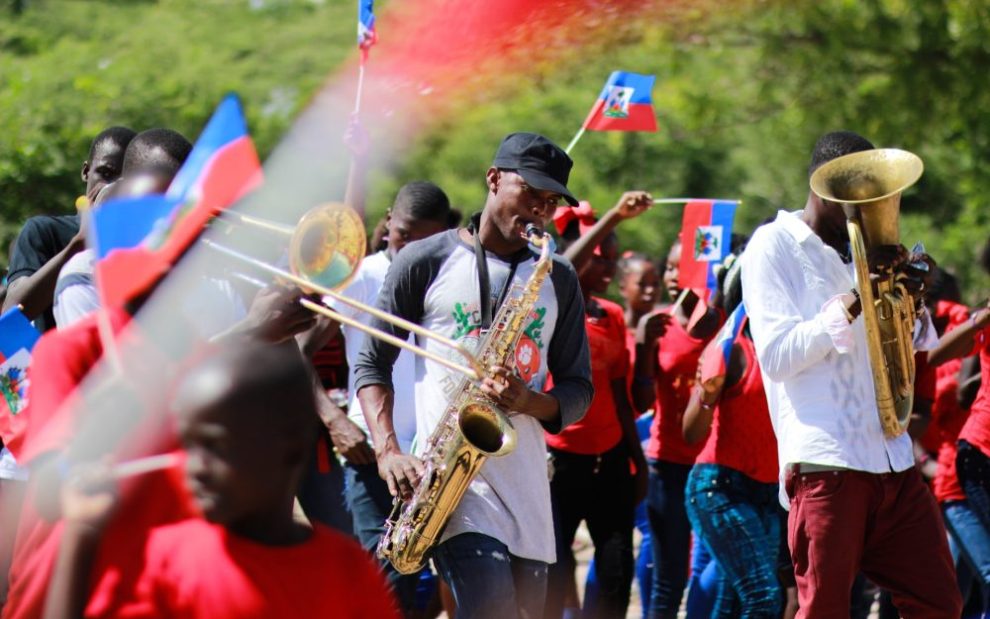 The past two years have been exceptional years of human existence. Here in the United States, while we were trying to survive and resolve a world pandemic, many Americans engaged in fervent protests against police brutality and the murder of Black Americans. The movement spread to distant shores, where citizens around the world demonstrated support for Black lives and rejected the centuries-long legacy of systemic slavery and global colonialism.

Upon his arrival in Hispaniola in 1492, explorer Christopher Columbus became one of the first and most violent slave-owners in what later became known as Haiti.

After the Spanish gave control of the Island’s western part to France in early 1697, the area, then known as Saint-Dominque, became the most prosperous French colony, producing much of the world’s sugar, coffee, and indigo. However, whenever we see an economy that is booming, we must ask who is paying the price of that production. My ancestors were among the people who were exploited by the French to satisfy Europe’s appetites.

In the 17th and 18th century, enslaved men, women, and children performed back-breaking plantation labor. This injustice was regulated strictly under the Code Noir enacted in 1685 by Louis XIV. These immoral legal impositions permitted the mistreatment of enslaved people, such as whipping and burning, in order to “encourage” hard work. The enslaved people lived such short lives the French had to replenish the continually depleted population with people stolen from Africa at the rate 30,000 a year.

In 1791, in reaction to continued dehumanization of Black lives, enslaved people on the north part of the island claimed their rights and stood up for Black lives.

This rebellion, which included the torching of plantations, stands as an important revolution in the history of the Black Lives Matter movement in the Americas. As a result, in 1794 France abolished slavery in all its colonies, declaring that “all men without distinction of color, living in the colonies are French citizens and will enjoy the right guaranteed by the constitution.” This was an eminent gain for the Black Lives Matter movement as the first time that slavery was officially abolished anywhere.

The edict did not last long. In 1799, Napoleon Bonaparte took position as the First Consul of France in the Americas and decided to govern Saint-Domingue and restore slavery.

Bonaparte soon became known as a violent general who represented the French army overseas and lost his biggest battles against the first Black nation to be forever free.

François-Dominique Toussaint Louverture, Haiti’s governor general, led an important protest in the modern history of Black lives. He was about 50 years old when he forced France to abolish slavery in Haiti and then united the Island of newly freed men, who called themselves the Black Jacobins of the Saint Domingue Revolution. Louverture then helped to create the nation’s constitution in 1801.

To restore order and quash the Black Lives Matter movement, Bonaparte sent a delegation to Saint-Domingue, led by his brother-in-law Charles Leclerc, with a fleet of ships and more than 40,000 soldiers.

With his intelligence, Louverture efficaciously outmaneuvered three French commissioners; successfully won 17 battles; defeated the British; outpowered the Spanish; and gave freedom to enslaved people. At the time of his 1802 deportation—suffering from severe wounds and the loss of several teeth after a cannonball explosion—Louverture passed the torch to his friend Jean-Jacques Dessalines, avowing, “Here, all men are born, live, and die free.”

In October 1802 Leclerc wrote to Napoleon: “We must destroy all of the black people in the mountains—men and women—and spare only children under twelve years of ages. We must destroy half of those in the plains and must not leave a single person of color men in the colony who has worn an epaulette.” This “war of extermination” failed, but resulted in  Louverture’s deportation to France.

In 1791, in reaction to continued dehumanization of Black lives, enslaved people on the north part of the island claimed their rights and stood up for Black lives.

Napoleon vowed to return the colonial order and bring slavery back to France and its Caribbean colonies. Rumors flew throughout Haiti that slavery would soon be restored. Dessalines motivated former slaves everywhere with the slogan, “Liberty or Death.” His goal was to distract the approaching enemy with fire, “so that those who come to re-enslave us always have before their eyes the image of hell.”

On the first day of 1804, Dessalines and his companions finally declared the independence that he had promised Haitians years earlier. As he said, “we must seize from the inhuman government that has for a longtime kept us in the most humiliating torpor, all hope of re-enslaving us; we must then live independent or die.” Haiti established the precursor to democracy with its constitution a year later. At that time, Haiti also reinforced the value of Black lives, stipulating in Article 2 that “Slavery is forever abolished.”

We are grateful for the battles waged by Louverture, Dessalines, and their companions, which also paved the way for the abolition of slavery in other nations, including the United States. However, while we are no longer fighting against slavery, we are still fighting for equality and justice for Blacks.

The systemic discrimination and police violence that continually bloom in the Black community’s garden stand as big threats to human lives in the 21st century. While our ancestors have given us this movement as a way to protect Black lives, the fight of keeping it remains a matter of breadth and depth.

It is easy to overlook the efforts of Haitians to give freedom to all captive people and justice to all nations, and to forget that Haiti was the instigator of this movement of justice. Instead, the French and British are credited with the elimination of the transatlantic slave trade. To silence the voices and impact of the Haitians who fought for freedom and announced to the world that Black lives do matter is to erase the true history of what matters for Black people in America.

Haiti’s bloody history is significant for all people today, especially those who claim to espouse the Black Lives Matter movement. With its centuries old demand that Black Lives Matter, Haiti was the architect of racial justice by abolishing slavery once and for all.

The systemic discrimination and police violence that continually bloom in the Black community’s garden stand as big threats to human lives in the 21st century.

Many other empires at that time attempted to ban the practice of slavery. France decided to abolish slavery after the uprising in Saint-Domingue in 1793, but reinstated it nine years later.

And although Haiti won its independence in 1804, it wasn’t universally recognized for decades. In the early- and mid-1800s, Haiti was isolated from trade and no nations recognized its independence, in order to maintain diplomatic relations with France. In fact, in 1825, France ordered Haiti to pay 150 million francs in exchange for formal recognition of its independence.

The British, after many attempts, halted the slave trade in 1807 and abolished slavery in 1833, but continued enslaving people in the Caribbean until 1838. This abolition act spurred a major rebellion in sugar-rich Jamaica in late 1831. This Christmas Rebellion lasted for 11 days and involved about 20 percent of the nation’s 300,000 slaves, leading to the Slavery Abolition Act of 1833, and the actual ending of slavery on the island in August 1834.

Of course, it was another 29 years before Abraham Lincoln—on another auspicious New Year’s Day—proclaimed the emancipation of U.S. slaves. It took a bloody civil uprising and several more years before the 13th Amendment, banning slavery, was ratified as part of the U.S. Constitution (in 1865).

The fight for abolitionism waged on, focusing on the path of bogus imperial powers including Portugal, Italy, Great Britain, Spain, and France.

What’s more, they never ceased to enforce their inhumane treatment of Blacks. They dismissed the reality and consequences of slavery and colonialism by requiring respect and imposing a quest for gratitude from those they subjugated and exploited, for ending the same violent systems that they created in the first place.

On the anniversary of two important dates in Black Lives Matter history—Haiti’s independence and Lincoln’s Emancipation Proclamation—it is important to recognize that the Black Lives Matter movement was originally intended to bring justice, equity, equality, kinship, dignity, freedom, and liberation to all those who were dying under the inhuman colonial system.

Of course, it was another 29 years before Abraham Lincoln—on another auspicious New Year’s Day—proclaimed the emancipation of U.S. slaves.

The work must continue.

We, the people, owe a debt of gratitude to Patrisse Cullors, Alicia Garza, and Opal Tometi, who in 2013 brought the Black Lives Matter movement into the age of #BLM. However, we must not forget the movement’s roots in the Americas, which reach back to 1791, when the enslaved plantation workers of Saint-Domingue first successfully stood up for Black lives.

We have a moral, spiritual, and ancestral obligation to pray, stand up, and act for the sake of these lives, and to be open for true dialogue, conversion of heart, national reconciliation, and profound healing.

America, there is cause for rejoicing here.