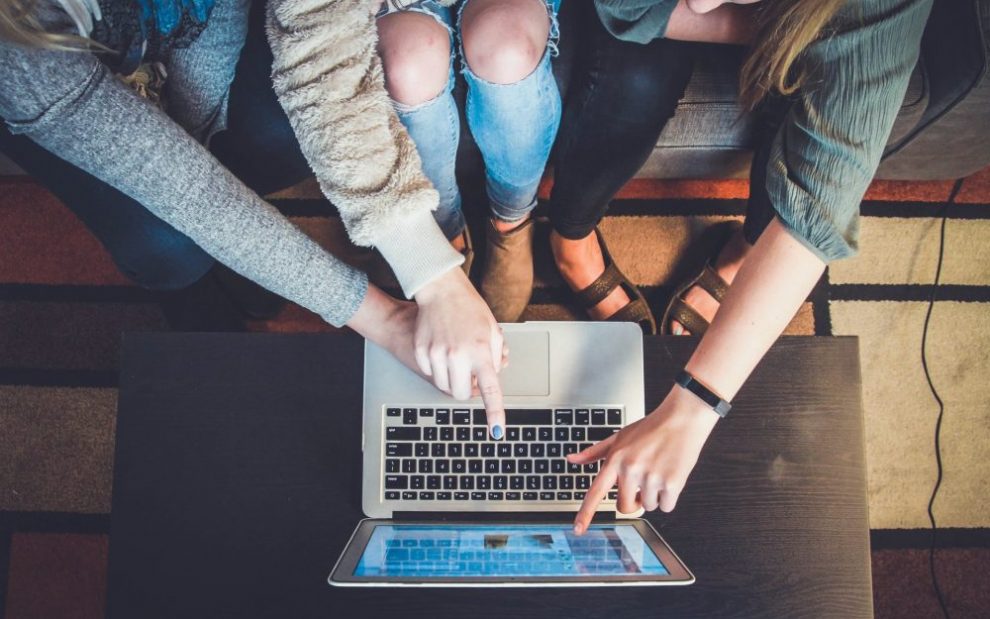 Talk of social media seems to be almost inescapable at this point. During the COVID-19 pandemic, social media became one of the last lifelines connecting many people to their communities as they shifted to spending most of their lives indoors. Yet this was hardly the beginning of our societal hyper-focus on the topic.

Long before coronavirus and social distancing entered the mainstream vocabulary, hordes of books, essays, and documentaries spent countless words and hours debating the effects of social media on the world at large. Many of these evaluations did not come to positive conclusions: Sites such as Facebook and Twitter are at best useful but highly dangerous tools that need to be carefully managed, they determined, and at worst a social blight that does little besides foster division, distraction, and exploitation.

But, if you ask U.S. Catholic readers, reports of society’s oncoming demise at the hands of social media have been greatly exaggerated. Contrary to the hand-wringing and worrying found in documentaries like Netflix’s The Social Dilemma or many a New York Times opinion piece, 85 percent of those who responded to our survey say that social media is generally a good thing. A whopping 75 percent even agree that social media adds something valuable to their life.

In fact, most respondents believe that social media is not only positive in general, but also helps them grow in their faith. Fifty-four percent of respondents say their time on social media has improved their faith life, while only 4 percent say it has degraded it.
“If St. Paul were alive today, he would be using social media,” says Robert Lucien Robinson of Vanier, Ontario. “It’s an invaluable tool.”

One oft-discussed concern about social media use is that it creates more isolation than connection and that it can become a substitute for real community and face-to-face human interaction. Some survey respondents voice a similar concern, including Tom Rinkoski of Minneapolis, who writes, “Social media, for all its color and glitz, seems empty to me. It’s too easy to just arrange images and words as if you were a marketer, instead of engaging in face-to-face time.”

“I need to use social media to keep up with family and friends,” says Robert Moore of Germantown, Maryland. “But I rarely post publicly. I just read.” Ron Signore of El Paso, Texas agrees, saying that his favorite thing about social media is having “instant contact with family in Chicago and Florida and getting up-to-date pictures of my 6-year-old grandson.”

This use of social media as a tool to stay in touch with real-life communities is reflected by the platforms survey respondents say they use: Seventy-eight percent are on Facebook, whose functionality emphasizes connecting with people you’ve met in real life and joining local community pages. Meanwhile, only 25 percent of readers use Twitter, a platform more suited to following celebrities and influencers and brimming with anonymous users.

YouTube is also a very popular platform, used by 66 percent of respondents. This might have something to do with the shift to viewing livestreamed Masses during the COVID-19 pandemic. This is the case for Mary Smith of Rochester, New York, who writes, “As an elderly person, I appreciated having YouTube so I could get access to Mass at home.”

Despite this, respondents list numerous strategies to turn these platforms into places where peace and community can thrive. Some, like Adele Berthelot of Gramercy, Louisiana, note that the most important thing is “always responding in charity.” Patty Amato of Claremont, California adds that even “if I say something mean, I go back to change or delete it.”

Others simply do their best to avoid known hotbeds for controversy. “Stay out of conflict and political conversations,” says Deb Keenan of Hamburg, New York.

It’s safe to say that survey respondents have no shortage of ways in which to interact with their faith online: Seventy-seven percent follow faith-based social media accounts. It is interesting to note, however, that much of this faith sharing seems to be lay led. When asked which Catholics they pay the most attention to on social media, the most popular answers—even beating out Pope Francis himself—are lay influencers, writers, and theologians, which 65 percent of respondents cite (60 percent selected the pope’s accounts, so he’s not too far behind).

The most frequently followed lay-run resource was the National Catholic Reporter, but readers also commonly mentioned smaller blogs such as Blessed Is She, Where Peter Is, and the Pillar.

Despite this preference for lay-led social media, when asked to name their absolute favorite Catholic social media account, one priest stood above all the rest: Jesuit Father James Martin. “I love Father Martin, because he is truthful, Christian, and pastoral,” says Linda Tuttle of Poughkeepsie, New York.

“I especially like Father James Martin,” agrees Ruth Hroncich of Brookfield, Illinois. “I think the Jesuits in general study things thoroughly and then present them in a way I can understand.”

Most readers surveyed were also very confident in their ability to avoid fake news and excessive bias online: Eighty-two percent of readers say they know how to find out if a news source is truthful, and the same percentage say they read news from differently biased perspectives.

When asked about their strategies for checking the veracity of stories, many listed websites such as snopes.com, factcheck.org, and mediabias.com as important resources. Katherine LeDuc of Escanaba, Michigan says, “I always look for more than one source for something before I post.”

While respondents have an easy enough time finding helpful and truthful places to learn about and grow in their own faith online, their propensity to share those resources with others on social media is comparatively muted.

Although 79 percent of respondents say that social media is an effective tool for evangelization, only a slim majority commonly take advantage of the opportunity. When asked how often they talk about their faith or share posts related to it on social media, 52 percent replied with “all the time” or “often,” while 48 percent said “rarely” or “never.”

This shouldn’t be seen as a cause for alarm but rather as room for growth. If we can gather anything from this survey, it’s that U.S. Catholics have been able to form remarkably healthy communities online—and ones with a strong emphasis on lay involvement to boot. It’s easy to be hopeful that, after a period of growing together, these communities may soon begin to blossom outward into the world at large with much greater fervor.

TagsScience and technology Sounding Board