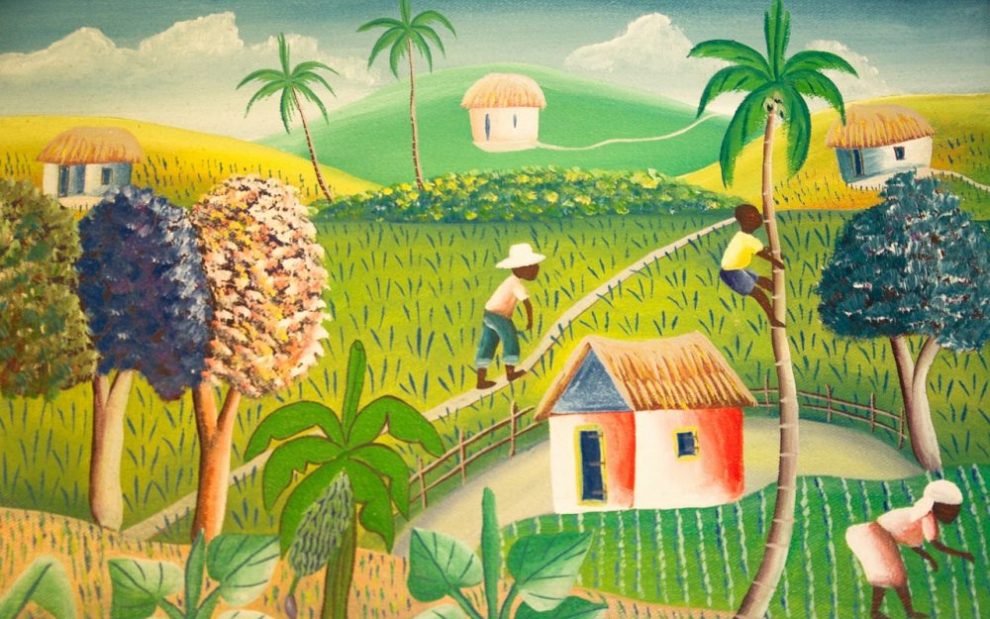 The 2010 earthquake, catastrophic flooding in 2016, a deadly hurricane in 2020: It seems that whenever Haiti is in the news, it’s in connection with a disaster. And now, once again, Haiti has made the headlines. First, on July 7, foreign gunmen assassinated Haiti’s president. Then, on August 14, a 7.2-magnitude earthquake struck the island, killing more than 1,400 people. Is this Caribbean nation just terribly unlucky? Is it cursed by God? Or is it simply the victim of a series of unfortunate coincidences?

I believe the answer to all three questions is no. Haiti’s long history of crises has masked the true state of affairs. Haiti is a proud nation, with a rich cultural heritage and a history of tenacious courage and resilient dignity—but it has been the victim of racial oppression since its beginnings. That oppression has undermined its strength, making it vulnerable to both natural catastrophes and political corruption.

A desperate need for change

In 1983, when St. Pope John Paul II visited Haiti, he said, “Things must change here.” Nearly 40 years later, the conditions the pope observed persist. If anything, they have grown worse. Today, 2,500,000 Haitians live in extreme poverty. Two out of 3 Haitians live on less than $2 per day (U.S. currency), and 100,000 children under the age of 5 suffer from acute malnutrition, while 1 out of 3 children has irreversibly stunted growth. Less than 50 percent of Haitian households have access to safe water, and only 25 percent have adequate sanitation.

But when you read these numbers, do not make the mistake of reducing Haiti to the poverty-stricken “hole” that a former president described. I was born in Haiti, and my parents live there now. I grew up hearing stories about the nation’s proud culture and history. I know there is far more to Haiti than meets most Americans’ eyes.

As followers of Christ in the United States, it is time we listen to what Haiti has to say to us. Christ’s example teaches us to reach out with respect and compassion, rather than with condescension and judgment. If we recognize Haiti’s dignity, complexity, and hope, as Christ did whenever he spoke with those whom his society had rejected, we can help create new possibilities for this neighbor nation. We can follow in the footsteps of Jesus, who said, “The Lord has anointed me . . . to liberate the oppressed” (Luke 4:18, 19).

St. Pope John Paul II’s plea for change in Haiti can only come about when Americans understand Haiti’s long history of oppression and recognize that the United States helped create the Haiti that exists today.

Haiti is a proud nation, with a rich cultural heritage and a history of tenacious courage and resilient dignity—but it has been the victim of racial oppression since its beginnings.

In 1492, when Columbus claimed Haiti’s island for Spain, he already foresaw how the land could enrich Europe. The island he named La Isla Española (the “Spanish Island,” which today contains the modern nations of both Haiti and the Dominican Republic) did indeed bring riches to Spain, Holland, England, and France. By the 18th century, the island was a French territory, and its original inhabitants had been almost completely wiped out. Instead, hundreds of thousands of enslaved Africans were now producing the sugar, coffee, indigo, and cotton that made white Europeans wealthy.

Slavery in Haiti proved exactly how vicious the institution could be. In the 19th century, a former enslaved Haitian described what he had seen and experienced: human beings tortured and slaughtered—hung upside down, drowned in sacks, buried alive, crushed with mortars, dumped into swamps to be devoured by insects, boiled in cauldrons of cane syrup, or thrown to hungry dogs. So many enslaved people died from ill-treatment and disease that the entire Black population turned over every 20 years. Slavery ate people alive—and then demanded more.

Despite this, the human spirit remained strong within Haiti’s enslaved people, and at the end of the 18th century, they were among the first to insist that Black lives matter. They forced the French Republic to declare universal emancipation, and they then defended their freedom against Napoleon Bonaparte’s army. Finally, in 1804, they created the second independent state in the Americas. Under the new nation’s constitution, Blackness no longer meant bondage but rather freedom and equality.

Slave-owning Americans were not happy to hear about a successful revolution against slavery. Politicians who were still praising the American struggle for independence now condemned the Haitian one as barbaric and brutal. U.S. news commentators and historians failed to recognize the bravery and intelligence of Haiti’s leaders.

Despite this dismissive attitude on the part of Americans, Haiti’s and America’s identities were intertwined. Ongoing travel and trade between the two nations meant that Haiti contributed to American art, music, and cuisine, as well as to the 19th century’s abolitionist movement and the 20th century’s civil rights era. Furthermore, the map of the United States was forever changed when Thomas Jefferson purchased the Louisiana Territory from France, thanks to Haiti’s revolution, which had forced Napoleon to abandon his dream of a French empire in the Americas. Haitian courage and persistence ultimately helped the United States gain one-third of its landmass.

It would be a form of racial reparation to build a friendship with Haiti that’s based on equality and solidarity instead of the condescension of racism.

Nevertheless, American policy toward Haiti has been racialized since the beginning. Founding Father Thomas Jefferson recommended that the Black population in Haiti be “reduced” so that France could regain control. Then, in 1825, the United States said nothing when France forced Haiti to pay a substantial amount of money for the “property” lost during the Haitian revolution, including the value of the workers who had freed themselves from slavery. This money was given to the former enslavers or their heirs. In return, Haiti gained immunity from French military invasion—and a burdensome debt that took 122 years to pay, rendering the Haitian government chronically impoverished.

In 1868, President Andrew Johnson recommended the annexation of Haiti, saying that this step would be necessary for U.S. economy and security. Johnson failed to carry out his plan, but in 1915, President Woodrow Wilson did invade Haiti, beginning an occupation that lasted until 1934. The Haitians, said Wilson, had an “inherent tendency to revert to savagery,” and thus needed the United States’ “civilizing” guidance. His motivation had little to do with protecting the Haitian people; instead, he wanted to ensure the safety of a potential U.S. naval base. During this time of occupation, American soldiers ran wild across the Haitian countryside, stealing farm animals and raping women, including girls younger than 12.

American troops were again clearly visible in Haiti in 1994, 2004, and 2010. Each time, U.S. leaders professed to be advancing Haitian interests and stability, but they did nothing to help Haiti construct a serviceable infrastructure, create its own strong military, or build a sustainable system of government.

In the twenty-first century, Haiti is what analysts call an “aid state,” a nation that can only remain alive with foreign help. And yet that “help” never solves the real problems. Even the U.N. peacekeepers who came to Haiti after the 2010 earthquake were responsible not only for a cholera epidemic but also for sexual abuse and exploitation. Instead of strengthening Haiti’s government and people, aid has in many cases undermined both.

Between 2010 and 2020, according to the New York Times, Haiti received 13 billion dollars from the international community, with more than half of this amount coming from the United States—and yet Haiti remains in a chronic state of crisis. This is partly because the nation lacks a healthy banking system; when money goes to Haiti, there’s nowhere to keep it, and thus no way to distribute it in practical ways that help people in need. Instead, the funds end up furthering an already corrupt political and economic system. Meanwhile, the international community, including the United States, retains its power to dictate Haitian affairs. In effect, the financial aid becomes bribe money.

If the United States continues to send money and troops, without helping Haiti build strong institutions or empowering Haitians to help one another, then it will only contribute to the nation’s ongoing instability.

I pray that Haiti may one day achieve her immense potential for freedom, creativity, and stability. But I do not believe that more foreign troops or money will make that happen. As Marlene Daut, a professor who focuses on Haitian history at the University of Virginia, recently told Slate, “Ultimately, the Haitian people need to have a say in what happens next. It can’t just be more of the same: elite men taking power and keeping power.”

We can speak out for a truly Christ-like policy.

Haiti needs education and mentoring. It needs help building an infrastructure that can adapt to Haitian needs, and it needs empowerment rather than interference. Monique Clesca, a Haitian writer and activist, agrees. When asked what the international community could do now to help her country, she told Slate, “Certainly not invade us. Certainly not send us troops. Let us deal with the issue and find solutions rather than impose one on us.”

It is time for Americans to think differently about Haiti. Haitians are creative, talented, and enterprising. They are tired of centuries of outside interference; they are yearning to lead the conversation that discerns their future direction. It would be a form of racial reparation to build a friendship with Haiti that’s based on equality and solidarity instead of the condescension of racism.

The United States needs to reconsider its agenda in Haiti. As U.S. Catholics, we can do our part by listening to the voices coming out of Haiti—and then amplifying those voices so that others will also listen. We can speak out for a truly Christ-like policy, one that seeks to honor Christ’s command to love our neighbors as ourselves (Mark 12:31), doing nothing out of selfish ambition or self-interest (Phil. 2:3).

As you read about Haiti in the news, do not look through the ancient lens of racial stereotypes. Instead, look with the eyes of Christ.

Things in Haiti must change.