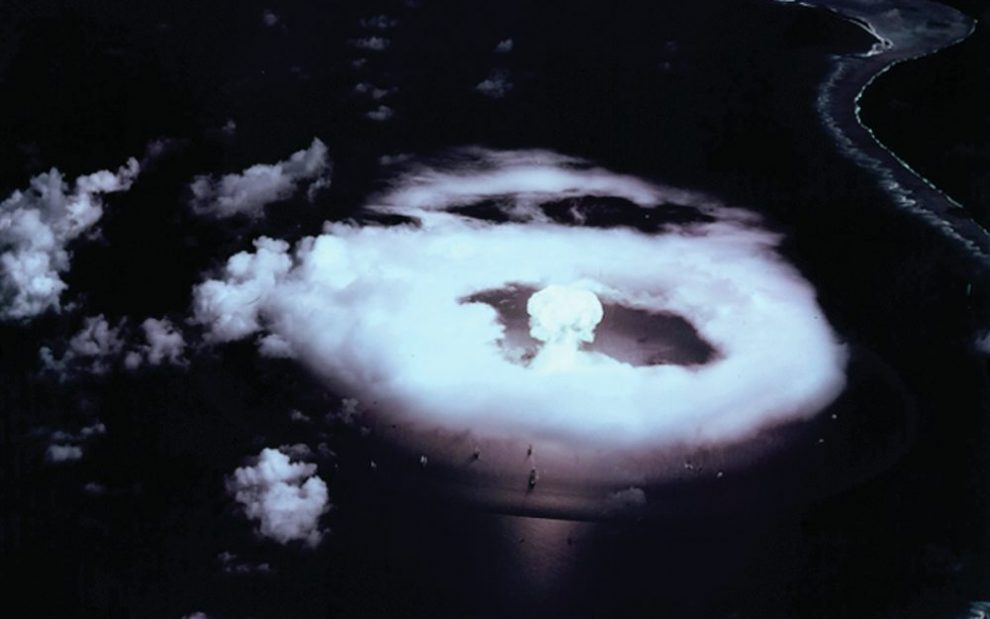 You can be forgiven for not noticing it, but the nuclear bomb became a global outlaw in January. No ticker tape parades followed after this sudden outburst of peace. But it’s true—it happened. Folks touting “ban the bomb” ever since the world entered the nuclear age with a double atomic attack by the United States on Japan finally got their wish. The bomb is verboten.

The United Nation’s Treaty on the Prohibition of Nuclear Weapons went into effect on January 22, three months after Honduras joined 49 other states in ratifying the treaty. More will follow. Representatives from 122 states voted to approve the treaty in 2017. The treaty prohibits the development, testing, production, stockpiling, stationing, transfer, use, and threat of the use of nuclear weapons. Its organizers call it an “unambiguous political commitment” to a world free of nuclear weapons.

The ban leaves a few recalcitrant states in the embarrassing position of maintaining weapons systems that the rest of the world has declared hopelessly immoral. China, France, Great Britain, India, North Korea, Pakistan, Russia, and the United States are declared members of this small club, and Israel is a presumed member.

U.S. defiance of the bomb ban ought to be especially embarrassing to U.S. Catholics. The Holy See was the first U.N. member to ratify the treaty in September 2017, and the Vatican has been in the forefront of the abolition campaign in recent years.

The Holy See had in the past offered conditional acceptance of the possession of nuclear weapons as a deterrence to nuclear attack, as long as that represented a temporary position on a path to full nuclear disarmament. In recent years, objecting to the slowing pace of disarmament, the continuing existential risk posed by nuclear weapons, and plans for trillion-dollar modernization programs proposed by the United States and other nuclear powers, the Holy See has pulled away that moral cover.

During a visit to Japan in November 2019, Pope Francis, observing that a “world without nuclear weapons is possible and necessary,” renounced deterrence. “One of the deepest longings of the human heart is for security, peace and stability,” he said. “The possession of nuclear and other weapons of mass destruction is not the answer to this desire; indeed they seem always to thwart it.”

“The possession of nuclear and other weapons of mass destruction is not the answer.”
—Pope Francis

No one expects the members of the nuclear club to suddenly abandon their bombs now that abolition is a reality. The ban is a gesture, but it is one that is strategically targeted. The truth is the rest of the world has wearied from being held hostage to the nuclear ambitions of a handful of nuclear-armed nations. The rest of the world is no longer willing to accept the catastrophic humanitarian risk nuclear weapons represent. While only these nine states are capable of deploying nuclear weapons, every nation shares the risk of their possible use.

Maintaining weapons systems in defiance of U.N. treaties and conventions, sad to say, is not exactly a new position for many of the nuclear bunch. The United States, for example, persists in the manufacture and deployment of land mines and cluster bombs despite U.N. treaties and conventions that abolished them. But that doesn’t mean those U.N. agreements have not forced significant changes in U.S. policy on those outlawed weapons.

Treaty proponents hope the abolition of nuclear weapons will provoke a similar examination of conscience. In the meantime, the Catholic Church in the United States, emboldened by the position of the Holy See, should find its own voice again. It has been almost 40 years since U.S. bishops issued their famous peace pastoral. Perhaps it’s time they again step up to challenge the diabolical complacency that manages this vast investment in the machinery of death.­