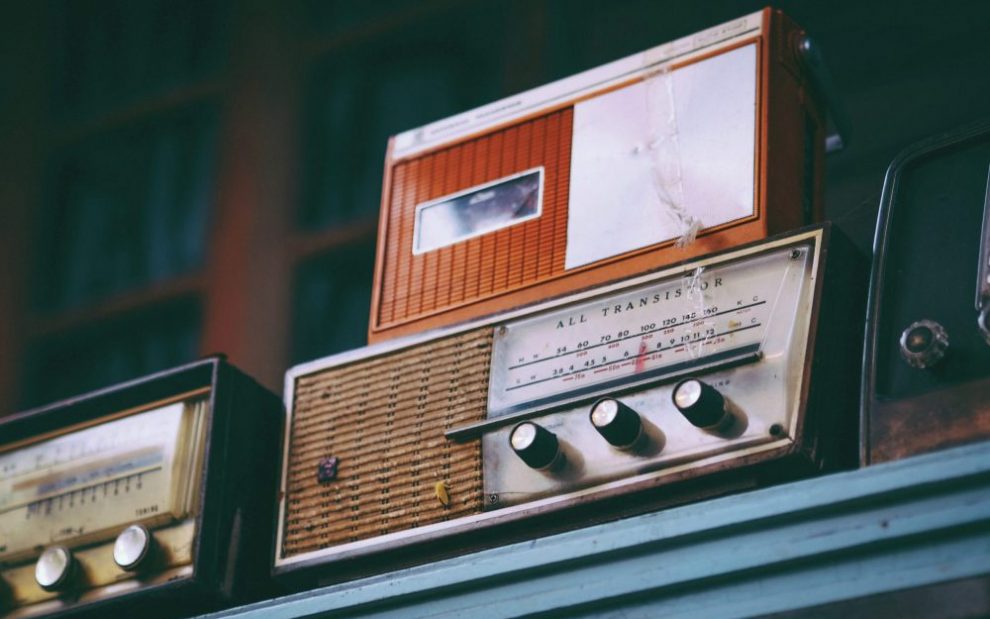 I remember my first radio. One Christmas morning in the early ’60s, I unwrapped a tan, boxlike radio with a sloping face and three dials: an on/off switch, a station finder, and volume control. Now I could listen to my own music!

Every Sunday night my family gathered for dinner. Invariably, my dad put on a record and we listened to Big Band, Hawaiian, or Americanized Irish music such as “McNamara’s Band” or “When Irish Eyes Are Smiling.” I grew to hate the stuff.

Every morning my mom tuned our kitchen radio to KYW 1060 to catch the news and weather. Eventually she bought a weather radio for the kitchen, and we listened to the broadcasts until we left for school. Now, driving along Lake Shore Drive in Chicago on my way to work, I listen to the news and weather.

With my own radio, I tuned to WIBG-AM and filled my bedroom with the sounds of rock and roll: The Beatles, Elvis Presley, The Rolling Stones, Chuck Berry, and Elton John were now my world.

My brother, unknowingly, introduced me to folk music. On his side of the bedroom I found albums by Simon and Garfunkel, Woody Guthrie, Pete Seeger, Kate Wolf, and others. From folk music I moved to protest musicians such as Phil Ochs: His song “Crucifixion” stirred my soul.

In 1975, at my deacon assignment, I learned the words to “Lift Every Voice and Sing.” People there also introduced me to gospel music. During the racial tensions in my next assignment, I found comfort in the St. Louis Jesuits’ “The Cry of the Poor.”

From folk music I moved to protest musicians such as Phil Ochs: His song “Crucifixion” stirred my soul.

In 1986, on a wilderness canoeing trip in Canada, I asked one young female chaperone about her hobbies. She said she played Celtic music on the mandolin. Since she didn’t bring her instrument on the trip, I asked her to sing one of her songs. I felt my Celtic roots resonate in recognition of their heritage.

At the college campus ministry in Springfield, Missouri, I was moved by the students’ praise and worship music. Later, when I travelled between Springfield and Chicago, I listened to a full variety of music. Whenever I put on Les Misérables, I was brought to tears. Jean Valjean, Cosette, Fantine, and Marius drew me into the plight of the poor and their redemption.

Now, living at Claret House, at dinnertime we listen to a variety of music from the United States, Mexico, Cameroon, the Philippines, and Vietnam. The other day the Chicago Tribune had a review of the K-pop group Blackpink. And you know what? I like them.

The other day the Chicago Tribune had a review of the K-pop group Blackpink. And you know what? I like them.

My appreciation for music continues to grow. But what songs can speak to these times? Folk? Praise and worship? A good Celtic ballad? My favorite, “Imagine” by John Lennon?

Sadly, with the rise of nationalism in our country, I think Phil Ochs’ “Power and the Glory” is significant in this era: