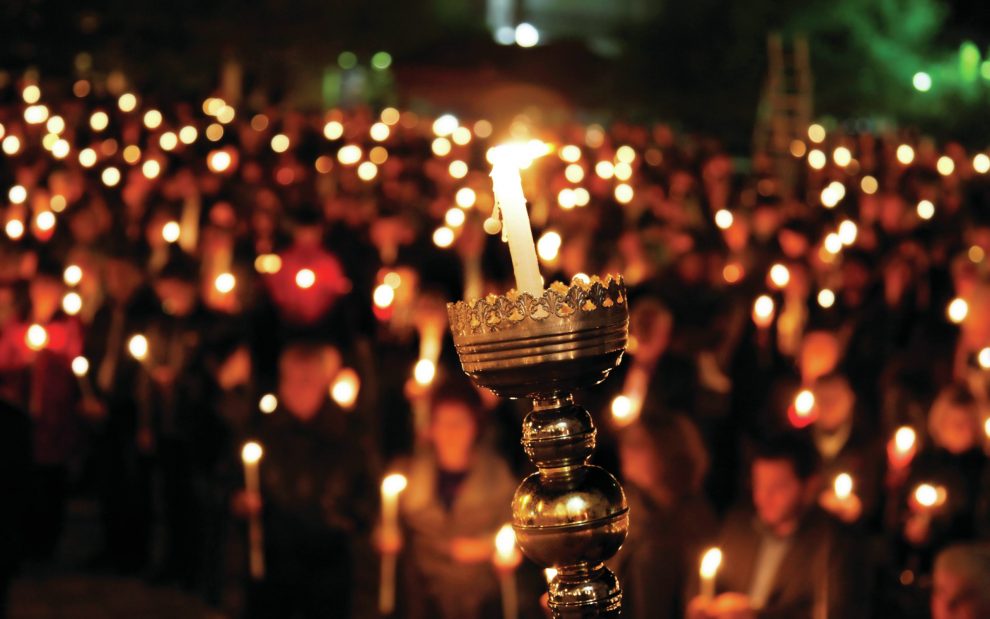 As a story loses its history, it gains its meaning. This is never truer than in stories shared among families about their common memories. Over the years, the tales of what occurred loosen their grip on “just the facts.” They take on a patina that transforms mere reporting into a mythology of who we were, are, and might yet become. Such stories become greater than history. They become legend.

I can’t say anymore how anything really happened way back when. Was my brother, Teddy, really the mystical figure in childhood that I now paint him to be? Ted died 20 years ago, so I have no present point of comparison. I can’t check my recollections against his. Without Ted before us in the flesh, what my family possesses of him now are the stories.

They are our precious means of keeping my brother alive and represented in our gatherings.

The stories we tell of young Teddy roaming the local hills looking for encounters with God are unassailable now. They do capture a certain essence of who my brother was. They link up with other memories: of Teddy at 13, piously going off to a seminary in another state—one of those institutions that still took boys who voiced an interest in the priesthood.

As it happens, the chief financial officer of that establishment embezzled the funds three years later and bankrupted the place. The boys were sent home until another seminary could be located to enroll these teenagers. My brother chose not to leave home a second time. He finished high school instead, thrown into a mix of secularized adolescents like a lamb to the wolves. And somehow he survived.

Ted went on to college, but he didn’t ever lose that inclination for spiritual things. He married, had children, and became a physical therapist with a genuine healing gift in his hands. He also played the clarinet and saxophone. He continued to be deeply connected to the church, serving as a lector and on the parish council. The mystical boy matured into a pious man. The last time I saw Ted before he died of cancer at 50, he and I sang hymns together on his sofa in each other’s arms.

My cameo version of my brother is now the gospel of his life. This is how scripture is made.

My brother was many more things than what this limited portrait of him reveals. Yet in the two decades since his death, his half-century of history has collapsed into a mythology which has become, for me, who Teddy is. His shortcomings and annoying habits have been shaken out. Eliminated too from this picture is the lonely gravestone bearing his name and dates; not to mention his two grown children whose stories continue. My cameo version of my brother is now the gospel of his life. This is how scripture is made.

When we read the Bible, it’s good to keep in mind that it’s not a history lesson. Nor does it pretend to be comprehensive coverage of who these people were and what they did.

While I’m sure the disciples often stood around Jesus listening to his teaching, they also did many other things not recorded. They mostly ate not miraculously supplied or sacramentally significant meals sitting on the ground. One of them belched and the others laughed.

In the same way, so much is recorded of Paul delivering fine speeches and writing formative letters. But Paul also spent many days walking great distances and sometimes stopped to rub his sore feet, fretting that he hadn’t bartered for better sandals. Mary Magdalene certainly had bad hair days. And, for all we know, she had a great singing voice and a terrific grasp of Christology that eluded her companions. James and John may have had second thoughts about leaving their father’s boat and nets behind. Some days, Peter’s wife wished they’d had more children.

Clearly the Bible isn’t the whole story, but more like the “Best of” (and sometimes “Worst of”) episodes from a deeply concentrated tribal memory. The long-vanished tale of that memory crystallized into legend, and more recent parts contained historical details—though highly selective and edited by time and utility.

When we read the Bible, it’s good to keep in mind that it’s not a history lesson.

It’s the church’s task at the Easter Vigil each year to serve up only the highlights of that final product, which we call salvation history, in an elongated liturgy of the Word. Keep in mind that even if all 73 books from Genesis through Revelation were proclaimed in their entirety at the Easter Vigil—which would surely last through the whole Octave of Easter!—we’d only be offered cameos of how God rescues humanity time and again in every generation. The Easter Vigil presents nine carefully chosen snapshots from that compendium to portray how divine rescue is continually made transparent on the earth.

Most parishes, in turn, will take the option to present only six of these readings: The creation story. Moses at the Red Sea. Isaiah’s come-to-the-water invitation. Ezekiel’s pledge of a restored community. Paul’s promise that those who die with Christ will live with him. And, of course, one gospel story of the empty tomb, which changes depending on the cycle we’re in.

If your liturgy team braves the disapproving clock-watchers and takes the nine-reading route, the assembly will also hear of the time Abraham nearly sacrifices his son Isaac. Isaiah supplies a second prophecy about how, as hymnist Dan Schutte puts it: “Though the mountains may fall and the hills turn to dust, yet the love of the Lord will stand.” The six-reading short version also cheats us of a rare opportunity to hear from Jeremiah’s scribe and fellow prophet Baruch. Baruch rebukes a complacent Israel for abandoning their walk with God on the peaceful road of understanding: “You have forsaken the fountain of wisdom” (Bar. 3:12). He counsels those who claim to be God’s people to learn prudence from the God who can call, and dismiss, the light at will.

Let’s pause for a moment. Since most of us going to the Easter Vigil this year won’t have the chance to hear this declaration from Baruch, we might want to read it for ourselves (see Bar. 3:9–15, 3:32–4:4). The same God who says, “Let there be light” in Genesis has the same authority to declare, “Let there be darkness”—and the lights go out. Creation isn’t an absolute; it’s not a done deal. This wonderful, vibrant, living world of ours is a divine decision. And it can be revoked. Prudence is required, Baruch urges, to restore us and our world on the way of enduring peace.

The Easter Vigil presents nine carefully chosen snapshots from that compendium to portray how divine rescue is continually made transparent on the earth.

Of course, if you’ve been to an Easter liturgy, you know where these biblical vignettes, breadcrumbs on the path of rescue, happily arrive. The liturgy of Easter moves from light to light: from the original summons of the light in Genesis, all the way to dawn at the empty tomb. The light passes from the Easter fire to the paschal candle to the distribution of courageous little flames throughout the assembly.

Even from lockdown last year, watching the Easter Vigil at home, I lit candles throughout the apartment to remind me of church around the world, participating unseen in this liturgy of our joy and hope. Those winking lights against the darkness weren’t the whole story of who we are as church, I know. We’ve got a lot of bad patches that need shaking out and have a long way to go to make the leap from history to legend. Each dawn is an opportunity for each of us to light another candle.