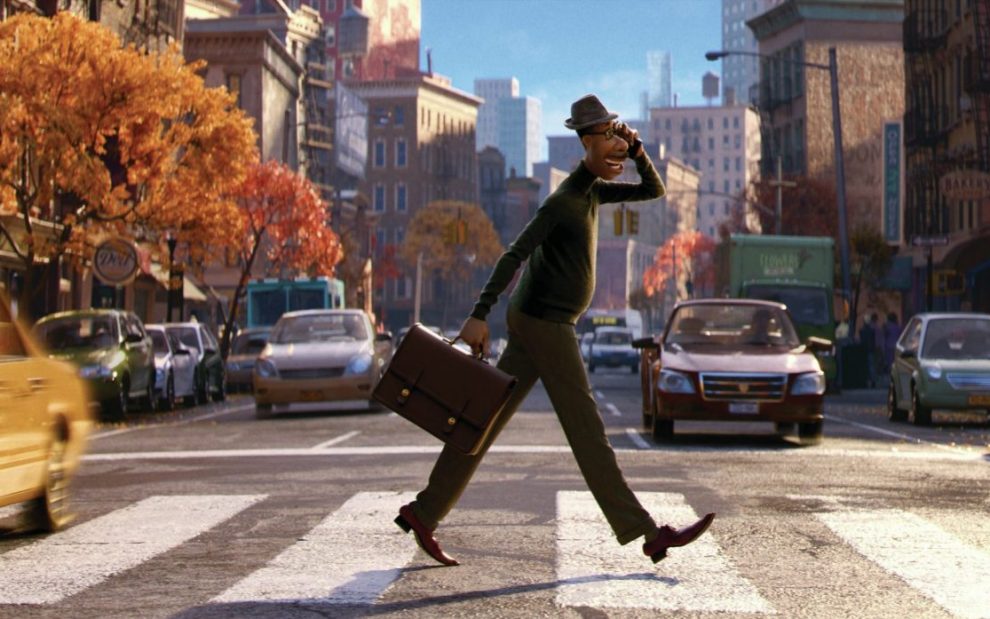 Parents with more than one child know this already: Babies show up with personalities, differences, and strong attitudes toward broccoli, music, and siblings.

There’s nature, there’s nurture, and then there’s just what you get—and who the heck knows where that stuff comes from?

In Pixar’s Soul, now streaming on Disney+, director Pete Docter (Monsters, Inc. and Inside Out) attempts to answer that question along with defining the meaning of life and identifying a soul’s central purpose. These are hefty tasks to pack into a full-length animated feature and still hope it appeals to the entire family. Well, it doesn’t, but it’s remarkable, worthy, ambitious, and quite likable, as long as you’re not a 6-year-old troubled by anxiety about death. If your 6-year-old is already reading Thomas Aquinas, grab the popcorn.

The job of a middle school music teacher gets a bum rap in this film. The lead character, Joe, teaches band and treats it like a fate worse than . . . well, you get the point. Instead, he wants to be a jazz musician. Just as he gets his big break, he abruptly drops through an open manhole and finds himself on the way to the next place, cosmically speaking. He’s not dead, yet—his body is on life support and his soul wants to skip all the transcendental possibilities and just get back to Earth to play that great gig. This isn’t even a spoiler to be alerted over, because it happens in the first minutes of the film.

So Joe’s flirting with eternity and hanging out with all the little baby souls that haven’t yet come to Earth in a place called The Great Before, a world Docter and his creative team imagined with richness, irony, and humor. Souls are big-headed blue-green blobs that are shepherded around by guides who resemble Pablo Picasso line drawings and who capriciously cut a few souls from the herd now and then to shuffle them off into pavilions where they will acquire traits like self-absorption and insecurity. Souls introduce themselves as if they are cheeky descriptions for fine wine: “I’m an agreeable skeptic who’s cautious yet flamboyant.” “I’m an irritable wallflower who’s dangerously curious.”

Soul asks us why we are the way we are.

There’s an exceptional depiction of what happens when humans become so lost in creation that they float in bubbles of glowing energy, are at one with their art, and enter The Zone. There’s also a depressing rendition of lost souls who wander bleak landscapes, disconnected from life by despair, selfishness, or video games. One soul cries that she isn’t good enough, that she makes bad decisions, that she is a loser. Oh, the violence we do to one another and to ourselves with our words.

When a soul acquires enough badges (kind of like Girl Scouts), it gets launched down to Earth. As Joe tries to get back to Earth, his fate becomes enmeshed with that of little Soul #22. The pair insert themselves into the wrong earthly bodies. That plot device is perhaps the most tedious of the film (the other is the predictable ending). The Great Before is fantastically imagined, and why Joe didn’t want to hang out there long enough to ask a few metaphysical questions, I don’t know. The audience sure wanted to stay.

A narrative that calls for Joe, the first Black lead character in a Pixar film (Jamie Foxx), to be voiced through most of the film by a white female actor (Tina Fey) is worth concern. Animated films and cartoons have an ugly history of racial exaggeration and stereotyping, and Black characters in films are sometimes written as being willing to sacrifice themselves for the betterment of white ones. Yet the gender-blindness of that casting aligns with the film’s depiction of souls bounding around without gender, race, or sexuality. This might be read as a sensitive piece of casting rather than as a tone-deaf one.

Much has been reported of Docter’s enlisting an inclusive cadre of artists and creative consultants (along with codirector Kemp Powers) to helm the film’s multilayered racial representations. When a soul happily heads toward the spinning Earth, it’s not aimed at North America. Souls are not white Disney characters colored darker beige. They are marvelously rendered and appealing humans in a range of skin tones and body types. No waifish fairy tale princesses with waspish waists. Actual, you know, people.

The mostly Black cast includes Phylicia Rashad, Angela Bassett, and Donnell Rawlings, who is such fun as Dez the barber that you wish Joe needed another haircut before the movie ended. The music is sophisticated and ardent and involves at no point a singing bird or dancing teapot. The depiction of Astoria, Queens glows with warmth in a richly jeweled palette and what sure seems like natural light and shadows.

Someone must have been in The Zone.

Soul asks why we are the way we are, which almost completely determines our success in life, relationships, and work. When Joe composes a tune to a bagel and a pizza crust (just trust me on this), the beauty and wonder of everyday existence are celebrated. And we start to see the point.

From our locked-down and isolated sofas, viewing the crowded New York City streets bustling with bodies and energy feels nostalgic. Soul shows us not only what we might be missing about the point of living, but also what we are missing right now: live music, haircuts, and standing on a corner in a crowd waiting for the light to change. There is tremendous artistry here. Someone must have been in The Zone.

TagsCulture in Context Death and dying TV and film