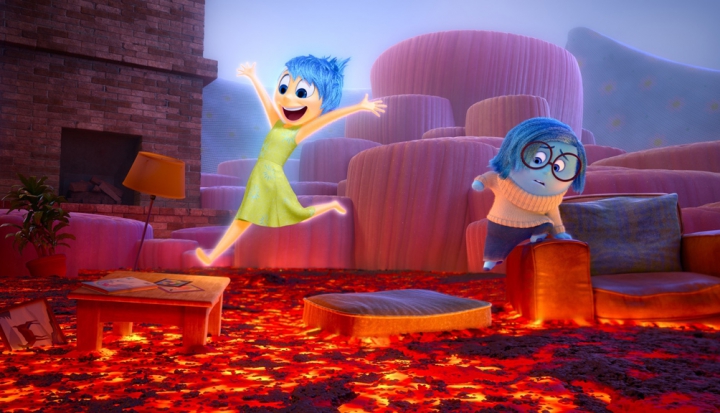 The premise of Pixar’s latest film Inside Out is fascinating: Eleven-year-old Riley moves from ice hockey-loving Minnesota to broccoli pizza-loving San Francisco. Enter Joy, Sadness, Anger, Disgust, and Fear, the personification of emotions who run Headquarters in Riley’s head.
For most of Riley’s life, sweet and resilient Joy has handled the control center. The move across the country, however, leaves Riley numb, except for sporadic outbursts by Anger, Disgust, and Fear.
The parallel story between Riley’s inner and outer life is the stuff of great conversation. Inside Out gives viewers an elaborately detailed map that illustrates the motivations and concerns of a girl going through a painful time. Filling out the landscape of Riley’s mind are her Islands of Personality and a forgotten imaginary friend named Bing Bong, who roams the recesses of Riley’s long-term memory.
What’s particularly fascinating about the film is the case made for Sadness. Sadness, Joy tells us, well, she doesn’t know what Sadness is there for. As Riley falls deeper into confusion and depression, Joy fights to retain control, but Sadness, as we all know, will eventually have her day.
Riley’s numbness melts and Sadness rushes in. Riley can no longer be made happy by the stuff of childhood. She has to mature. If she wants to have Joy, she has to have Sadness, too.
While Inside Out doesn’t steal the top slot among Pixar films from the perfection that is Up, it does come close. Both of these films about transition have sadness in them, but there’s something unbearable about Riley’s sadness which makes the film—and its popularity—all the more brave and surprising. Inside Out is not a joy to watch, but if you recognize the deep need for sadness, this film is for you.
This review appeared in the September 2015 issue of U.S. Catholic (Vol. 80, No. 9, page 42).
Image: Courtesy of Walt Disney Pictures
TagsTV and film