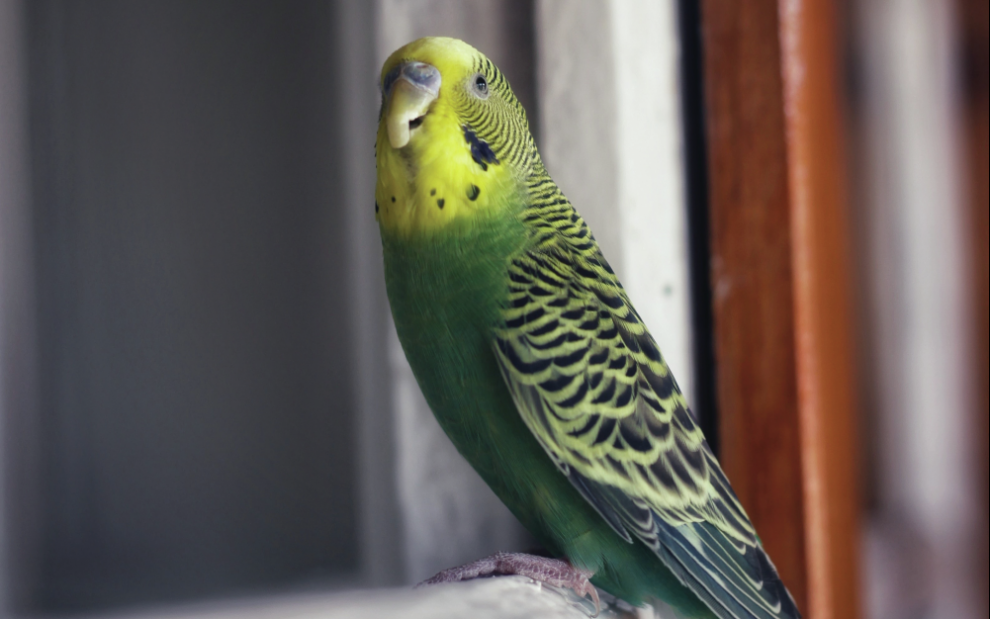 It’s Lent again. The anniversary of pandemic. It was this time last year that Petey came into my life unbidden. She left the same way. Coming and going, this budgie has marked me, as indelibly as her bright yellow back, lime green belly, and embroidered black wings marked her.

I never really looked at birds before. Now I notice them all. Petey gave me this gift: seeing the oceans of life teeming in the sky and trees around me.

This escaped parakeet showed up early in the COVID-19 crisis in my New England neighborhood. Everyone on the neighborhood website was talking about her and photographing her. At first everyone assumed she was male, which is how she got her name. In the early days she was mostly yellow and looked like a balletic flying banana peel. We had no idea where she came from.

A legend arose that Petey’s owner had succumbed to the pandemic. This pet was then released by relatives who didn’t want to care for a bird. At any rate, Petey now belonged to the world outside. She took to it like a birthright. Live free or die, as we say in this part of the country. Seeing the elegance of her flight, you could never imagine confining this beautiful creature to a cage.

Spring became summer and then fall. That’s when local voices began to worry. Parakeets come from Australia. Only in St. Petersburg, Florida have they established a flock outdoors in the United States. Here, Petey had no mate and no flock. She was a lone budgie in a hostile society of sparrows, nuthatches, woodpeckers, jays, robins, and cardinals who viewed this freakishly bright newcomer as an alien.

I scolded the other birds for chasing Petey away from their feeding grounds. But I felt like a poor moral guide, as a member of another species that discriminates against color.

The neighborhood chatter moved to attempts to capture the budgie and encage her before winter. A website recommended hosing her down until she was too wet to fly and then pouncing on her. My soul cried out at this indignation. Live free or die, Petey, I begged my little friend when she’d come by on her daily rounds, playing peekaboo with me around the columns of my porch.

Sometimes Petey seemed like the Holy Spirit come to bring us courage in our lonely hours.

We had become obsessed with the plight of this bird as a kind of projection of our own situation. Because of the pandemic, many of us felt encaged as we watched this gorgeous animal play and soar, flashing her yellow brilliance in the sunlight. When she visited us—on our balconies, in our yards, or on tree branches outside our windows—it was a bright reminder of the world we missed and mourned in our captivity.

Sometimes Petey seemed like the Holy Spirit come to bring us courage in our lonely hours. Was capturing her in order to save her life the right thing to do?

While Petey’s fate hung in the balance, I received the news that my best friend, Erin, had died. Erin and I are—were—both in our mid-60s, and she lives—lived—in Denver. We’d known each other for 25 years and had the habit of exchanging emails every morning. Hers was the longest, deepest, and most enduring conversation of my adult life.

The idea that Erin was suddenly gone was devastating. She didn’t die of the virus. Like a lot of people, she had an undiscovered cancer that rose up and took her in a matter of days. I knew she was sick. Under pandemic conditions, it was weeks before I learned of her death.

Erin had put off going to the doctor, though she noticed she was losing weight. Her sister, for whom she was the primary caregiver for over a decade, had died in January. Erin attributed the weight loss to grief. Then too, going to the doctor, or anywhere, in the opening days of the pandemic seemed perilous.

So much else took her attention away: The awkwardness of planning a funeral for a family that didn’t go much for religion. Closing the house and distributing her sister’s possessions. Planning what to do next. Moving finally into a condo. Erin had hardly unpacked the last box and was preparing for Act II of her life when it was suddenly over.

“What do you know, Erin?” I asked softly.

“That I need to prepare to die,” she said simply.

As we lurch again through yet another Lent, we bear with us all the losses of this costly yearlong season of penitence.

And that’s what Erin did. She called for an anointing, received the final sacraments, and undertook the morphine drip for the pain. While she was awake in those final days, she texted folks in her phone book a quick goodbye-and-thank-you for all the love they’d given her. Between bouts of texting, Erin slept under the influence of the morphine.

And then she didn’t wake up. No one knows how far into her phone book she got. But I know I didn’t get the news that all of this happened in mere days, not weeks. I didn’t know until her name showed up in a parish bulletin as deceased. Someone who read it out there had the charity to call me.

It’s been a year since the world got sick. A lot has happened under this pandemic. I can’t know what the death toll will be like when you read this, nor the conditions under which we’ll be living. But a lot more people will have died of a lot of things, including this awful virus. And the effects of climate change will have led to the deaths of people and other species that exist in a world that God so loves that saving it, and us, has been the number one preoccupation of the divinity since creation.

As we lurch again through yet another Lent, we bear with us all the losses of this costly yearlong season of penitence. Deaths, sickness, and lingering disability. Loss of jobs, homes, security, marriages, and more. The education of a generation has been jeopardized.

We’re nationally traumatized by so much loss, including our faith in government and in each other, in the fabric of society to pull together and not apart. Jesus on the cross cries out in the hour of abandonment: My God, my God, why have you forsaken me? It can feel like hope itself has abandoned us in hours such as these.

Jesus on the cross cries out in the hour of abandonment: My God, my God, why have you forsaken me? It can feel like hope itself has abandoned us in hours such as these.

Yet Erin found a way to die that was also a way to truly live. God bless her for that. She’s opened a door through which I hope I have the courage to follow. I carry an Erin-shaped hole in my heart that can never be filled. And I don’t want it to be. I want it there to remind me that a great soul has passed through my life and I’m proud to still call her my friend.

But Petey. I don’t know what happened to her. Did she die of the bitter New England winter? Did someone secretly spray her down and cage her up? Did she find respite somehow, somewhere, out of view? Budgies are nomads. Maybe she made it to Florida. In my dreams, Petey still soars free.